Two Strangers and a Grocery Store 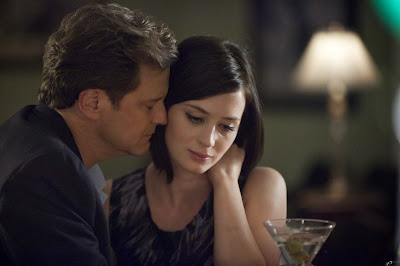 Arthur Newman has the distinct honour of being the first film I ever rented from the machine at the grocery store. It’s not a bad deal at $1.50 a night. It also seems like a pathetic, Arthur Newman-y thing to do. There’s just something about the transaction that connotes one’s life as hopeless.


Arthur Newman, né Wallace Avery, decides to give his pointless life some meaning when he fakes Wallace’s death and escapes with a new identity. Arthur, played by Colin Firth, is a sad sack with a job he doesn’t like, a girlfriend (Anne Heche) he kind of likes, and an ungrateful brat of a kid he loves, but who doesn’t show him an ounce of love in return. It doesn’t seem any less pathetic, though, to watch Wallace shirk his responsibilities and hit the road.

Arthur’s journey takes some odd, if convoluted, detours as Mr. Newman saves the life of a drifter/kleptomaniac/potential prostitute named Mike (Emily Blunt). Mike, née Charlotte, is also running away from life. In typical movie fashion, these two complete strangers decide to take their journey of self-(re)discovery together.

The British actors play a pair of silly Yankee doodles that feel more like caricatures of people than the real things. Arthur Newman takes the couple through a series of vignettes in which they dive into increasingly erratic behaviour. They play some golf, break into houses, dress in peoples’ clothes, and have sex in strangers’ beds. None of the shenanigans makes this pair of unlikable characters any more endearing.

Arthur Newman lets the viewer look at Mr. Newman with a critical eye. He’s a stiff, stodgy, and fairly unpleasant guy, which is surprising since he’s played by one of the most likable actors working today. Firth, however, is disappointingly bland in Arthur Newman. Blunt, on the other hand, offers a more dynamic turn as Mike. Mike tries to escape her family’s history of mental illness by acting crazy so she can fit the part before she wears the label. Blunt’s unpredictable performance makes Arthur Newman bipolar, though, when she serves as Firth’s reaction shot, for the stars of Arthur Newman have surprisingly zero chemistry. This road movie ultimately feels aimless when there isn’t much shape or character moving it along.

Arthur Newman is a disappointing and aimless character study. The plodding journey around the countryside puts the talented pair in some awkwardly staged scenarios. In between the pair’s nefarious behaviour and some bizarre bonding scenes between Heche and Arthur’s son, Arthur Newman offers some trajectory of the protagonists coming to terms with the lives they fled. The screenplay delivers this mostly by enjoying some interplay with the characters’ names, alternatively having Arthur and Mike address each other as “Charlotte” or “Wallace” when their true character breaks through the façade of the affair. Arthur Newman, however, never plays as anything but a façade.

Arthur Newman is now available on home video.
(You can pick it up at the grocery store for less than two bucks.)