A Don and a Dime 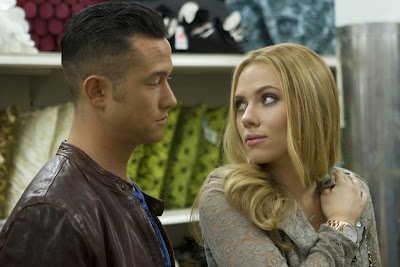 Don Jon, which marks JGL’s feature debut as a writer and director, might be the most porn-heavy flick depicting addictions of a sexual nature. Sex addiction was tackled heavily in 2011’s Shame and humorously in 2012’s Thanks for Sharing, which is just making its way into release now, and for the third recent tryst with sins of the flesh, Don Jon feels like a refreshing first date.

Don Jon might be the one of the three films to judge its flesh-loving protagonist most openly and strongly. Jon, dubbed “the Don” by his friends thanks to his way with women, isn’t a particularly likeable guy. He’s a douchey Guido sleazebag who would fit in well with the cast of “Jersey Shore”. Arrogant, aware of his good looks, and cocky beyond redemption, Gordon-Levitt presents the audience with a guy who gets what he wants, but for whom the gets are never enough.

Case in point: Jon and his boys (Rob Brown and Jeremy Luke) are scoping out the babes at the local hot spot and grading them on a scale from one to ten when Jon spies a total dime in a red dress. Said dime is Barbara, played by a sultry Scarlett Johansson, is a perfect ten: gorgeous, nice, fun, flirty, well-rounded, and somebody Jon can take home to mom and dad. (He surprisingly cares about more than having a girl who’s a piece of ass.) Sex with Barbara isn’t as good as sex with ladies on the Internet, though, and Jon sneaks away from late night cuddling to sit alone in the dark with his laptop.
The Don also feeds his love for PornHub during his dates with Barbara. She doesn’t put out quickly enough for Jon, instead offering him awkward teenage dry humps over home base. Barbara is a catch, but she simply can’t match the pornographic amount of fantasies and fetishes that are a click away.

A bit like Steve McQueen’s Shame does Gordon-Levitt build the mentality of addiction that fuels Jon. McQueen, for example, opens his film with a cyclical rhythm in which sex for Brandon (Michael Fassbender) is as basic an urge as getting up in the morning and going to the bathroom. It’s a regular bodily function. Ditto The Don, whose habit is just as routine as toning his muscles at the gym or going to church once a week. (Although Don would have to go to church three to eleven times a day to keep the likeness accurate.)

Don Jon shows how Jon’s addiction is fuelled by the rampant sexism in contemporary media. Jon and his father (Tony Danza) slurps spaghetti at the dinner table whilst watching a buxom babe in a bikini go down on a chicken sandwich on TV. The sandwich is much more than a piece of meat, the commercial’s narrator says, but he mentions nothing of the woman. More images proliferate the film, like the movie within a movie that Jon and Barbara see on their first date. It’s a sugary fantasy that Barbara watches with a smile on her face of Amélie-like escapism, but Jon just thinks it’s fake and corny. He doesn’t realize, though, that all the moans and groans on PornHub are just as false.

Less successful, though, is Jon’s bizarre text-addict sister (Brie Larson, who is currently earning raves for Short Term 12) who remains a silent presence in the film aside from the clacking on her mobile. She even texts in church! Jon’s family is a true oddity—and perhaps a mild offense to Italian-Americans—as the histrionics of their pasta-dinners are loud, gaudy chitchats about traditional families. They’re also mildly indicative that Jon’s addiction is hereditary, as his dad treats Jon’s mom (Glenn Headley) as background noise as he checks out Barbara’s backside at the table or, better yet, her cleavage in church. Sins of the flesh run in the family.

Johansson, on the other hand, continues her banner year of seductive performances with Don Jon. Playing the object of the male gaze without seeming like another one-dimensional centrefold is a tough feat of pull off, but Johansson makes it work. Her Barbara plays perfectly to Jon’s lust, yet the composure of her performance tells the audience that there is more to Barbara than meets the eye. Johansson is palpably seductive in Don Jon, especially since she plays Barbara almost like a well-mannered tease, getting the audience hot and excited without ever having to strip. The allure isn’t just in her physical beauty: it’s in her behaviour and her confidence. Take her first date with Jon. Barbara shows up in a casual leather jacket that hugs the curves of Johansson’s body. Barbara teases flirtatiously and the big wad of bubble gum she tosses around with the luscious lips Jon desires shows that she is aware of her aura and her power over men. (The sight of Scarlett Johansson chewing gum might be the sexiest thing to hit the screen all year.) Like her alien in Under the Skin, Johansson’s Barbara is a man-eater, but she is exactly what The Don needs to set him straight. She sets the screen on fire and steals every scene of Don Jon in which she appears.

The strong performances from Moore and especially Johansson also help balance out the ickiness of Don Jon’s addiction. Moore gets the most complicated—if strangest—role as the seasoned hippie who befriends Jon in his night classes. She’s the first female character Don Jon sees with a third dimensions. Filtered as something other than carnal appetite, although the performance has plenty of sex appeal, Moore creates a woman damaged by the loss of substantial connections. Placed alongside with Jon, Esther conveys that porn offers only temporary satisfaction. The payoff of relationships, rooted in love and communication, is not nearly as accessible as they seem in Jon’s fantasies, but Don Jon shows that their buffering time is worth the wait. It's a promising first step for Mr. Gordon-Levitt