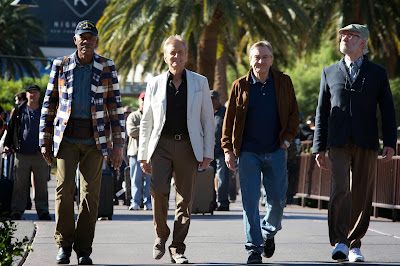 If the seventy-seven year-old Robert Redford dies tomorrow, he will exit Hollywood on a very high note. Redford’s performance in the current release All is Lost is a career best for the Hollywood icon and it shows what highs an actor can reach when he takes risks long after he has nothing left to prove. Some of Redford’s contemporaries—Michael Douglas, Robert De Niro, Morgan Freeman, and Kevin Kline—might not leave on the same note if they keel over and die, thus leaving Last Vegas as their final mark on the movies. Last Vegas is by no means a terrible film, nor is it the low point in any of the careers of these actors, but it’s hard to appreciate the novelty of seeing these veterans share the screen in such a derivative picture when Redford eclipses them with a one-man feat. Why assemble so many great actors for a project that feels so utterly disposable?

Last Vegas is awfully flimsy for a film that boasts a cast of five Academy Award winning actors. (The film co-stars Oscar-winner Mary Steenburgen in a fine supporting role.) The laughs are funny in an embarrassing this-project-is-completely-beneath-you kind of way as the four leading men have a grand affair of geriatric jokes and good old-fashioned male bonding. Last Vegas is The Hangover meets RED as the four friends jet to Las Vegas for a bachelor party to let Billy (Douglas) enjoy his last weekend of freedom before he marries a girl less than half his age.

Billy gets the idea to live life to the fullest while delivering a eulogy at the funeral for one of his peers. Speaking from the altar beside the corpse of his departed friend, Billy impulsively decides to pop the question to his young squeeze sitting in the pews with the cranky blue hairs. She says yes, which prompts the lifelong bachelor to contact his buddies for a senior-special gong show. Billy, Paddy (De Niro), Archie (Freeman), and Sam (Kline) have been friends for over fifty years, and the trip to Vegas lets them reclaim the spirit of their youth in what could easily be their last soiree together.

The laughs come fast and cheap by pitting the distinguished actors in silly scenarios in which the old guys are antagonized by youthful counterparts. Las Vegas is hardly the Best Exotic Marigold Hotel where old folks and kind youngsters may live side by side. Sin City is a place for living in the moment, which is exactly what Billy wants the friends to do, but the sight of four wrinkled old-timers adds an unwanted whiff of mortality to Glitter Gulch.

Each of the four friends has a different wager for himself to beat on the weekend. Billy, of course, wants one last hurrah as the charming ladies’ man of the group. Archie needs to escape the twenty-four hour babysitting of his son. Sam, as bored of marriage as he is of retirement in Florida, receives advice from his wife (Joanna Gleason), accompanied with a blue pill and a condom, that “what happens in Vegas stays in Vegas.” Paddy, finally, wants to settle old grudges with Billy that he’s been holding on to ever since his wife—and the group’s female friend—died the year before. The swinging seniors of Last Vegas show that friendship, like growing old, is a bit of a gamble.

Last Vegas throws in a new ladyfriend to bring the ghosts of the friends’ youth full circle. Diana, played by Steenburgen, is a divorcée who fled her dull life as an accountant and came to Vegas to fulfill her love for singing. A love interest for Billy and Paddy both, Diana is the new Sophie for the group. Last Vegas, endearingly on the nose, uses the attractive lounge singer as a chip with which the two friends must wager their friendship of fifty years.

Last Vegas surprisingly folds when the script by Dan Fogelman (Crazy, Stupid, Love.) tries to bet big. The thin material stretches a bit too much over 104 minutes of high-key lighting, and Last Vegas feels forced as each of the friends confronts his mortality and re-evaluates the things that give joy and meaning to his life. Each of the four subplots unfolds like clockwork as the friends have their late-blooming revelations just before the party goes into a full-tilt PG-13 boogie. The film scores decent laughs by letting the actors play dirty old men as they judge a bikini competition or mix vodka Red Bulls with their back medication, but the material never rises above sitcommy slightness. The best of the jokes in Last Vegas have all been done before, and the film probably was a lot more fun to make than it is to watch.

The four actors are a fun bunch of old rascals—Freeman especially is a hoot—so it’s a shame that the film didn’t give them more to work with in this epic get-together of acting titans. By comparison, one need only look to, say, The Best Exotic Marigold Hotel, Quartet, and Hope Springs (or even The Bucket List) for family-friendly entertainment that gives seasoned actors roles that are both age-appropriate and tailored to the skills they’ve been building throughout their significant careers. The crowd-pleasing patness of Last Vegas is a reaffirmation that sugary entertainment can be a good night at the movies with the family, but it’s so slight and insubstantial that even a quintet of Oscar-winning veterans can’t make this a safe bet for money well spent.