Indigo is the Wooziest Colour 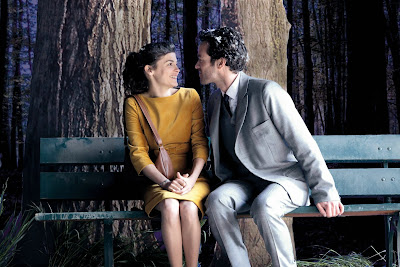 If blue is the warmest colour, then what mood is indigo? Indigo might be the wooziest colour thanks to the motion-sickness mania of Michel Gondry’s Mood Indigo. Mood Indigo, Gondry’s adaptation of the novel L’écume des jours (Froth on the Daydream) by Boris Vian, is auteurism run amok. Gondry’s visual flair gets the better of Mood Indigo as his quirky eccentricities become repulsively annoying as the film progresses. Mood Indigo looks as if Jean-Pierre Jeunet smoked some cracked-out hallucinogenic drugs and devoured Tim Burton during a serious case of the munchies. The overdose of zany surrealism is sickening.


The screwy world of Mood Indigo intoxicates for the first half-hour of the film or so as it introduces the audience to the imaginarium of its trust fund baby-cum inventor Colin, played by Romain Duris (The Beat that My Heart Skipped). Duris plays the Parisian man-child with a charming innocence and naiveté. Colin looks at the world like a child entrance by dazzling lights and shiny new things. The world is his playground.

Colin can afford not to work for a living, so he spends his days in a loony Baz Luhrmanny apartment making strange toys with which to amuse himself and his friend/fellow dilettante Chick (Gad Elmaleh, Midnight in Paris). The boys spend their days playing with inventions like the pianocktail, a device that mixes drinks according to the keystrokes of a piano, and musing about Chick’s passion, philosopher Jean-Sol Partre. Waiting on them hand and foot is a smiling six-foot servant named Nicholas (a likable Omar Sy from The Intouchables) who cooks like Mary Poppins and speaks like Shakespeare, although the Colin and Chick would much prefer he talk street while he serves them cake. A man in a mouse costume (Sacha Bourdos) also occupies Colin’s flat, if the abode isn’t weird enough.

Colin’s fantasyland is a novelty as Gondry makes life as but a dream. Gone from Mood Indigo are the toils of the real world: work, money, and consequences. Everything is merry sunshine for the quirky Colin as he makes self-serving toys that crawl around the flat like something out of Naked Lunch and add some colourful whirligigs to offer the diversionary escapism one enjoys at the movies.

Fun and games don’t last for long, though, as Mood Indigo eventually fades into the dull realities of life. When Colin meets Chloé, played by Audrey Tautou (Thérèse Desqueyroux), he finds an escape that doesn’t have a happy ending. Tautou is adorably bubbly as she plays the antithesis of Amélie in a most Amélie-like world. Colin’s courtship of the down-to-earth Chloé brings him out into the streets of Paris and puts him in a world where things cost money, people make mistakes, and actions have consequences. Their fairy tale romance takes an unusual turn when Chloé develops a water lily in her lung and the only treatment is to surround her with flowers. It’s a costly remedy, so Colin must work for a living for the first time in his life.

Colin’s encounter with the real world is still as idiosyncratic a world one expects to see in a Gondry film. People still walk with bent legs, doctors still observe patients made out of felt and tissue, and Chick’s girlfriend Alise (Aïssa Maïga, Paris, je t'aime) goes on a cartoonish killing spree to spite Jean-Sol Partre. One’s enthusiasm for Gondry’s madcap formalism can’t carry Mood Indigo through its wacky descent into further madness, though, for one tires of the breathless antics as if one has the attention span of the child.

Mood Indigo makes a fine point over the disappointment Colin faces when he is pulled out of the rabbit hole of his fantasyland by slowly desaturating the vibrant colours of Gondry’s palette as Chloé’s prognosis becomes more dire; however, the point that fantasy is more fun than reality could have easy sufficed if Mood Indigo were a short film. Similarly, the film occasionally has a spot of fun by commenting on the adaptation process as characters reflect upon where they might be in the novel. (“This is where they take two pills,” notes Chick as he and Colin drop some drugs around Chapter 3.) A self-reflexive race to the aisle is equally amusing as Gondry designs some elaborate set pieces to further the fiction to which the minds of his characters seem wholly confined. The effort that goes into the visual scheme of Mood Indigo is laudable—the effects, animation, and frenetic editing are remain undeniably impressive even when they become assaultive—but there simply isn’t enough substance to carry the surrealism through all 131 minutes of the film. Many of the supporting players are also all over the map and suffocate the film in its own manic pace. Duris and Tautou, however, are a fine onscreen pair, and the first bit of Indigo will put audiences in the mood for love, although the bliss of the first act makes the gradual collapse of the film doubly disappointing.

One wants to embrace the gonzo originality of Mood Indigo, for Gondry’s style is madcap genius when it works (see: Eternal Sunshine of the Spotless Mind). In this case, however, it’s self-indulgent overkill. There’s little to latch onto for one to make any bother of playing with all the doo-dads that clog the screen. Mood Indigo is weird for the sake of being weird, and art for the sake of being art. Seeing Gondry have carte blanche to amplify his dizzying style up the wazoo is an acquired taste, and Mood Indigo seems bound to polarize even the director’s most loyal fans. Its incessant peculiarity culminates in one of the most agitating film experiences of Gondry unique oeuvre. But it’s still a better Gondry film than The Green Hornet.

Mood Indigo screens in Ottawa at The ByTowne until Tuesday, Oct. 29.