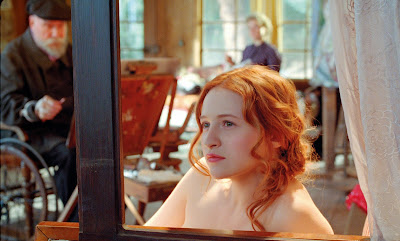 They say that beauty is all in the eye of the beholder. It’s a tricky assessment. Prone to subjective guidelines and convenient rationalizations, declaring something beautiful inevitable shapes how another onlooker might assess it in in turn.


The same adage could go for the Academy’s kooky process for selecting contenders in the category of Best Foreign Language Film. Each nation is faced with the difficult task of declaring which one film from their country’s output might seem the most beautiful to American voters. It’s a tricky and inevitably flawed process. Just look at Renoir, France’s surprising (if not bizarre) selection to represent the country in the 2013 Oscar race. Renoir isn’t a bad film by any means, but it is comparatively less beautiful than are some of the films France could have sent instead. (It’s no In the House or, from the sound of it, Blue is the Warmest Colour, which might simply have to wait until next year due to restrictive release dates.) Renoir nevertheless provides a fleeting sense of beauty, so one can see what makes it an appealing choice to the film gurus of France.

Gilles Bourdos’ Renoir is a lot like a beautiful painting. Saying a film is like a painting is, admittedly, a backhanded compliment if there ever was one. Renoir is a beautiful feat of composition, but it’s a flat canvas without much life to it.

The lighting and cinematography of Renoir is stunningly gorgeous. A savvy art dealer could easily take a hi-res screenshot of virtually any frame of the film, mount it on a matte, and hang it in a gallery. The colours of Renoir have a painterly grasp for colour, texture, and hue. Bourdos and cinematographer Mark Ping Bing Lee display a masterful hand at capturing subjects in artful baths of natural light. Renoir would be proud.

A film needs a lot more than eye-catching compositions, though, to bring a film to life. Renoir is a safe and respectful snapshot of its subject’s engagement with his art, but the film doesn’t really have much of a point. Renoir misfires into the My Week with Marilyn territory of missed opportunities as an intriguing subject becomes muddled—and reduced—to a fleeting love affair.

The film chronicles the relationship between Pierre-August Renoir, played by a serviceable Michel Bouquet, and his model Andrée, played by an attractive Christa Theret, as they work together on a series of nudes in the romantically picturesque Côte d’Azur. Renoir and Andrée muse a little about art and life as the painter renders his model’s ample breasts with fine strokes of his brush. A little—and only a little—of Renoir’s philosophy arises as he creates some of his masterful paintings. One stirring debate sees the painter argue with his subject that the only true work one can create must be done with the hands. Andrée, an actress, counters that art exists in the ephemeral, intangible moment in which a work or performance connects with a viewer. It’s all in the eye of the beholder, Andrée might say as Renoir uses her as a muse for lushly and ethereal, yet physical art.

It’s in moments like this that Renoir has the workings for a masterpiece. There’s a good debate about the foundations of art between creator, subject, and spectator, and it’s all dramatized in an aesthetic nod to Renoir’s great work. Little else lives up to this fleeting moment, however, save for a few scenes of Renoir painting amongst nature, which grow tiresome rather quickly.

Good art becomes little more than a backdrop for a little love story, though, as Renoir takes Andrée from being the muse of Renoir and makes her the object of affection for another. Andrée piques the interest of Renoir’s son, Jean (Vincent Rottiers), who grew up to become the acclaimed director of films such as The Rules of the Game. Film buffs eager to learn about Jean Renoir’s period of blossoming love and inspiration with Andrée, who became his eventual wife and onscreen muse under the name Catherine Hessling, might be disappointed. Renoir offers less insight into the son than it does into the father. They’re both consumed with passion for the girl with the great breasts, but the tension offers little more than a slight Oedipal complex as the final muse of one artist becomes the first of another.

Perhaps the real problem with Renoir—other than its wildly unfocused plot—is that it does little with its central muse besides asking her to strip and pose in heavenly light. Renoir rarely depicts Andrée as more than an objet d’art. The only time she gets to voice her own wants and desires, Andrée comes off as a hysterical, plate-smashing ninny. Renoir ultimately leaves the audience with a story about an objectified woman, a dirty old man, and a jealous son. Film buffs and art aficionados in search of a great tale about our relation with art might best rent Olivier Assayas’s Summer Hours, which also boasts some magnificent painterly composition with natural light. (The Renoirs might prefer that film, especially on Criterion.)

Renoir looks like a work of art, but it’s fairly artless. As a flat and dramatic, if sumptuously conveyed, film, Renoir leaves it up to the viewer to discern the beauty. Watching the film is like observing a canvas in a museum and mulling over the impressionistic colours. One doesn’t need to stare at a painting for one-hundred and eleven minutes, though, to find its beauty. Renoir, on the other hand, leaves one digging for beauty after its nearly two-hour running time is over. Renoir pays tribute to two great artists with a work that’s only art-ish.