You Have Been Bad 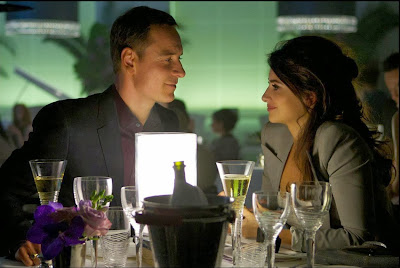 Cormac McCarthy and Ridley Scott drop a collective Lincoln log with The Counselor. An insufferably talky and speech-laden movie, The Counselor mirrors last year’s dialogue-heavy Lincoln in that it might be better suited for the stage. The shocking thing about The Counselor, unlike the finely scripted Lincoln, is that the chatty writing, frankly, stinks.


The Counselor ranks as one of the year’s biggest cinematic disappointments thanks to the screenplay by Cormac McCarthy, which sounds like it was dead on arrival. McCarthy is arguably the best novelist working today—heck, one could go as far as to call his 2006 Pulitzer Prize winner The Road a contender for the title of The Great American Novel. (It at least gives The Sound and the Fury and The Sun Also Rises a decent run for the money.) What works for prose doesn’t work for the screen, unfortunately, as The Counselor, McCarthy’s first original screenplay, is shockingly grandiose, pretentious and, most surprisingly, dull. Those are three adjectives one would never expect to use while describing McCarthy’s work.

The slow script is bad news bears for director Ridley Scott, who might make a double whammy with back-to-back gongs for the title of “Most Disappointing Film of the Year” after 2012’s Prometheus suffocated on its own hype. Prometheus was still a decent film regardless of one’s expectations, but The Counselor is just a dud. Scott does nothing to bring this shot/reverse shot pic to life as an ensemble of heavyweight actors delivers McCarthy’s prosaic and über-literary prose. That might work well when one attends a live read, or if Michael Fassbender, Penélope Cruz, Cameron Diaz et al banded forces for an audio recording of one of McCarthy’s masterful books; however, it’s just plain boring on film. The Counselor is like watching a bunch of stars read a novel aloud.

The Counselor stars Michael Fassbender stars in the title role. Literally. The counselor is a man with no name. He’s the one good, albeit greedy, man in the moral vacuum of the lawless bordertown in which he resides. His fiancée, Laura (Penélope Cruz, in a surprisingly underwritten role for such an overwritten film), is practically a nun compared to the black and white baddies of the surrounding sin bin. It’s disappointing to see Cruz get so little to do in The Counselor since it was McCarthy’s words that helped bring attention to her with Billy Bob Thornton’s 2000 adaptation of All the Pretty Horses.

Another member of the McCarthy adaptation alumni, Javier Bardem (coincidentally Cruz’s husband), also doesn’t fair as well as he did before with the author’s words. Bardem, as seems to be a contractual obligation whilst playing the villain, sports another crazy ’do. Reiner’s electro-shocked gel sculpture of hair isn’t nearly as bad as the Pageboy/Anton Chigurh Haircut Bardem sported in the adaptation of McCarthy’s No Country for Old Men. Bardem’s Reiner, a cartel drug lord and client of the counselor, is just a bit too much of a diva to be a decent baddie. It’s a near miss for Bardem after playing the foe in Skyfall and No Country for Old Men with such chilling relish. 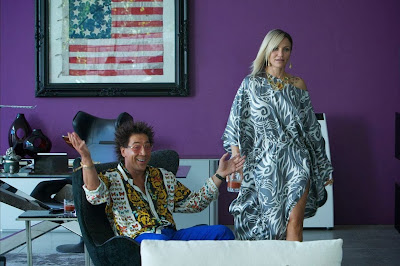 The biggest baddie, though, is a blonde bombshell named Malkina. Malkina, played by Cameron Diaz, is a rojo caliente moll who slinks at Reiner’s side in a wardrobe of snazzy glam rock haute couture. (She looks stylish, but who wears stilettos in the desert?) Diaz, now over forty, still has enormous sex appeal as this feisty cartel cougar. Malkina complements her stylish threads with gaudy pimp bling and a pair of domestic cheetahs. The sight of the cats running through the desert, chasing after a rabbit and going in for a kill while Malkina sips a cosmopolitan, provides one of The Counselor’s few moments of unspoken power. (But it later drops a line about the sex appeal of the kitties for viewers who don’t catch on that the cheetahs have a symbolic interplay with Malkina.) The cats look slightly ridiculous as they sit with Malkina by the pool, but she blends in well thanks to the cheetah spots tattooed on her back. The Counselor isn’t exactly subtle that it wants viewers to note Malkina as a silent, beguiling killer.

Diaz works overtime in The Counselor and she performs what is sure to be the talking point of the film’s meandering self-indulgence. Following a trip to confession (prompted by Laura, naturally), The Counselor reveals one of Malkina’s most outrageous sins. She has sex with Reiner’s car.

The Counselor loses its final shred of credibility as Diaz and her body double spread their legs and gyrate back and forth on the windshield for Reiner’s pleasure. True to form with The Counselor, Reiner relates the entire episode in a monologue to the counselor. He likens the sex act to a catfish trawling the glass of a fish tank. This speech is one case where one wishes that The Counselor stuck to its penchant for telling, rather than showing, as the scene cuts back and forth between Reiner’s recollection and Malkina’s performance. The scene is extra sleazy, if not inadvertently funny, thanks to the squeaky noise of Cameron’s lady parts rubbing back and forth on the windshield. It sounds like wiper blades scraping along dry glass, which doesn’t suggest that Malkina enjoys the trick any more than we do. One hopes the sound effects are post-production.

In fairness to Diaz, even the nimblest of porn stars could not make this ridiculous bit of Cirque du Soleil sexytime work. There’s not an ounce of novelty in this scene, which Reiner describes as a hallucinatory nightmare, and it kills any chance of making The Counselor (another) comeback for Diaz. Unlike, say, Nicole Kidman, who took a wiz onscreen in last year’s The Paperboy, Diaz’s smoldering screen presence in The Counselor just doesn’t provide that hot, sweaty, pulpy entertainment that deserves a spanking and a round of applause. The Counselor is so pulpy it makes The Paperboy look like Shakespeare. At least The Paperboy knew it was trash.

The Counselor, on the other hand, is less likely to meet charges for excessive force than it is for public indecency. Violence in a McCarthy work always has a point to it and The Counselor is no exception: the drug trade is nasty, gruesome business. Scott, on the other hand, loves violence so much that he could make a paper cut look like a knife to the jugular. The violence in The Counselor is sparse, but it’s a grisly mess when it does splatter the screen. It’s all a question of right and wrong, or good and bad, as the counselor finds himself at the centre of a body count that piles up with the speed of heavy artillery.

“Have you been bad?” Laura asks the counselor in an early scene of the film. The counselor has been bad, but, like the film that shares his name, he remains blissfully ignorant of his own vices. The questions of goodness and badness—plus meanness, a true McCarthy trait—arise most overtly during the counselor’s indecipherable conversations with a colleague named Westray (Brad Pitt). The Counselor reveals little about the motivation of its characters in spite of the excess of verbiage that arises as folks like Westray chat indirectly with the counselor and discuss their wicked deeds in a roundabout way. The film wants the audience to ponder the gray cloud around the antihero, rather than judge his actions overtly in binary questions of right and wrong. There’s not much time to think, though, as The Counselor rarely pauses for a breath.

One of the film’s most notable monologues, if only because it’s so offensively on the nose, comes in a final act sermon delivered by Rubén Blades as a cartel colleague who tells the counselor that the man most prone to reflection is most removed from reality. The Counselor doesn’t heed its own advice, as it forgets the reality that the film experience is a two-way communication: passive viewing doesn’t make for enlightened viewing as a film tells the audience all it needs to know to fit the pieces together. A strong finishing act can’t redeem the slow chatter of The Counselor’s meandering beginning, though, for the film simply doesn’t offer any incentive to put it all together. The Counselor’s circular approach to its deeper questions backfires into a pointless mess as the film talks at its audience, rather than engages with them. To answer Laura's question: The Counselor is bad.

The Counselor is now playing in wide release.