Capsule Reviews: 'The Croods', 'Drinking Buddies', Revisiting 'To the Wonder'

More adventures with the screener pile: 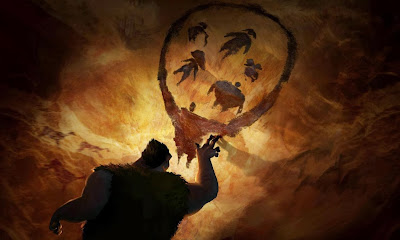 How the visual arts have improved since the days of the Neanderthal! The animated feature The Croods gives audiences young and old (but mostly the young’uns) a sense of the full scope of animated storytelling with this harmless romp through the Stone Age. Emma Stone stars as a sprightly cave kid named Eep, who has a mop of hair unrulier than Skeeter Phelan’s, and crazy Nic Cage plays her cave daddy, whose idea of bedtime storytelling is to make cautionary tales on the cave walls. “New things are bad,” advises dad as he tells Eep and the family to stay in the cave and be afraid of the dark.

The story is pretty much a run-of-the-mill kids’ story in which a wild child tames the wilder beast of her father. The Croods is predictable, corny, and frequently juvenile, but it’s nice to see a film cater strictly to kids and avoid the usual jokes geared at the parents, which usually land with a thud because they’re outdated pop culture references by the time the film is released. There’s nothing especially profound about The Croods, but it is enjoyable escapism buoyed by spirited vocal performances, especially Cloris Leachman as the cave granny, and a magical score by Alan Silvestri. On the other hand, parents might be taken aback with how quickly the strong-willed Eep becomes a bubbly airhead in the presence of the animated hunk played by Ryan Reynolds. The Croods seems like a step back for gender representation after last year’s red-haired warrior Merida in Brave. 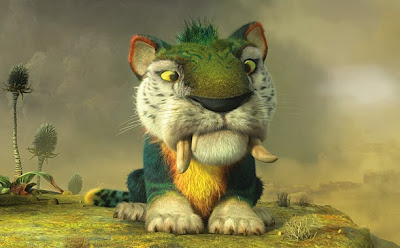 Bigger points go to the film’s imaginative flair for conjuring animals that play around the Croods’ Stone Age jungle, most notably a rainbow sabre-toothed cat that performs bold rescue missions in the two standout scenes of the film. This adorable feline might be the best thing about the film. Cat people are sure to rejoice over the cuddly kitty, but that doesn’t bode well for The Croods.

The script of The Croods might seem offensively on the nose even to a four-year-old, but directors Kirk De Micco and Chris Sanders take visual storytelling to its peak with film’s outstanding animation. The visual design of The Croods excels just as much as its script might be lacking. This could seem like a five-star movie if watched with the volume off, although that might do a disservice to the actors and the composer. There is so much to marvel at as The Croods features stunning dust clouds, fire, and sunlight that looks as close to life as the animated arts can probably get. (The billowing smoke and clouds, however, add an awkward shade of 9/11 imagery to the apocalyptic climax.) The texture and minute detail of each frame is truly outstanding and looks great even without 3D glasses. The Croods is a significant step in computer animation; the story itself, however, might be just as crude as something a caveman would write.

The Croods is now available on home video.


***Note: The Croods was accompanied by a copy of 12 Years a Slave, which I hastily saw on the big screen when it opened here November 9th. (5 star eview here.) I look forward to watching it again!

Craft beer is taking pubs by storm. Bottles and mugs of tasteless swill are going down the drain in favour of hops and body. The same could be same of the movies, which are fighting back against artificial excess by being natural and complicated. Joe Swanberg, a player in the mumblecore movement of American independent cinema like screener pile alum Lynn Shelton, offers a story of truth and maturity that deserves a hearty toast. Drinking Buddies is a finely observed character study.

Drinking Buddies boasts a most impressive performance by Olivia Wilde, who is having a banner year with her strong turn in Paul Haggis’s Third Person, as Kate, who works at a microbrewery with her drinking buddy Luke (Jake Johnson). Kate tries to take their friendship to the next step during their nights of endless binge drinking enveloped in the faux-romantic filter of bubbly beer. There’s nothing especially groundbreaking about Drinking Buddies as the subtle humour of the film follows the predictable route of a mildly amusing sex comedy with indie charm. Swanberg has a way of capturing all the misinterpretations and mixed messages that result in messy relationships and awkward mishaps, so Drinking Buddies has a down to earth naturalness underpinning its lo-fi humour. It’s believable and honest. Like a cold glass of suds, a romantic comedy goes down much better without all the artificial flavour (and empty calories) of the mass-produced stuff. Cheers!

Drinking Buddies screens in Ottawa at The Mayfair Dec. 13-15.


The recent screener adventures also included a revisit of Terrence Malick’s To the Wonder and I’m disappointed to say that my opinion remains mostly the same as it was at TIFF 2012. (Original review here.) To the Wonder is minor Malick, which is still a step above the stuff most other filmmakers make, but its metaphor of love and loss isn’t as profound as the director’s previous films. There’s lots of twirling accompanied by random voiceover. (“What is this love that loves us?”) Cinematography and score are ace storytellers, but I remain firm in my criticism that the gravest flaw of To the Wonder is that, unlike Brad Pitt and Jessica Chastain, Ben Affleck and Olga Kurylenko can’t carry a film with their eyes. To the Wonder is nevertheless a beautiful lesser work, so fingers are crossed that Knight of Cups is a return to form for film’s great philosopher.


To the Wonder is now available on home video.