Contest: Win Tickets to 'Blue is the Warmest Color' 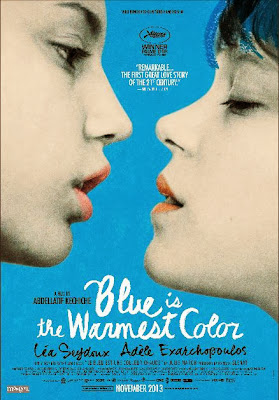 On the heels of yesterday’s launch for the 28th European Union Film Festival, the Embassy of France provided a tip that another hot film from the EU—possibly the biggest European hit this year—is also coming to Ottawa. Blue is the Warmest Color (La vie d’Adèle: chapitres 1 & 2), which won the Palme d’Or at this year’s Cannes Film Festival, screens in Ottawa at The ByTowne November 15-24. Blue is the Warmest Color is directed by Abdellatif Kechiche and stars Adèle Exarchopoulos and Léa Seydoux. I reviewed the film when it screened at the Inside/Out Film Festival last month and gave it four stars and especially high praise for the performances from its two actresses.

To celebrate the release of Blue is the Warmest Color, the Embassy of France in Canada, in partnership with Mongrel Media and the ByTowne Cinema, is giving away ten (10) double passes to the opening night screening at The ByTowne, Friday November 15th at 8.45pm.

To enter your name into the draw, answer the following question and send your name and email address to ambapresse[at]gmail.com:

France is the world’s leading tourist destination, with 83 million foreign tourists visiting each year. Which country do most of these tourists come from? The United Kingdom, Germany, or China? (Hint: The answer is on the Embassy of France website).

Winners will be contacted by mail on Monday, November 11th, 2013.

Thank you, and good luck!

Synopsis: Adèle (Adèle Exarchopoulos) is a sensitive fifteen-year-old student. She is, essentially, an ordinary kid, until she realizes that her sexual desires turn more towards her own gender than the boys who ask her out. After meeting a blue-haired stranger, the confident and assertive Emma (Léa Seydoux), Adèle soon finds herself tentatively visiting gay bars, and, shortly thereafter, wrapped in the arms and legs of her new lover, enjoying the delights of first love.

Blue is the Warmest Color screens in Ottawa at The ByTowne Nov. 15-24.