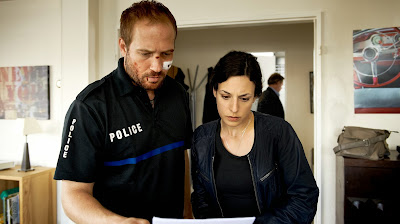 Luxembourg doesn’t make too many films. This seems fair, since it’s a country with a population of just over half a million people. That isn’t enough seats to sustain an industry, right? Well, one might think that the few Luxembourgish films to be produced might therefore be painfully low-budget independent works, but Blind Spot, the film selection by the wealthy European nation for this year’s European Union Film Festival, is a serviceable genre pic. Blind Spot has decent production value for such a rarity.


Blind Spot was also submitted by Luxembourg as its contender for Best Foreign Language Film at this year’s Academy Awards. While the film might satisfy viewers in search of a dark or gritty diversion, it probably shouldn’t set its sights on Oscar’s January shortlist. There’s nothing especially bad about Blind Spot, but this fast-paced potboiler is only really memorable for its Luxembourgish novelty.

Director/co-writer Wagner forgoes the expected route of using the infrequent cinematic offering to give audiences a postcard perfect of the landlocked European country and instead takes viewers into the dark side of Luxembourg as Detective Olivier Faber (Jules Werner) finds himself in a messy murder investigation. The victim is a cop, who was shot at point blank range in his car. The cop also happens to be Faber’s brother.

Faber’s investigation is assisted by his senior colleague Inspector Hastert (André Jung) who wants one last case before retirement. The elderly Inspector can move a case a break-neck speed as Blind Spot moves along quickly and swiftly. The initial stages introduce a web of shady characters and intriguing angles that shroud the case in ambiguity so that the viewer never gets a complete sense of the dimensions of every angle. Blind Spot offers some mysterious misdirection and exciting action as Faber finds himself in the thick of a dirty case. Wagner stages some impressive action sequences, especially one centrepiece scene that sets Faber and his partner (Brigitte Urhausen) in pursuit of a suspect through the busy market.

The Blind Spot is slick and stylish, but it doesn’t really reach its potential. The action results in a disappointingly anticlimactic build-up. Blind Spot is surprisingly predictable in spite of the ambiguity introduced in its opening act and the sense of disorientation afforded by its quick plot and choppy editing. It’s not hard to distinguish between a red herring and a baddie even though Blind Spot casts most of the cops and public figures in some shade of grey as Faber tries to bring his brother’s killer to justice. Everybody has a secret to hide in Blind Spot, even the trusty anti-hero played by Werner himself.

Faber feels a little guilty about the tragedy since he was holed a way in a car himself getting a blow job from a random guy he picked up in the bar at the time of the shooting. Fraternal bonds certainly give the film a dramatic weight, but Blind Spot immediately raises Faber’s closeted sexuality as dimension to make him flawed and fallible alongside all the colleagues and city officials he encounters while treading into the dark side of a broken system. It’s a bit problematic to see the “gay cop” as a black sheep, especially since Blind Spot seems to use Faber’s secret as a parallel to his brother’s involvement in the Luxembourg sex trade, as each brother reveals a side of sexual deviancy to the faithful wives the left behind. “What kind of family is this?” cries Faber’s ex in disgust.

One might be reminded of better crime dramas while watching Blind Side, but one will probably be reminded of worse films as well. Blind Spot, while flawed, shows that Luxembourg has a lot of potential as far as national cinema is concerned. This gritty actioner might legitimately be the best Luxembourgish crime drama viewers have seen. It’s also probably the only one.

Blind Spot screened in Ottawa at the European Union Film Festival.
It screens at Toronto’s EUFF on Nov. 26 at 8:30 pm.