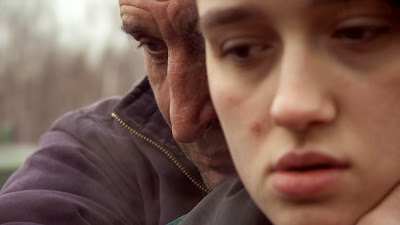 If Swedish censors seek to rate films on the Bechdel test, then Eat Sleep Die should pass with flying colours. Not only does the film star a headstrong protagonist who seeks agency and security over a blond boyfriend, but she also conveys a relevant tale about growing up in an age of shrinking opportunities by interacting with her fellow working class women. Eat Sleep Die, Sweden’s offering at this year’s European Union Film Festival, should easily strike a chord with viewers from younger generations. The film, which also happens to be Sweden’s official submission for Best Foreign Language Film at this year’s Academy Awards, is a timely story about a working class youth in today’s tricky economy. The toll of unemployment is just one factor that should let Eat Sleep Die play just as well on this side of the globe as it might in the EU. This feature debut by Gabriela Pichler is a great choice for veterans of the EUFF and new cinephiles alike.


Eat Sleep Die is the story of a young labourer named Raša, played by Nermina Lukač, who works at a Swedish food factory to support herself and her father, played by Milan Dragišić. It comes as a major blow to Raša when she is among the employees to get the sack during a round of layoffs at the food factory. It doesn’t seem right that Raša is put out, since she is easily the fastest worker among those packing lettuce into plastic containers at the factory. She does more than double the volume of work than most of her colleagues who keep their jobs.

Unemployment can be demoralizing and emotionally exhausting, as anyone who has ever experienced it might know, so Raša is rightfully at a loss when she is let go. Eat Sleep Die offers a poignant, sobering look at the prospects for youth in today’s economy. The dire forecast for Raša is doubly compounded because she and her father are Muslim Balkan immigrants. She has no high school diploma and no additional family to support them. Currents of xenophobia ripple through the round of layoffs, at least in Raša’s eyes, so Eat Sleep Die undercuts the thread of optimism that movies often find in escape. Life will not be better elsewhere—although it’s probably better in Sweden than it was in the situation from which the family fled—and her only outlook is to migrate to a neighbouring town in hopes of menial labour while her father returns home for some transient job.

Eat Sleep Die feels like it has the pulse of the moment. Director Gabriela Pichler, making her feature debut as a director, draws on much of her own experiences as a factory worker in provincial Sweden born into a family of immigrants, captures the clash of contradictions a young personal faces while trying to find themself in a country that is rapidly changing. Pichler writes Raša as a flawed and defiant heroine--she’s a woman with the brusque anything-is-possible naïveté of youth. Eat Sleep Die tells of a generation of working class citizens for whom the pursuit of a dream is hardly an option. They’re lucky if the secure a job packing fresh salad for city dwellers to eat at lunch.

There’s an energy to Eat Sleep Die that could only come from an artist with a strong sense of the reality that serves as her fiction. Pichler captures the film with a flair of new wave minimalism that uses the portability and intimacy of handheld camera work to get up close and personal with its subjects. The involving, revitalizing cinematography echoes some of the arresting work that has put the austere realism of emergent European filmmakers at the forefront of world cinema. (Cristian Mungiu, for example.) Pichler also gets solid, honest performances from a cast of mostly non-professional actors and debut performers. Lukač gives an honest and natural performance as the spunky Raša.

Eat, Sleep, Die seems to take place a world apart from the sleek Sweden of Lisbeth Salander and IKEA furniture. The film both depicts and contributes to a country in midst of redefinition. There’s hope to be found in the story of Eat Sleep Die, though, as Pichler ends the film just as it begins: with a party. There’s something to celebrate in having the freedom to go anywhere and do anything with one’s life. Finding the means and opportunity is another matter. Embodied in the loving, but testy relationship between Raša and her father, this story of a girl who stands to lose the one constant in her life if she chooses to survive is a compelling film that speaks to the heart of a generation.

More coverage of the 2013 EUFF may be found here.