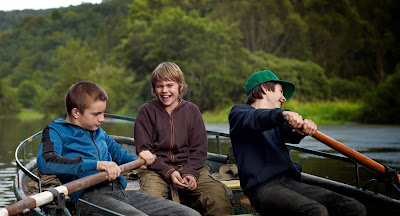 It’s been a refreshingly youthful year at the European Union Film Festival in 2013. Not only has the CFI’s programme offered a wide range of films both about and for audiences of all ages, but the selected films have also had a decidedly contemporary vibe, as their digital video style pulses with energy, electro-pop scores. It seems fitting, then, to wind down the festival with the old school 35mm charm of Belgium’s The Giants. All the coming-of-age tales at the festival improve upon a prototype to which this little film seems wholly indebted. The Giants, which tells of three lost boys finding their way by the river, adds a taste of Huckleberry Finn (or even The Little Rascals) to the closing days of the festival.


This film by Bouli Lanners, which topped the Directors’ Fortnight at Cannes 2011, is very much in the vein of Huckleberry Finn’s cinematic descendants such as Stand By Me or this year’s Mud. It’s a tale of boys will be boys, and of coming of age while traversing that ever muddy and symbolic river that flows through the land of misfit boys. The three lost boys of The Giants are brothers Seth and Zak, played by Martin Nissen and Zacharie Chasseriaud respectively, and their friend Danny, played by Paul Bartel.

Seth and Zak are home alone in their rural Belgian township as their parents abandon them to go work for an embassy in the city. Their absentee parents have left them without food or money, so Seth and Zak pillage the neighbours’ supplies like the kids from The Bling Ring and enjoy the odd lark with other people’s booze and clothes too.

Danny doesn’t have any better guidance or direction, since he’s under the care of his older brother. Danny’s hooligan elder is a big bad wolf with ties to the drug trade. He keeps angry dogs on a leash and stomps around, hitting things with a bat to scare off the three little kids.

Echoes of fables and fairy tales resonate throughout The Giants as Seth, Zak, and Danny find a kind of peace and escape in the deep woods surrounding their homes. Like the kids of a bedtime story, these three boys live in a world mostly void of responsible adults (save for one nice lady played by Marthe Keller), who might as well live in a gingerbread house. (The European homes certainly look accommodating for the likes of Hansel and Gretel.)

Lanners finds a lighthearted playfulness, though, with which to tell this sad story. The cinematography by Jean-Paul de Zaeytijd finds a faint elegiac tone in the pastoral landscape. The river itself assumes a life force thanks to the shots that crane along the water as the boys find their way. Ditto the folky song score by The Bony King of Nowhere, which adds a poignant note to the trio’s frisky story of thwarted adolescence. The songs especially lead The Giants to evoke comparison to Jeff Nichols’ Mud, as the film is driven by the lyrics much as the mellow songs by Ben Nichols elevated Mud.

Unlike Mud, though, there is no adult to steal the show. The Giants rests squarely on the shoulders of its three young leads and they carry the film admirably. Lanners lets his three talented young actors play in a world where make believe and fantasy don’t exist. Their game is survival. These actors seem to be having a blast playing the roles of the three wandering youths. They’re having fun, as kids should, but the power of The Giants comes through the subtly of their performances as their skills evolve and the kids they play grow into young men.

The Giants screens in Ottawa at the European Union Film Festival on Saturday, November 30th at 9:00 pm at Library and Archives Canada (395 Wellington St.)

It screens at Vancouver’s EUFF on December 5th at 8:20 pm.