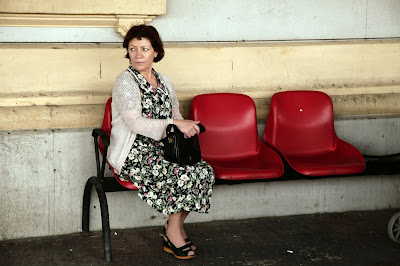 There’s a savagely funny shot at the end of Cristian Mungiu’s Beyond the Hills that flagrantly gives the audience the middle finger and tells them they’re not going to get any closure at the end of a difficult 150-minute drama. It’s the kind of subversively comic move that might leave an audience befuddled while one random guy in the crowd cries a token “Ha!” or begins a slow clap. For all the highfalutin artiness of the Mungiu pic, one has to note the director’s sense of humour.

Romanian cinema has, thanks primarily to the success of Mungiu’s 2007 breakout/Cannes winner 4 Months, 3 Weeks, and 2 Days, been dubbed one of the national cinemas to watch by art house cinephiles. Romanian New Wave has largely been an affair of powerful realism. It’s a no-holds barred affair of abortions and lesbian nuns. There’s little room for genuine laughter, although black humour is certainly part of the charm, as the parting shot of Beyond the Hills suggests.

It’s therefore a true novelty to see the programme for the European Union Film Festival offer a comedy to represent Romania at the festival. Stere Gulea’s I’m an Old Communist Hag, which easily boasts one of the best titles of the year, might not be a comedy in the gut-bursting guffaw sense, but it has a tone unlike anything from Romanian cinema that has found a North American release as of late. It has a playful light-heartedness beneath its sober palette of social realism.

Cinephiles keeping up on Romanian films might be especially surprised by the performance from the actress in the title role of the old Communist hag. Luminita Gheorghiu, who appeared in 4 Months and offers a searing performances as the calculated matriarch in Child’s Pose—this year’s Golden Bear winner at Berlin and Romania’s Oscar submission—gives an turn of surprising good humour, although the versatility of her skills shouldn’t come as much of a shock given the range she’s expressed before. Gheorghiu stars as Emilia, known to her friends as “Mica,” an old frumpy matron living on a shoestring budget in the squalid little apartment she shares with her husband.

Emilia was a card-carrying Communist before the revolution and she remains, much to her husband’s chagrin, a rare devotee of the cause. Her nostalgia for the days of Ceauşescu’s rule is triggered by two concurrent but unrelated events. The first is the return of her daughter, Alice (Ana Ularu), who is coming back to Romania from North America with her new Capitalist husband. Alice’s return sends Emilia into a bit of a frenzy as she readies the home for the return of her only daughter.

While preparing for Alice’s return, though, Emilia looks at the house in a different hue. She’s never really taken stock of their poverty until now. She and her husband obviously took a step down in life after the fall of Communism—note how a neighbour or two quips about her bourgeois past—and it’s the first time that she has never had enough to provide. Things weren’t perfect during Ceauşescu’s rule, Emilia admits, but she notes that there was always food on the table and more money for niceties than there is now.

Some of Emilia’s peers, however, note that her memories are just fiction. Perhaps Emilia’s romantic remembrance is caused by the other mitigating factor for communism. There is, for example, a movie currently undergoing production in the neighbourhood. It’s a historical picture called Life During Communism (and no, it’s not directed by Todd Solondz). Emilia becomes a consultant on the film when a relative remembers the one living, breathing Communist who might still have some of the party memorabilia. Emilia agrees, doing so more to honour the belief system she now holds valid than to earn the few bucks she needs. (But it’s all for the same common good, eh?)

Intercut throughout I’m an Old Communist Hag are interludes featuring a film-within-a-film as Emilia relives her life during the years of Romanian communism. These black and white scenes at first appear to be memories—in fact, the film begins with a vintage sequence in which Emilia rides the bus and recalls her youth.

Running parallel to the movie shoot and Alice’s return is an investigation into the exhumation of Ceauşescu’s corpse. Emilia and her family are glued to the television as they await news that the body that has been said to be the old Communist leader is verified. The forensic verdict provides closure in either direction, but the possibility of a return enables Emilia’s nostalgia. Gulea plays with the image and gradually reveals the vintage reels to be more than mere memories. Emilia eventually becomes an actor in her own story, honouring the efforts and laying to rest the old Communist philosophy to which she clings in hopes of finding a better life. As Emilia desires to return to the common middle ground of Communism and escape the economic collapse of Capitalism that is running her family into the ground, her role in the movie transitions into the present tense and Gulea gradually shows her to be playing make believe while trying to resurrect the old days.

I’m an Old Communist Hag distinctly plays with the magic of movies whereas most recent Romanian exports have avoided formal manipulation in favour of minimalism. The images of the film within a film code Emilia’s fondness for Communism as outdated: it’s an escape akin to film fantasy. In between these black and white sequences, though, are kitchen sink realizations of her modest living. One won’t find the signature long takes in this Romanian comedy—they’re imperceptible if they’re present—but the film still has an astute aesthetic side in spite of its lighter tone. Adding to the mood of Communist Hag is a sprightly musical score by Vasilé Sirli, which seems like a noticeable anomaly, for the Mungiu films don’t even credit composers.

The film leaves up to the viewer to decide if Emilia should put her memories to rest or favour the past that comes alive on the film set. Communist Hag, though, ultimately says that whatever one thinks of the past, Capitalism is not the answer for the present. Gulea puts Emilia in a series of humorous encounters with her friends as she begs for money and tries to put on a good appearance to let Alice know that all is well. A request to borrow money, though, is met with a sales pitch for silly trinkets. Likewise, a trip to the old state-run hairdresser’s, now a contemporary salon, leaves Luminita Gheorghiu with her hair cut to look like Lady Gaga. The sight is priceless.

Gheorghiu, Lady Gaga hair or not, is the main reason to see the film. Anyone who was fortunate enough to see her chilling performance in Child’s Pose this year will surely be taken aback by her sensitive, and amusing Communist matron. Gheorghiu gives a performance of subtle strength in I’m an Old Communist Hag, but she’s every bit as compelling as she is Child’s Pose. The dowdy Emilia is everything that the primped Cornelia is not. Gheorgiu’s turn as Emilia displays a warmth for finding common ground, while her Cornelia is a mesmerizingly ruthless player of winner-takes-all. Side by side, one couldn’t find a better range of social critique in the pair of performances by the great actress.

I’m an Old Communist Hag screens in Ottawa at the European Union Film Festival on Monday, November 25th at 7:00 pm.
It screens at Vancouver’s EUFF on Dec. 2 at 8:35 pm.