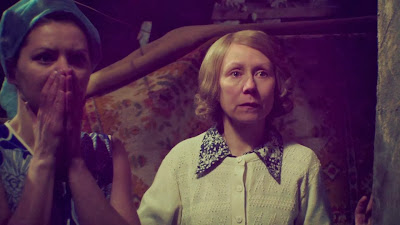 Director Hardi Volmer takes the concept of “national cinema” to a completely new level with the sweepingly cinematic epic Living Images. In the vein of The Artist or, better yet, Blancanieves, Living Images is a gorgeous throwback to classic cinema. This Estonian film chronicles the evolution of the moving image as an intricately intersected thread of Estonia’s own evolution as a nation. Living Images, which screens at the European Union Film Festival on Thursday, November 21, seems tailor-made for fans of rare and obscure films. It’s a meticulously made film about the way cinema captures and reflects our everyday lives.

At the heart of Living Images is a man who seems to be a dying breed in the film community. Julius (played by Aarne Üksküla) is an elderly projectionist who is cleaning up his old movie house upon learning that the young landlord plans to sell the building that houses Julius and Helmi (Ita Ever), the elderly tenant who lives upstairs. As Julius sorts through his old collection of film reels, he reminisces about all the memories created and projected in his small cinema.

Helmi’s granddaughter sits with Julius as he talks about the power of movies. Sitting before a poster for Terminator 2: Judgement Day, which was the last film the cinema screened before it went out of business, Julius conveys why the closure and destruction of the cinema is such a tragedy.

“What is life, then, but a movie?” asks Julius. “Somewhere you are edited,” he says, “some bits are okay, some are garbage. And in the end… in the end, nobody remembers a thing.”

Upon Julius’s word, though, the aged projectionist rewinds the reels of his memory bank and re-experiences the “living images” of his own life. Living Images dissolves with the noise and scratches that reveal the age of an old movie. (That crackling sense of the life of film will surely make viewers nostalgic for the days before movies became digital projections.) The film flashes back from colour digital cinema to the vintage black and white of silent cinema circa the days of 1905-15, as noted on the title cards of the film-within-the-film.

The opening spool of nostalgia is like a newsreel that might have preceded an early film screening. The film tells of a Baron who moved in to the flat above the cinema Julius now occupies. Watch closely in this introductory reel as the narrator explains the history of the characters acting out the home movie in the exaggerated pantomimes of silent cinema. These classic images may seem like pure novelty, but the details of each sequence ensure they're not. The film then cuts back to Julius as his young companion grows weary of the old movie (and the old man’s story) and she protests that she is “going to a real cinema now.” She’s seeing some piece of multiplex garbage called Mummy. This girl would rather watch a Hollywoodized take on history than learn about her own.

The affair with classic cinema continues, however, as Julius goes upstairs to sit with Helmi and chat, as old folks do, about the days gone by. Intercut within their stories are more classic film reels. As the flashbacks advance to the present, the meta-movies of Living Images progress with the advances in film technology. Sepia-toned cinematography evolves into the black-and-white of Golden Age of cinema—that pre-talky silvery sheen that made cinephiles swoon in The Artist. The picture evolves from talkies to Technicolora full colour specturm and from a squared aspect ratio frame to the evolving widescreen of cinema as the medium advances and adapts to compete with rivals like television. (All that is missing from Living Images is the cash grab of 3D.) Julius, Helmi, and other recurring characters are likewise played by a range of actors—upwards of five, in some cases—that have a degree of looks and acting styles as varying as the aesthetic of the film itself.

Embedded within the narrative of the reels Julius revisits in Living Images is an equally dense history of Estonia’s own storyline. The wages of the Second World War occupy the steely 1940s-set frames with a hint of Casablanca and a nod to Citizen Kane as Living Images stylishly tells of a war-torn romance in which a trio of lovers are moved by fate and by conflicting political allegiances. It’s a love triangle between Helmi, the young daughter of a Baron, and two men—her lover, Erik, and her quiet admirer, Julius. If Erik is the valiant Viktor Laszlo, then Julius, who works the projection booth even from its early days, offers a safe haven for the Estonians like Rick does with his Café Américain in Casablanca. Everybody needs a little escapism.

Viewers without knowledge of the full political backdrop of Estonia’s history might have trouble grasping some aspects of Living Images, but Volmer’s immersive realization of the country’s coming-into-being within the evolution of cinema is both stimulating and visually daring. If, however, viewers lose their hold on the political dimensions of Living Images, the love triangle that develops in tangent with the nation itself should give them a sense of the country’s progress. The images of the film likewise become warmer and brighter as hope and optimism colour the picture. The colour comes slowly, though, for the first sequence with a full palette is a murky interlude into the realm of the Cold War thriller as Julius and Helmi find themselves in a bit of espionage circa 1960.

Cinematographer Kristjan-Jaak Nuudi performs an outstanding feat of encapsulating the expansive history of film form as Living Images moves from one era of the medium to the next. It must be a cinematographer’s dream to go back to the origins of the art form and pay tribute to the innovators who paved the way. It’s just as much a thrill to watch. Volmer shows an equally ambitious scope in his approach to the visual variations of the film sequences. Offering a firm handle for the expressionism of the silent period to a careful understanding for how delivery, timing, and pace changed with the advent of sound, Living Images displays a great appreciation for film history.

Especially exciting is how the film favours the present. Whereas the likes of The Artist and Blancanieves are great feats of nostalgia, Living Images looks back to the past, but only so that it may move forward. Perhaps it’s the current of nationalism that keeps Living Images marching ahead.

The film delicately cuts back and forth from the present-day narrative of Julius and Helmi to the various cinematic interludes. However, the film gradually blurs the line between art and life as the same actors playing the characters in one sequence fit the age of the characters in the other. The film begins and ends with the bright, cold digital image that's become the norm today. The oldies might look more inviting, but any look back is bound to feel romantic. At some point, the narrative of Living Images stops showing a movie and begins representing life. It’s hard to find the edit that Julius says separates one story for the other. There’s no true distinction between life and the movies for a true film buff, though, for the film tells of images that are stories of both the past and the present. They’re alive whenever they grace the screen.