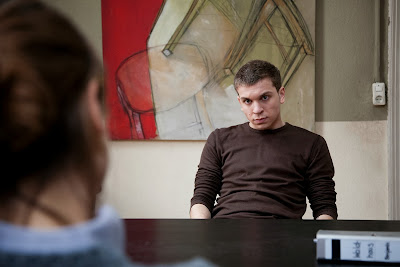 
Ben, played in an impressive performance by Edin Hasanovic (When We Leave), is the troubled youth in question. Ben’s in juvie for a string of hooliganism that includes a roster of vicious assaults. Shifting the Blame gives the audience a taste of Ben’s senseless violence by showing them a random carjacking that ends with Ben mugging the lone female driver, knocking her to the ground, and assaulting her with a few swift kicks to the belly. It’s nasty business, yet Ben is only in the slammer because his fellow carjacker snitched him out for other stuff. To him, kicking the woman to the curb was a victimless crime.

Ben, however, must confront the gravity of his actions when a social worker named Niklas (Marc Benjamin Puch) brings him to a rural retreat called Waldhaus where wayward boys like Ben can be straightened out. The Waldhaus is a much different facility than Short Term 12: it has no fences and no wall; it’s like a great big cottage. Ben seems to be on the mend until Niklas’s fellow social worker returns from a lengthy retreat. It’s Niklas’s wife, Eva (Julia Brendler), and, wouldn’t you know it, she’s the victim of Ben’s crime.

The screenplay by Anna Maria Prassler devises an intriguing scenario: make the aggressor atone for his past crimes using his last victim as his guide for closure. (Ben was masked during the assault, so Eva doesn’t suspect a thing.) Alternatively, if and when Eva realizes that she is rehabilitating the young man who caused her significant trauma, she must confront her own preaching. The Waldhaus is a place of openness and forgiveness. Niklas and Eva create a non-judgemental atmosphere in which everyone at the retreat learns from the past rather than looks back in anger. 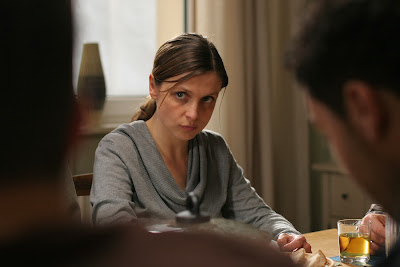 Shifting the Blame constructs a taut character study as Ben and Eva converge towards the inevitable confrontation of the secret. The film builds a double bind as the two equally compelling characters face separate questions. Ben elides responsibility for his aggression during early group therapy sessions by shifting the blame for his actions onto others, but can he do so while facing one of his victims? Can Eva forgive as easily as she expects others to?

This intimate film, tightly lensed by Jan Prahl and cut without an ounce of fat by Julia Böhm, offers a sold production that accentuates the film’s greatest assets: its performances. Hasanovic and Brendler are equally strong and versatile in two very different roles. Ben, cocky and arrogant, could be a fatally unlikable character, but Hasanovic’s believable turn portrays a directionless youth who has channelled his abandonment into aggression. Nothing is said of Ben’s life before he enters prison: the film only lets the audience come to understand him through the stack of photographs he keeps under his pillow, which aren’t all family photos since they include mementos from his crimes, and through the actor’s gradual melting of Ben’s boisterous shield. Brendler gets the more outwardly emotional role as Eva relives the trauma of her attack each time she sits in the circle with the boys in her care. They’re two nicely contrasted performances: one is brash and stoic to hide his vulnerability, while the other builds a protective barrier to overcome her fear.

Shifting the Blame has a strong social conscious underpinning this complex character study. The film asks viewers what punishment, if any, will best set Ben right for the wrong he has done to Eva. The film doesn’t let anyone off the hook, especially the viewer, as this emotionally gripping story forces one to take an objective perspective of either party. It does no good to judge Ben, for that would simply allow him to backslide from the progress he makes at Waldhaus. (He shows a keen interest in both auto mechanics and Marianne, the young woman played by Natalia Rudziewicz who assists the social workers at the retreat. Eva, on the other hand, slips into the role of the aggressor with invisible ease. She at first assumes a moral high ground, but she then gets off on the same sense of power that fuelled Ben’s past wrongdoings, holding her relationship against him in search of closure, catharsis and, above all, justice. The ambiguously open-ended finale of Shifting the Blame invites an important discussion in order to find a conclusion for Ben and Eva’s story.

Shifting the Blame screens in Ottawa at the European Union FilmFestival on Thursday November 28th at 7:00 pm at Library and Archives Canada (395 Wellington St.)

It screens at Vancouver's EUFF on Wednesday, December 4th at 6:30 pm.


Shifting the Blame trailer by Flixgr