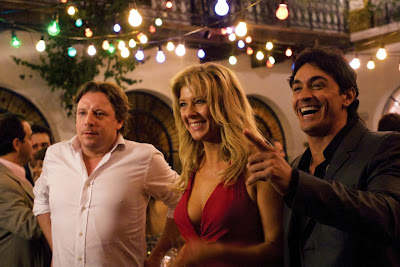 Divorce is usually such a dire affair, is it not? If the delightful Danish pic Superclásico has been called the “happiest movie about divorce,” as it was to some extent in the introduction to Friday’s jam-packed screening at the European Union Film Festival, then the title is well earned. Superclásico, Denmark’s Oscar entry for Best Foreign Language Film at the 2011 Academy Awards (it made the January shortlist), is an utterly buoyant film. Superclásico is one of the feel good movies of the year, or any year given how long it took to play here. All good things come to those who wait, for Superclásico induces a cheek-to-cheek grin. This film is the kind of experience that is bound to lift one’s spirits and brighten the day.


It’s especially revitalizing to see a romantic comedy as strong as Superclásico is, since lighter world cinema affairs that generally make their way to theatres across the pond are also slighter films. (E.g., I’m so Excited!) However, this film by Ole Christian Madsen, director of the outstanding 2008 thriller Flame and Citron doesn’t mix lightness with slightness. Superclásico, hindered only by its overlength, might be the warmest, breeziest film about divorce, but it conveys the pain of love and loss with a slice-of-life sensitivity.

The husband and wife at the end of their marriage, in this case, are Christian (Anders W. Berthelson) and Anna (Paprika Steen). Their relationship faded out when Anna grew tired of Christian’s homebody lifestyle and jumped ship to Buenos Aires where she became a soccer agent and fell in love with a star player named Juan (Sebastián Estevanez). Christian doesn’t accept Anna’s escape, though, so when Anna requests the divorce papers so that she and Juan may wed, Christian decides to fly to Argentina and deliver them to her himself. It’s a last ditch plea to save their marriage—and their family, as he drags their sixteen-year-old son Oscar (Jamie Morton) along for the trip.

The film is reminiscent of Woody Allen’s Vicky Cristina Barcelona with its picturesque tale of how a whiff of foreign air can intoxicate a traveller and make him or her do all sorts of crazy things. (The film’s amusing narration is equally likely to remind viewers of Allen’s trip to Spain.) Like a good Allen pic, though, Superclásico is a funny affair of flawed, neurotic people breaking out of their shells when prompted by the thrill of escapism and fantasy afforded by travel. It’s a humorous and dramatic adventure alike, as Superclásico demands its characters to be grounded even as they take find themselves in foreign land.

Christian, for one, puts himself into perspective when he strikes up a friendship with an Argentine vintner at a bar. The man, played by Miguel Dedovich, pours glass upon glass of the Malbec that Christian professes to abhor upon arriving in the country. “It’s too heavy,” he grumbles in search of lighter fare. (Christian is a wine-seller, although his business is in decline.) The vintner teaches Christian to expand his palate as the two reminisce about their failed marriages. Christian sees something of himself in the vintner as the elderly man shares his thoughts on wine and women: not wanting to become an old man drinking alone in a bar to forget the past, Christian is inspired to try a new approach to win Anna back.

Superclásico spills out into multiple storylines as the travellers part ways and, like Vicky and Cristina, pursue their own romantic endeavours. Christian might not be as successful with Anna, but new love is found in Argentina when Oscar sets his eye on the beautiful tour guide named Veronica (Dafne Schiling) while the family does a little sightseeing. (Naturally, mom and dad are bickering.) Oscar, ever clad in a big black leather coat despite the pulsing South American sun, is one of those young people that see life through a viewfinder: he is constantly taking aim and clicking away as his parents bicker and fail to note all the good things around them. He only puts his camera down for Veronica and, like Christian, only truly appreciates the trip to Buenos Aires when he experiences the town as himself, rather than as a tourist.

The trip to Buenos Aires is like an anti-honeymoon of sorts. Aside from the budding romance between Oscar and Veronica, the only aroma of new love emanates from Anna and her heartthrob replacement for Christian. Christian has only the dregs. (This plays out in a humorous subplot involving Anna’s freaky maid, played by Adriana Mascialino.)

“I want this to feel right,” Christian tells Anna when he surprises her upon arrival. Anna replies that divorce never feels right. It’s the end of a journey that was supposed to last forever.

Christian’s surprise visit has some effect on Anna, though, for she echoes the same sentiment when she finally assembles her ex and her new husband to finalize the divorce. “This doesn’t feel right,” she notes, but Christian throws her words back at her, saying that divorce never feels right.

Superclásico, however, manages to make the difficult scenario feel right. There’s an amicable brightness to the picture even though it tells a story of break-ups and disappointment. Love is both lost and found in the romantic Argentine setting, for Christian and Anna both experience some old rumblings of that old feeling, but their time together reignites much of the toxicity that eventually drove them apart.

The strong performances adroitly handle both the invigorating escapism of the fun sex farce and the film’s dramatic edge. Paprika Steen is especially good as Anna, acting in three languages—Danish, Spanish, and English—and playing it big when the film calls for laughs, but bringing the audience down to earth when the film sobers up. There’s something in the air when Superclásico plays that’s bound to have audiences feeling drunk. Whether it’s the warming effect of the warm sunlight, captured beautifully by Jørgen Johansson, or the relief of the film’s sexy rom com charm, Superclásico is a well worth the trip.

Superclásico has its Toronto EUFF screening is Nov. 25th at 6:30 pm.