EUFF Review: 'Weddings and Other Disasters' 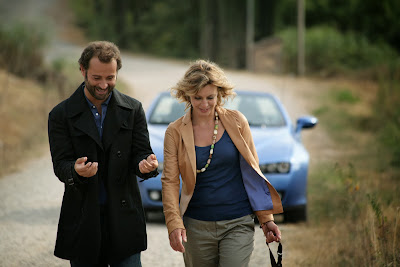 Ottawa cinephiles seem to be having a love affair with romantic comedies. Italy’s Weddings and Other Disasters played to the second sold-out show I’ve seen so far at the CFI’s European Union Film Festival. Weddings and Other Disasters might not be as strong a winner as Denmark’s Superclásico, which was the previous rom com to play to a full house, but this bubbly Italian affair shouldn’t divorce anyone from their love for happily-ever-after. This film by Nani Di Majo is a light-hearted jaunt through picturesque Tuscany.


After Diane Lane found love under the Tuscan sun and Julia Roberts had a fling with gelato during her world tour in Eat, Pray, Love, it’s nice to see a romance about a middle-aged single woman finding herself in Tuscany star a character who is actually from Tuscany herself. One can guess that this is probably rather common in Italian films, but they’re less frequent in North America. Weddings and Other Disasters is harmless fun as Nanà, played by a fun and bubbly Margherita Buy (We Have a Pope), gets roped into planning a wedding when her sister Beatrice (Francesca Inaudi) decides to go on a trip to LA despite her pending nuptials. Nothing’s been done so far: no bridal registry, no band, and no visit to the church. Nanà, a lifelong spinster, must therefore spend the next week in the chaotic role of a bride-to-be as she accompanies her future brother-in-law, Alessandro (Fabio Volo), and make all the decisions that can turn a fiancée into a Bridezilla. What could happen?

Nanà and Alessandro are a mismatched pair. He’s a serial flirt; she’s as undateable and Frances Ha, but she’s a decade older and attracts only boring men with bad breath. Alessandro thinks Nanà’s a stodgy prude and she thinks he’s an arrogant tease. But opposites attract.

No surprises there. Weddings and Other Disasters might be a tad predictable as Nanà and Alessandro hit it off the more they see each other. He’s the closest Nanà will ever get to her husband and a frank relief from the Swedish Lars Von Trier wannabe squatting on Nanà’s couch.

Nanà and Alessandro hit it off as the future in-laws make a playful game out of organizing the wedding. Mutual attraction arises naturally as the couple tosses about ideas of the love and commitment: a funny lark with the preparations at church turns into an intimate confessional. Nanà sees the appeal in her this brash man just as he professes his most intimate for her sister. Holy irony.

Buy is lots of fun as the amiable spinster who is hopelessly looking for Mr. Right in all the wrong places. (All the good ones seem to be married or make plans for the seminary.) She and Volo have natural chemistry that leaves viewers feeling lightheaded and a little drunk as Nanà and Alessandro tour around Tuscany, where romance always seems to be in the air. Marisa Berenson (I am Love) appears and gives Weddings and Other Disasters a bit of dramatic heft in its final act (hence: the disasters) in a small but memorable role as Nanà’s mother. The scene-stealer of the film, however, might be Nanà’s calico cat. The cat easily scores the best laugh of the film when Nanà, ever the spinsterly cat lady, rolls over in bed talking to what seems to be the score of a one-night stand and instead is greeted by her finicky cat. Kitty is clearly not amused by her owner’s singlehood.

We’ve seen divorce Italian style, so Di Majo gives the audience love with an Italian twist. Exaggerated hand talkers drink lots of wine, family drama runs loud and crazy, and funny mishaps dance circles around a senile old priest while incorrigible feelings blossom. A lot of wine is sloshed about and Nanà drops one unladylike vaffanculo! too many as the sexual tension mounts as she readies Alessandro and Beatrice for the altar.

Weddings and Other Disasters is amusing escape. There’s not a whole lot to it, so viewers in search of a deeply-layered serving of Italian lasagna best look elsewhere, but Di Majo and company make an good-natured evening of wine and tapas shared with friends. (Fortunately, wine and pizza were generously provided after the film by the Italian Embassy.) Weddings and Other Disasters is an effervescent little comedy: a fun, spirited rom-com with a fine Italian flavour.

Weddings and Other Disasters screened in Ottawa at the CFI’s European Union Film Festival on November 20th.
It screens at Vancouver’s EUFF on Nov. 30 at 8:25 pm.