A Most Un-Movie-Like Love Story 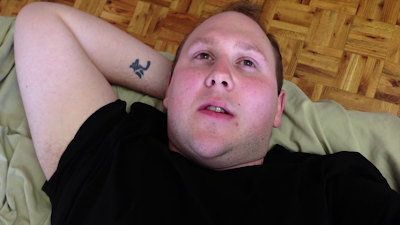 “Uh, I’ve been watching a lot of, uh, movies recently about break-ups and reconciliation and all that kind of stuff, and I just want to say… how… unreal those are,” says Sid (a docile James McDougall) as he records his thoughts on his camera phone. Sid, coping with the sloppy feelings of his break-up with Karri (Amelia Macisaac) has a most un-movie-like story of love and loss. Personal Space has realism and naturalism where most movies have escapism and fantasy. There’s no happily-ever-after in this low-fi anti-love story from Toronto filmmaker Elli Raynai, but the messy awkwardness of Personal Space seems more true to life than a romance that ends with roses and airport runways.

Personal Space looks back upon the disintegration of Sid and Karri’s relationship in a series of flashbacks after an opening scene sees a lonely Sid fingerfuck a pillow. Sid and Karri, when we first see them, are randy and passionate: they can’t wait to rip each other’s clothes off and do it on the floor the moment Karri walks in the door. (Personal Space also has a fondness for soft, puffy bodies that look more ordinary than the flawlessly sexy leads of most rom coms do.) The passion slowly fades from their relationship as Personal Space pits Sid and Karri in one frustrated, testy conversation after another. A sense of stasis sets in as Sid fails to respond to Karri’s needs. He’s fine sitting around the apartment doing nothing. He talks about how he wants to talk, but he’s often strapped for words when Karri agrees to listen to what he has to say.

Visibly influenced by American mumblecore and, in turn, the great spirit of maplecore that has been taking “cheap Canadian movies” to new levels lately, Personal Space is a proudly low-budget affair. Shot in the ballpark of a mere thousand dollars, Personal Space seems rooted in the realism of its modest origins. Like the kind, soft-spoken Sid, Personal Space doesn’t have a flair for Hollywood pizazz. Instead, Raynai and company evolve the story in an improvisational style, rather than follow a pre-drawn script. Collaboration, spontaneity, and using the tools at one's disposal are staples of mumblecore, and those proponents are what Personal Space does best. Personal Space feels authentically offbeat and honest.

It also feels awkward. The spontaneous conversations of the film have a roundabout way of expressing themselves. People talk about talking or the say what they’re trying to say without actually saying it. The have conversations about their lack of conversations and then sit in awkward silence à la Tilda Swinton and Isaach De Bankolé in Jim Jarmusch’s The Limits of Control. (Although parody isn’t the object here.) Lengthy pauses and halting gaps in idle chitchat are true to life, but a sense of malaise arises after a while when there is nothing left to say. Mumblecore bumbles when the lingering talkiness of Personal Space dawdles a little too much.

The conversations seem especially overdrawn in the many of the static long takes in which the film unfolds. Take one date, for example, between Sid and his prospective rebound squeeze, Julie (Stephanie Seaton, a highlight of the film), that plays out in mostlyone unbroken shot as the pair moves to the kitchen. They awkwardly make a few cups of David’s Tea (thankfully, they don’t wait for it to steep), then they talk a little, then they awkwardly start to slap each other, and then they drop to the floor for some lovemaking. The camera doesn’t move once in this scene, thus betraying both the modest circumstances of the production and the improvisational style. Master shots are fine, but they aren't especially interesting when they play out in full.

There are other moments, however, in which Personal Space takes its meager resources and delivers a something unique and refreshing. The most provocative moment of the film takes a handheld camera crawl into bed with Sid and Karri during some post-coital cuddling. Raynai finds room in the couple’s personal space for the viewer to get cozy and sense the intimacy between the two. It’s a feeling not captured again as the life slips away from their relationship.

Personal Space makes its fine observations for human nature through offbeat genuine interaction. There’s an air sincerity underlying all the gawky thorniness of the authentic relationships it depicts.

Personal Space screens in Toronto at the Carlton on November 21st.