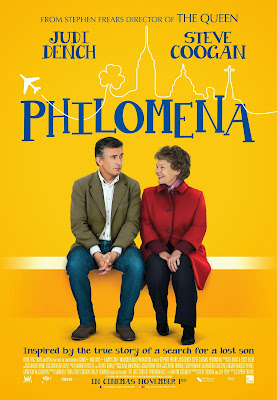 The Oscar race is on! Judi Dench, who might be the wild card of the Best Actress race, has been earning rave reviews from critics for her performance in Philomena. Dench stars alongside funnyman Steve Coogan (in an impressive dramatic turn) in this hilarious yet heartbreaking true story of a woman who enlists the help of a journalist to find the son she was forced to give away. This new film from director Stephen Frears (The Queen) had a banner run on the festival circuit, scoring a prize for Best Screenplay at Venice and the runner-up title for the People’s Choice Award at TIFF. Philomena hits theatres November 29th and is bound to be a talking point in the upcoming awards season.


Synopsis: Based on the 2009 investigative book by BBC correspondent Martin Sixsmith, The Lost Child of Philomena Lee, Philomena focuses on the efforts of Philomena Lee (Dench), mother to a boy conceived out of wedlock — something her Irish-Catholic community didn’t have the highest opinion of — and given away for adoption in the United States. In following church doctrine, she was forced to sign a contract that wouldn’t allow for any sort of inquiry into the son’s whereabouts. After starting a family years later in England and, for the most part, moving on with her life, Lee meets Sixsmith (Coogan), a BBC reporter with whom she decides to discover her long-lost son.

Thanks to our friends at eOne Films, Cinemablographer has passes to give away to the Ottawa sneak peek of Philomena. All you have to do to enter is answer the following question:

Philomena reunites Judi Dench with director Stephen Frears. On what 2005 film did the pair last work together?

a) Mrs. Brown
b) Mrs. Henderson Presents
c) Notes on a Scandal
d) The Queen

Send your answer to contests@cinemablographer.com with the subject “Philomena.”
Contest closes Sunday, November 24th at 11:00 am.
Screening takes place Monday, November 25th at the Coliseum (3090 Carling Ave.) at 7:30 pm.
Bonus entries go to anyone who shares this contest on Twitter and Facebook!

Philomena opens in Ottawa at The ByTowne November 29 from eOne Films.