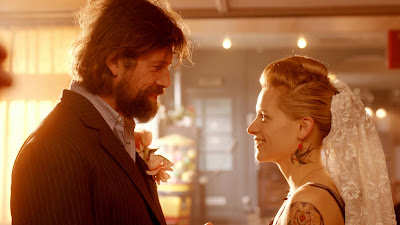 What is the most cinematic kind of music? Is it opera? Prone to theatrical histrionics, singing fat ladies, and stunt casting with Sara Brightman and Paris Hilton, opera hasn’t fared too well in the movies outside of the odd device in a Woody Allen film. Is classical music the best movie music? Perhaps, as timeless rivalries made Amadeus one the best films of all time, but that was almost thirty years ago. What about country? The twangy tunes of country and bluegrass are all about love and loss. They’re one of the purest forms of American storytelling, which bodes well for Hollywood. Just look at the legacy of country music that has been served in films such as Robert Altman’s 1975 epic Nashville or the 2000 George Clooney/Coen Brothers’ pic O Brother, Where Art Thou.

Hollywood does bluegrass just fine, but Belgium seems to do it even better. The Broken Circle Breakdown sings one of the sweetest songs you’ll hear at the movies this year. I usually abhor country music, but I absolutely loved every minute of The Broken Circle Breakdown. It’s like watching the guy and girl from Once make beautiful music in their early courtship and realize their love to its full potential, and then watching as their harmony changes tune and they become a toxic pair in the vein of George and Martha as their love crumbles in the cruelest possible way. This heartbreaking love story is easily one of the year’s best films.

Every song tells a story, but the ballads of this unique backstage musical show how context and feeling can radically shape the story a song tells. The Broken Circle Breakdown depicts the shattered romance of band mates Didier (Johan Heldenbergh, who co-wrote the play on which The Broken Circle Breakdown is based) and Elise (Veerle Baetens). The story, if played out in linear fashion, might seem like a sweet little love ballad about growing old and being together until the sun sets. It’s not so, given the fractured narrative and time structure of The Broken Circle Breakdown. Instead, The Broken Circle Breakdown presents both the highs and the lows of Didier and Elise’s tumultuous relationship in a beautifully intercut kaleidoscope of a film that turns the viewer’s heart into a knot with every delicate twist of the plot and every twang of soulful soundtrack.

The film begins with a scenario that is every parent’s worst nightmare. Didier and Elise are in the hospital as their five-year-old daughter Maybelle (Nell Cattrysse) is beginning chemotherapy for aggressive cancer. It’s devastating to imagine the pain of losing a child, yet The Broken Circle Breakdown spins a powerful look at the emotions turning Didier and Elise about as they recall the early days of their relationship through to Maybelle’s birth and the days preceding her stay at the hospital. The arc is layered in a powerfully intricate and dexterous feat of cross-cutting by editor Nico Leunen: The Broken Circle Breakdown takes viewers through the full circle of Didier and Elise’s relationship as both parents and lovers, but it does so in non-linear fashion and deftly flashes back and forth almost imperceptibly as the tenor of their relationship changes.

Guiding the plot-driven scenes of the film is a series of performances by The Broken Circle Bluegrass Band. The band, which is a product (and enabler) of Didier’s passionate enthusiasm for all things American, performs a number of familiar bluegrass tunes that are both sprightly and soulful. The songs, intriguingly enough, are all in English, although that probably shouldn’t come as a surprise given the American origins of the musical selections of the band. The songs at first appear as isolated performances: they’re devices to grant a sense of temporality to the story as Didier teaches Elise to love the genre of music as she teaches him to appreciate her mosaic of tattoos. Elise’s tattoos, like the songs, are personal emblems of love and loss. Each inky inscription on her body is both a story and a story retold as the names of lovers are redacted into new tattoos and her body becomes like contemporary art scar tissue. Elise’s tattoos offer a striking visual motif to complement the music.

Baetens gives a heartbreaking performance as Elise. Her poignant renditions of the songs are more than mere vocalizations. They’re true dramatic interpretations, as she draws out the layers and meaning Elise finds in the song. She’s compelling in the film’s dramatic scenes, but doubly so when she has a microphone before her. Johan Heldenbergh is every bit her equal. Didier is the more outwardly expressive part as he turns to anger and finds blame in America or, worse, the spirituality that has become Elise’s unspoken life raft for Maybelle. The contrast in performances is just as powerful as the disparity in faith between the two characters. The film needs the strength of one performer to play off the other, though, and power of The Broken Circle Breakdown come primarily through Baetens and Heldenbergh’s believable realization of a once happy couple torn apart by grief.

Take, for example, one heart-rending duet of “If I Needed You” that appears in the latter act of the film. Both parties, dressed in the white get-up of The Broken Circle Breakdown Bluegrass Band, sing sweetly and hesitantly to one another before the softly lit backdrop of the stage. (The warm, subtle cinematography Ruben Impens is a highlight.) The film offers a cutaway to Elise’s hands as she pantomimes with the song. Didier does the same. The hand gestures accompanying the bluegrass song could easily inspire a farce in a Christopher Guest movie, yet The Broken Circle Breakdown allows the performance to convey how the couple is trying to repair the distance that has grown between them. They’re scared, wanting, and both unsure to communicate with the other outside the performance. The performance of “If I Needed You” uses the both the words and the subtext of the song to draw out both the love and the pain Elise and Didier are feeling.

The songs of The Broken Circle Breakdown are especially effective through their familiarity. Perhaps these old bluegrass tunes explain why the film has struck a chord with viewers both in Europe and in North America. They’re a chorus that invites the audience in for the show and offer an emotional bridge. The accessibility afforded by the songs grants The Broken Circle Breakdown enormous the potential for crossover appeal between indie and mainstream audiences. As will the subtitles ease cinephiles wary of bluegrass.

The Broken Circle Breakdown screens in Ottawa at The ByTowne Dec. 13-16.
It is currently screening in Toronto at TIFF Bell Lightbox.