A Pair of Unexpected Outlaws 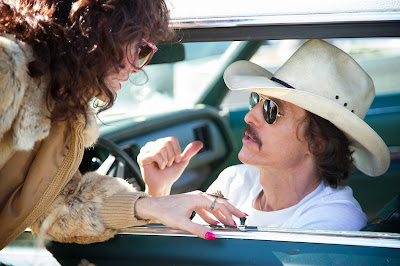 In 1985, the doctors told Ron Woodroof that he had tested positive for HIV. They gave him thirty days to live. Ron, unwilling to relinquish his full-tilt lust for life, refused to follow the doctors’ advice to get his affairs in order before the month was up. He lived until 1992.

Woodroof’s story inspires the compelling AIDS drama Dallas Buyers Club and features Matthew McConaughey in yet another remarkable performance as the cowboyish Woodroof. Dallas Buyers Club, directed by Canadian filmmaker Jean-Marc Vallée (Café de flore, The Young Victoria), is an inspiring dramatization of Woodroof’s fight not only to stay alive, but to treat and better the lives of his fellow patients with HIV/AIDS. Woodroof’s fight for the rights of the HIV/AIDS community is especially surprising because he detests many of the members of that community due to the biases and prejudices he harbours at the beginning of the film.

Ron, a hot-blooded, fun-lovin’, bigoted Texan, is like many people in the early days of AIDS. He assumes it is just a “gay disease.” It must be a mistake, he thinks, when the doctors give him the results. Never mind that the hard-drinking, promiscuous Ron looks so haggard and emaciated that he appears to be at Death’s door. Ron assumes he can’t have HIV because such a diagnosis would betray his randy masculinity, so he goes on a macho bender of denial. All the booze, coke, and whatnot simply deteriorate Ron’s immune system and morph his HIV into full-blown AIDS.

When he finally comes to terms with the diagnosis and decides that he is not going to die, Ron pleads with Eve (Jennifer Garner), the more compassionate of his two doctors, to put him on the trial of the anti-viral AZT (Azidothymidine), but when the hospital denies his request, Ron hightails it to Mexico to score some drugs. In Mexico, Ron finds all kinds of remedies thanks to the help of an unlicensed Mexican doctor (Griffin Dunne) that can better his health far more that the trial drugs in America can. However, these helpful prescriptions aren’t available in the United States because they’re simply not FDA approved.

Woodroof becomes a true cowboy when he recognizes that other AIDS patients need the care that the American hospitals, drug companies, and bureaucrats are withholding. It’s silly that the suits and Uncle Sam won’t provide patients like Ron with the drugs that they’re willing to buy to help them live longer than the doctors foresee. People are willing to pay to live, as Ron finds out rather easily when he brings drugs by the carload into the States and devises a business in which HIV/AIDS patients can purchases memberships and receive all the meds they need. The Dallas Buyers Club is born from the mind of the unlikeliest of AIDS champions.

Ron finds an unexpected ally to increase the membership of the Dallas Buyers Club when a fellow patient named Rayon, played by a near-unrecognizable Jared Leto, convinces Ron to cut her in on the deal in exchange for patrons. The sassy transsexual Rayon probably wouldn’t have been acknowledged by the Ron of the first few scenes of the film, although Ron might have hurled a gay slur in her direction. They’re an unlikely pair, Ron and Rayon: the bigoted outlaw and flamboyant femme.

The partnership with Rayon brings Ron face to face with the narrow-mindedness engulfing the AIDS pandemic. Ostracized by his own friends when they learn that he has AIDS, Ron experiences the senseless, uninformed prejudice that hinders the action required to combat the disease. Dallas Buyers Club shows Ron undergo a kind of spiritual healing as he and Rayon give the AIDS community some grassroots prescriptions. Working among the members of a community with which he would never have associated previously, Dallas Buyers Club shows that some of the hurdles towards treating AIDS were (and are) socially constructed barriers created by bias and poor education on the transmission of the disease.

Dallas Buyers Club rings of the exhaustive efforts in research and rewrites by screenwriters Craig Borten and Melisa Wallack. (Borten began working on the story a month before Woodroof’s death in 1992.) The film is an endearingly personal, humanist portrait of both an individual and a collective impact on AIDS activism. Ron’s evolution throughout the film introduces several characters who represent friends and foes of pandemic. A cranky doctor (Denis O’Hare) ignores the improvement that members of the Dallas Buyers Club see while taking the unapproved medication; alternatively, his colleague, Eve, acknowledges that the hospital’s patients on AZT are not doing nearly as well as those in the care of the Dallas Buyers Club. Eve becomes another ally in the rogue mission of the DBC. Garner offers her best work since Juno in a fine supporting performance to round out the likable champions of the Dallas Buyers Club.

Dallas Buyers Club offers a compelling and ultimately inspiring dramatization of a troubling chapter of history. The film underscores the fact that patients with HIV/AIDS suffered a peculiar symptom of being a pawn in the business of medical care in America, for questions of profit outweighed the benefits of treating the sick. The point about the “business of curing AIDS” was tackled similarly in this year’s doc Fire in the Blood, which also analyzes how costly access to proper medication leaves patients with AIDS in a deadly quandary. One is either unable to afford the price it costs to live or required to find alternative channels and procure the viable treatments on their own and risk punishment for accessing unapproved medication that will keep them alive. Both films underscore how senseless bureaucracy prevents institutions from treating the very people they exist to serve, but the gripping intimacy of Dallas Buyers Club does the subject greater justice.

Vallée does a commendable feat of honouring both the individuals portrayed in Dallas Buyers Club and the larger community implicated in the story of the film. The Québécois director offers a film with the vitality and energy of works like C.R.A.Z.Y. and Café de flore, but Vallée demonstrates a great hand at formal restraint in Dallas Buyers Club. The style of a Vallée film is there in the refreshing, intimate, and urgent handheld cinematography by Yves Bélanger (Laurence Anyways) and especially in the intricate, dynamic, and energetic editing job by the director himself (credited as John Mac McMurphy) and Martin Pensa. The montage of Ron’s nightmarish bender is an intricate and haunting accomplishment for conveying both the character’s despair and denial.

Dallas Buyers Club is ultimately an actors’ showpiece, though, and Vallée lets the power of the film reside in the strength of the ensemble. McConaughey offers the greatest turn in his recent hot streak of brave, challenging roles. His performance as Ron has a roguish charm and charisma that suits the macho cowboy in his unwieldy stages, but he also makes Ron’s character arc convincing and captivating as he draws out the humanity that’s brought to the surface when Woodroof’s lust for life is given an expiry date. Jared Leto, on the other hand, gives a comeback performance on par with McConaughey’s own return to form. Dallas Buyers Club marks Leto’s first onscreen appearance since 2009’s Mr. Nobody (which is only making its way to US theatres right now) and his magnetic performance as Rayon is a welcome return. Leto immerses himself completely in Rayon’s chameleon charm. McConaughey and Leto shine as the pair of unexpected outlaws. Both actors undergo astonishing physical transformations for their roles and bring to Dallas Buyers Club an equal agility at honouring the subjects of the film. The spirit of the performances gives Dallas Buyers Club a life force seen too rarely onscreen.