Ballad of the Oil Sands 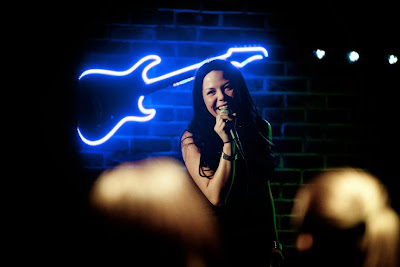 The Oil Sands are a hotbed of Canadian controversy. Oil tycoons rape the Earth by the truckload so that everyone else in the nation (and around the globe) can drive and live on comparatively cheap oil. Is it logical, then, to assume that the communities surrounding Alberta’s Oil Sands are full of grumpy, right-wing, ultra-Conservative no-fun capitalists? Maybe not.


Oil Sands Karaoke might be the most unconventional and unexpected portrait of the troubling Canuck minefield for black gold. Director Charles Wilkinson offers an eco-doc of laudable objectivity that looks at various perspectives of the situation and leaves it up to viewers to decide for themselves what to make of this testy topic. Oil Sands Karaoke offers both sides of the argument and avoids much of the political rhetoric related to environmentalism and capitalism alike by focusing not so much on the Oil Sands themselves, but on the men and women who work and play in the Oil Sands’ prime real estate of Fort McMurray.

The five oil patch workers who comprise the cast of Oil Sands Karaoke embody a work-hard, play-hard philosophy that makes for an entertaining and engaging documentary. The film follows a diverse group of men and women who love to let loose following a week of rough work by congregating at the local watering hole for some karaoke. The five workers are vying for the top title in an upcoming contest, and the problems of the Oil Sands amount to little more than background noise and a hill of beans when such a prize is on the line.

Among the characters of Oil Sands Karaoke are a few stories that Canadians will find familiar. A few men in the film left their lives of debt and unemployment and moved to Alberta in search of the small fortune afforded by the hard work of the Oil Sands. These guys are big, strong, touch-looking oilmen, but at least one of them sings a pretty mean Britney Spears.

Brandy, a petite First Nations woman, explains that she chose working in the field because it offers an escape from the suffocation of sitting in an office every day. She might not be a fraction of the height of a single tire of the big machine she drives in the Oil Sands, but it’s a living for far more than just the big burly types that comprise the stereotype for such heavy work. Also helping to change one’s biases of Oil Sands land is the film’s most insightful character, a cross-dressing crooner and entrepreneur named Iceis Rain. Iceis, self-described as the first openly gay person in the conservative town, details an adolescence of exclusion and abuse. Iceis’s showstopping vocals and glittery aura, however, command the attention of the macho men in the room during karaoke night more strongly than anyone else does. Even in the Oil Sands do politics and prejudice find temporary relief.

In between toe-tapping segments of the camaraderie of karaoke night, Oil Sands Karaoke offers one-on-one interviews with each of the subjects. The personalities note the hardships of working in the Oil Sands, but they also note the rewards, saying that two years of work can clear a lifetime of debt. It might read like sheer propaganda if one hasn’t seen the film, yet the matter-of-fact testimony from the subjects casts the presence of the Oil Sands simply as a way of life in this particular corner of the globe.

The subjects also consider the consequences of the Oil Sands and ask whether the costs outweigh the benefits. None of the five refutes the toll that pillaging the earth has on the environment. Brandy especially notes the double-edged sword of providing for oneself at such a great cost; however, speaking as an eco-conscious person herself, she states that fears are highly exaggerated. One does the best that one can in the Oil Sands, which is pretty much the same philosophy others take anywhere else.

The stories of the five karaoke enthusiasts suggest that the terrain of Oil Sands is a necessary evil that provides the comforts and conveniences that Canadians have come to enjoy. It’s ultimately a question of supply and demand, one Fort McMurray resident reminds viewers of Oil Sands Karaoke as she tends bar while the others sing. If Canadians didn’t drive their cars to and from work or, say, buy mass quantities of food in bulk, the controversy of the Oil Sands would be a needless question. The film alludes that large-scale ideological shifts are needed to produce any tangible change.

Oil Sands Karaoke might provide one of the most favourable views of the oil industry the subgenre of the eco-doc has ever seen, but there’s no mistaking that Wilkinson wants his audience to consider the topic. For all the fun of the karaoke, the film is constantly aware of the severity of the backdrop. The film is framed by a long shot of a giant heavy vehicle, like the one Brandy drives, making its way to and from the oil patch. Oil Sands Karaoke portrays a circular argument for the Oil Sands and for the residents of the Fort McMurray: only a profound shift will curb the mining, but the cushy living reveals the profit of feeding such a destructive ideology, as aerial shots of Fort McMurray and the Oil Sands reveal a barren and ravaged terrain. It’s the price of oil, and no amount of testimony can outweigh the visual power—and proof—of the desecration wrought upon the land. The land might fit the mental image one has of the Oil Sands, but this portrait of the people who work there could have some viewers reconsidering their tune.

Oil Sands Karaoke is currently playing in Toronto at The Carlton.
It screens in Ottawa at The ByTowne Nov. 13-15.