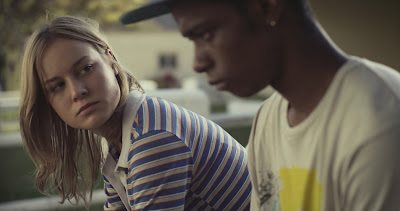 Screaming, cussing, fighting, crying, healing. It’s just a regular day at Short Term 12. Short Term 12, the subject of Destin Cretton’s film of the same name, is a foster care facility for at-risk teenagers. Cretton ends the film virtually as it begins with Grace (Brie Larson) running after an escaped resident while her fellow staffers follow suit. The scars are healing by the end of Short Term 12, though, and what feels like an escape from hell in one scene plays like a run for freedom in the next. It might just be another day at the facility, but Short Term 12 is not just another film: This raw emotional rollercoaster is American independent filmmaking at its finest.

Short Term 12 will have viewers tense in their seats as they watch Grace help the kids of Short Term 12 get through the day by day. The kids couldn’t have a better person on the floor staff than Grace. She connects with the residents of Short Term 12 and, along with the help of her fellow staffers, helps them get to the place of emotional security they need to feel better. Things at Short Term 12 are thrown for a bit of loop, though, with the arrival of an aggressive young girl named Jayden (Kaitlin Dever). Jayden’s arrival probably isn’t anything abnormal considering the way Cretton frames Short Term 12 in such an intimate observational way. She clearly doesn’t want to be at the facility and uses anger and aloofness to mask her vulnerability.

Grace sees something of herself in Jayden, though, which might explain why this indefatigable staffer becomes over-interested in the new resident who isn’t all that different from everyone else at the facility. Grace, a victim of domestic abuse herself during her childhood, is still feeling the wounds that are raw and visible on Jayden. Grace must confront her own trauma through Jayden as she faces the prospect of motherhood—she and her long-term boyfriend/ co-worker Mason (John Gallagher Jr.) are newly pregnant—and cast aside her fears that she’ll continue her father’s cycle of violence.

Grace’s dilemma is an intriguing one, for Short Term 12 asks the audience whether one can cross the line of objective care while remaining a professional. The floor staff at Short Term 12 have a level of intimacy one senses is lacking from the clinical counselling sessions that are altogether absent from the film. These kids have been victimized by their closest guardians, so opening up to an adult probably isn’t going to come easily; however, as the staffers build a daily rapport, they see cries for help and expressions of heartache and anger that can’t find words in a one-on-one conversation.

Cretton finds an extraordinary way of giving a voice to the kids of Short Term 12 in a manner that is indirect, yet powerfully clear. Jayden, for example, devises a children’s story about an innocent octopus that is befriended by a shark that masks its meanness with a cordial smile. As Dever recites the story in a remarkably heartfelt monologue, Short Term 12 builds a devastating portrait of how a victim internalizes fear, anger, and self-loathing, which, for Jayden, manifests itself as hostility and aggression. Jayden is the octopus, but she plays the shark, too, given the outbursts she uses to keep people from getting close. Just look at her attack on Grace when the staffer tries to make her feel special on her birthday. Jayden’s assault with a cupcake is one of the alternatively gut-wrenching and vibrantly hilarious moments in Short Term 12 in which Cretton and his talented ensemble hold the camera’s gaze on the exhausting physical and emotional struggle the staffers use to sedate the residents. Short Term 12 shows the staffers’ ability to draw out the humour and remain positive in a difficult situation so that the kids will feel safe and reassured.

Another troubled teen at Short Term 12 is coming to the end of the journey that Jayden is only beginning. Markus, played with scene-stealing force by Keith Stanfield, will be leaving Short Term 12 now that he’s turning 18. Markus shares Jayden’s aggression, if only as a defense mechanism to ward off the fears of abuse that return with the news of his release. Markus, like Jayden, expresses his anxiety in a poetically intimate scene with one of the staffers.

A budding poet and rapper, Markus performs a new song for Mason. Markus’s rap song is an aggressive beat that voices the abuse he faced at the hands of his mother. The imagery of the explicit song is a brutal reminder of what could happen if a troubled youth like Markus doesn’t get the attention, care, and love he needs. Mason is at odds for words when Markus finishes the rhythmic chorus that pulses with the passion of Stanfield’s delivery. The song should leave viewers stunned in their seats unable to find a response that won’t seem pithy in light of the lyrics. The sequence is one of the most striking musical moments of any film this year, as it uses the syntax and beat of a song to say what pure dialogue cannot. The scene is the clincher of Short Term 12’s bold first act.

If Stanfield’s performance draws viewers into the first act of Short Term 12 and Dever delivers a heady blow when the film approaches its climax, then every frame of Short Term 12 is held together by the raw power of Larson’s lead performance. Larson previously appeared as the silent oft-texting sister of Joseph Gordon-Levitt in Don Jon and, while she was funny without having much to do in that film, the step from from film to the next is astonishing. It’s one of the breakout turns of the independent film scene this year—perhaps the dramatic counterpart to Greta Gerwig’s infectiously giddy turn in Frances Ha. Larson is emotional force in Short Term 12, playing a young woman undergoing the healing process while healing others herself. Grace is a doggedly upbeat presence and Larson makes the conviction within her character ring truest when Grace steps beyond her bound and makes the connections that her superiors will not. Larson is a true revelation.

Short Term 12 is a small miracle of a film. It finds power in the intimacy of its independent scope, putting the viewer into the passion of the staffers with the shaky handheld camera work that observes the group sessions and scheduled activity. Some of the scenes are so unadulterated that the film resembles a dramatic companion to Allan King’s documentary Warrendale, albeit without the critical eye underlying the observational gaze of the controversial treatment depicted in the 1967 film. Short Term 12 holds most strongly, though, when showing the down-to-earth convictions of the staffers at the facility. The film is bound to knock you over with its potent yet poetic realism.

Short Term 12 opens in Ottawa at The ByTowne November 29.
It is currently screening in Toronto at TIFF Bell Lightbox.