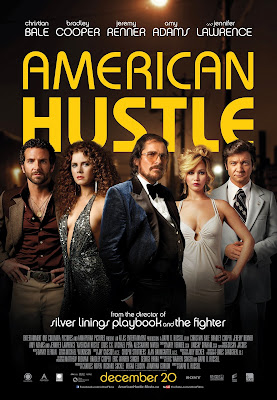 We also hustle for free tickets.


Synopsis: A fictional film set in the seductive world of one of the most stunning scandals to rock our nation, American Hustle tells the story of brilliant con man Irving Rosenfeld (Christian Bale), who along with his equally cunning British partner and lover Sydney Prosser (Amy Adams) is forced to work for a wild unhinged FBI agent Richie DiMaso (Bradley Cooper). DiMaso pushes them into a world of Jersey power brokers and mafia that's as dangerous as it is enchanting. Carmen Polito (Jeremy Renner), the passionate, volatile, New Jersey political operator caught between the con-artists and Feds. Irving's unpredictable wife Rosalyn (Jennifer Lawrence) could be the one to pull the thread that brings the entire world crashing down.

Thanks to our friends at eOne Films, Cinemablographer has prize packs and passes to giveaway to the Ottawa sneak peek of American Hustle. All you have to do to enter is answer the following question:

Send your answer to contests@cinemablographer.com with the subject “Hustle.”
Contest closes Friday, December 13th at noon.
Screening takes place Monday, December 16 at the Cineplex South Keys at 7:00 pm.
Bonus entries go to anyone who shares this contest on Twitter and Facebook!