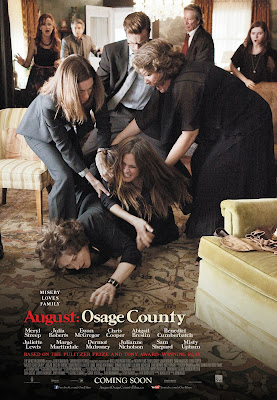 If you’ve been reading the pages of this here blog, you’ll know that Cinemablographer.com is a pretty big fan of the incomparable Meryl Streep. (And if you’re a new reader, welcome!) Meryl has been earning rave reviews for her tour-de-force performance in the upcoming August: Osage County ever since the film premiered at TIFF this fall.(You can read Cinemablographer’s review for the film here.) Streep headlines a family of acting royalty in her role as Violet Weston, the drug-addled, cancer-ridden, and acid-tongued matriarch of a Southern family. Streep’s onscreen family is played by Julia Roberts, Ewan McGregor, Chris Cooper, Abigail Breslin, Benedict Cumberbatch, Juliette Lewis, Margo Martindale, Dermot Mulroney, Julianne Nicholson, Sam Shepard, and Misty Upham in what is surely the best ensemble cast you’ll see this year.


Synopsis: August: Osage County tells the dark, hilarious and deeply touching story of the strong-willed women of the Weston family, whose lives have diverged until a family crisis brings them back to the Midwest house they grew up in, and to the dysfunctional woman who raised them. Tracy Letts’ Pulitzer Prize-winning play of the same name made its Broadway debut in December 2007 after premiering at Chicago’s legendary Steppenwolf Theatre earlier that year. It continued with a successful international run and was the winner of five Tony Awards in 2008, including Best Play. August: Osage County is directed by John Wells (The Company Men) and features an all-star cast, including Meryl Streep, Julia Roberts, Ewan McGregor, Chris Cooper, Abigail Breslin, Benedict Cumberbatch, Juliette Lewis, Margo Martindale, Dermot Mulroney, Julianne Nicholson, Sam Shepard and Misty Upham.

Thanks to our friends at eOne Films, Cinemablographer has 10 double passes to the Ottawa sneak peek of August: Osage County and 5 double passes to screenings in Vancouver, Victoria, Calgary, Edmonton, Winnipeg, and Halifax.

In August: Osage County, Meryl Streep brings to life a character that was first made famous in the Pulitzer Prize-winning play of the same name. Which of Meryl Streep’s other memorable film roles also originated from a stage play? 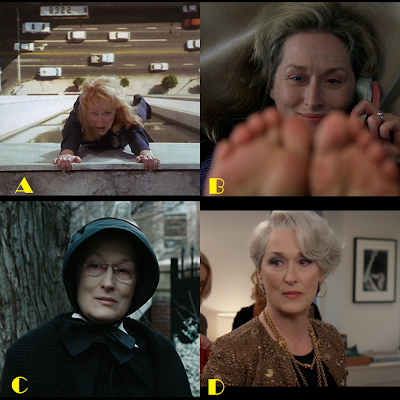 Email your answer to contests@cinemablographer.com with the subject “August – [city]” and make sure to include the city where you would like to see the film.
Contest closes Tuesday, December 17th at noon (Eastern Time).
Screenings takes place December 19th at 7:00 pm.
Bonus entries go to anyone who ‘likes’/shares this contest on Facebook and Twitter!