Capsule Reviews: 'A Place at the Table', 'Kiss of the Damned', 'Monsters University'

More reports from the screener pile:

The people (re: Executive Producers) who brought you the Oscar-nominated documentary Food, Inc. have put America’s fraught diet on the menu once again, but it’s disappointing to report that they’re serving a microwaved meal. The new doc explores the growing percentage of America’s population that is going hungrier day by day. If Food, Inc. offers a scathing and thoroughly objective deconstruction of the unappetizing fact that it is cheaper to eat poorly than it is to eat healthy in America, then A Place at the Table conveys a similar point only without the flavour that had the taste buds of doc fans tingling on all sides of the tongue.

The imbalance of dietary economics and the backwards logic behind the subsidization of resources that create processed junk food, rather than healthy fruits and veggies, has in part accelerated the size of hungry Americans to the size of the obese American stereotype. The fat American with a Big Mac in one hand and a Big Gulp in the other is a complementary part of the same pandemic noted by directors Kristi Jacobson and Lori Silverbush. The roster of talking heads in A Place at the Table explain how many Americans are simply forced to consume fatty foods in order to curb hunger because the systems in place to feed the needy can’t afford to feed them properly. An apple a day becomes an apple fritter a day. An apple a week becomes a luxury.

A Place at the Table makes an admirable and emotionally compelling point that feeding the needy properly today is the best plan for tomorrow. The only thing new in this food flick, though, is a hearty appearance by Jeff Bridges, who is a strong advocate for curbing America’s hunger problem, and a cool score by T-Bone Burnett with songs by The Civil Wars, which makes A Place at the Table a bit hipper than most conventional docs. The film doesn’t really offer anything new in terms of nutritional, economical, or political information, since more or less everything in the film was touched upon in Food, Inc. or other (superior) sources. Ironically, though, this doc might leave viewers hungry for more.

A Place at the Table is now available on home video.

Kiss of the Damned
(USA, 97 min.)
Written and directed by Xan Cassavetes
Starring: Joséphine de La Baume, Milo Ventimiglia, Roxane Mesquida
Why are vampires considered sexy? The undead have no pulse, yet they send blood running to the loins of horror fans, HBO nuts, and teen lit readers in alarming quantities. Vampires have been eroticized ever since they first sucked blood with big screen passion, and one filmmaker after another has made the generic element more literal than the last. Kiss of the Damned is a laughable redux of vampiric eroticism that should have been labelled “For your [Razzie] consideration.” Blargh.

Look no further than Kiss of the Damned for proof that vampire films have exhausted their full potential. It’s time that the night crawlers exited the cinema and disintegrated in the sunlight like Hobbitons emerging from nine hours of excruciating darkness and Peter Jackson movies. There’s nothing new to be seen here and everything that is done in Kiss of the Damned has been done both ad nauseam and better before. This story of undying love between a female vampire (Joséphine de La Baume) and a male human (Milo Ventimiglia) is so underdeveloped and unconvincing that the film feels like a half-baked exercise in genre.

Kiss of the Damned is the feature directorial debut of Xan Cassavetes, the daughter of acclaimed filmmaker John Cassavetes and sister of budding indie darling Zoe Cassavetes (Broken English). Xan certainly has potential, since Kiss of the Damned is aesthetically pleasing. It’s a turgid piece of cinema otherwise, though, and a ludicrous revamp of the sex and blood sucking.

Vampires grow fangs during ecstasy. They bite when they orgasm. “True love never dies,” and all that.

A stake through the screener pile.

Kiss of the Damned is in some kind of unfortunate release or another.

***Note: It occurred to me after making a note whilst writing about The Croods that I had received a screener of 12 Years a Slave, but had already reviewed it. I realize that there is a healthy stack of films I received in the mail that I reviewed during festivals. Hot Docs favourites like Muscle Shoals and Blackfish are in the pile—I hope to revisit them again—as are other goodies like A Hijacking, Shadow Dancer, Prince Avalanche, The Place Beyond the Pines. A copy of The Hunt came as well, which I’ve vowed to revisit on the urging of several readers/tweeps. More updates to come: the stack is growing shorter! 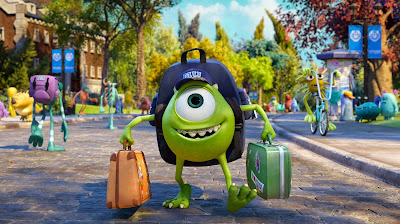 Remember when Pixar used to avoid sequels? Visual storytelling seems to have taken a step back if The Croods can pass for animated cinema that is original  and entertaining enough to earn a passing grade alongside the likes of Monsters University. Monsters University, which probably needs a possessive apostrophe somewhere in its title,  plays as if the great CGI powerhouse of Disney-Pixar is now just churning out movies on autopilot.

Helen Mirren is a welcome addition to the amiable voice team of John Goodman and Billy Crystal, and kids are bound to enjoy this mildly amusing lark even if mom and dad will wish they popped in Monsters, Inc. instead. There’s nothing especially bad about MU, but it’s a case of rinse and repeat in which the story isn’t original or engaging enough to merit a recommendation for the impressive, if familiar, animation alone.