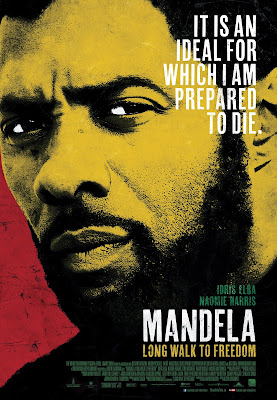 One of the most inspiring true stories hitting the big screen this holiday season is the upcoming biopic Mandela: Long Walk to Freedom. Idris Elba stars as Nelson Mandela in this story about the South African President’s extraordinary journey to becoming the leader of a once segregated nation. The film had an enthusiastic premier at the Toronto International Film Festival earlier this year and is sure to touch audiences when it lands in theatres later this month.

Synopsis: Mandela: Long Walk to Freedom is based on South African President Nelson Mandela’s autobiography of the same name, which chronicles his early life, coming of age, education and 27 years in prison before becoming President and working to rebuild the country’s once segregated society. Idris Elba (Prometheus) stars as Nelson Mandela, Naomie Harris (Skyfall) stars as Winnie Mandela, with Justin Chadwick (The Other Boleyn Girl) directing.

Thanks to our friends, Cinemablographer has 10 double passes to giveaway to the Ottawa sneak peek of eOne Films’ Mandela: Long Walk to Freedom. All you have to do to enter is answer the following question:

Mandela: Long Walk to Freedom is earning buzz for star Idris Elba, but before playing Nelson Mandela, Elba wowed audiences as this character on HBO’s “The Wire”:

Send your answer to contests@cinemablographer.com with the subject “Mandela.”
Contest closes Tuesday, December 10 at noon.
Screening takes place Thursday, December 12 at the Cineplex South Keys at 7:00 pm.
Bonus entries go to anyone who shares this contest on Twitter and Facebook!

Mandela: Long Walk to Freedom opens at The ByTowne December 26 from eOne Films.