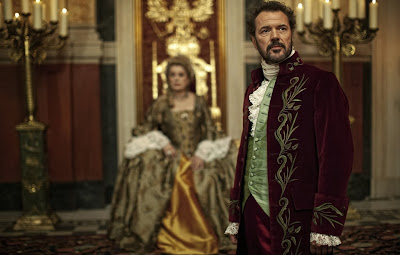 It was another packed night at the European Union Film Festival on Saturday for the Ottawa premiere of Greece’s God Loves Caviar. The film ranks as one of the more high-profile projects at the festival, since this historical picture is an epic international co-production with some big name talents. Stars like John Cleese and Catherine Deneuve are sure to help draw attention to this hit offering of Greek cinema, and the large scale God Loves Caviar is a worthy commercial pic to help advance the national cinema alongside art house hits like Dogtooth.


God Loves Caviar, interestingly enough, offers one of the pictures at the European Union Film Festival that straddles a national/international scope and flavour. The film takes viewers to various corners of the globe and introduces them to a roster of international stars who speak in a variety of languages. Alternatively, it might be the most patriotic film to screen at the festival, given that it is a detailed heritage film and period pic alike. God Loves Caviar is the decidedly Greek retelling of the life of pirate-cum-caviar-baron Ioannis Varvarkis, played by likeable German actor Sebastian Koch (The Lives of Others), who fought the Turks and advanced the Greeks one barrel of scrumptious caviar at a time.

Varvarkis’s story is told in a doubled-pronged flashback when he lands on a Greek island reserved for housing patients with infectious diseases. Varvarkis is near the end of his life, but he’s spending it in exile even though he doesn’t have any disease. Greece is still under British rule, so the stodgy British officer deployed at the island (John Cleese) natters to himself why this old Greek is being sent to his care. Another officer decides to enlighten his senior on the legacy of Varvarkis’s swashbuckling and revolutionary days. Cut alongside this story, a friend of Varvarkis (Evgeniy Stychkin) tells the tale of Varvarkis’s contribution to Greek history to a group of little Greek kids on the island. It’s only fitting that history have two narratives.

Two sets of speakers, however, do not really help God Loves Caviar. The film offers too much of an expansive overview of Varvarkis’s life and it fails to match in depth what is has in scope. The story moves quickly and is often hard to follow, so a viewer wholly ignorant to this chapter of history (i.e.: me) might be horribly lost throughout the intermittent episodes that are presented from Varvarkis’s life.

There’s a whole movie to be done, for example, in dramatizing Varvarkis’s relationship with Catherine the Great (played by a well-cast Catherine Deneuve, although the role itself unfortunately offers her very little to do). Catherine recognizes Varvarkis’s bravery and skills on the sea—and she appreciates the bountiful riches of caviar he brings in return. The story between the two could easily fill a void left in recent historical epics and offer something akin to the story of Elizabeth and Walter Raleigh in Elizabeth: The Golden Age, but the bloated history lesson doesn’t realize the relationship between Varvarkis and Catherine fully enough to convey the political implications in their allegiance. One knows that Catherine poses a great ally—she’s Catherine the Great, after all—yet God Loves Caviar never really makes it clear how Varvarkis revolutionized Greece aside from exporting some decadent fish eggs. A postscript fills in some blanks, but it’s not enough, especially since God Loves Caviar reeks of nationalist hero-worshipping without ever making it clear what exactly Varvarkis did besides strike it rich with nuggets of black gold.

God Loves Caviar might have been a great movie with, say, an extra forty minutes of meat packed on to the skeletal scope of the project. However, it’s still an entertaining(ish) and impressively rendered historical epic, with top-notch costumes by Lala Huete making it one of the more detailed and meticulously crafted films of the festival in spite of the stilted storytelling and awkward framing device. Rousing pirate movies at the European Union Film Festival are just as rare in the programme as are Greek films with John Cleese and Catherine Deneuve, so novelty might be the biggest draw of the film. The story of Varkarkis’s capitalist winning streak with a socialist’s flair for giving back to the common man also helps God Loves Caviar feel relevant even if the story itself is a little murky. One can sense why this story might be worth retelling now that Greece has hit an economic rough patch, and further explains how the rousing story of robbing from the rich and giving back to the poor made God Loves Caviar a box office hit on its home turf.

God Loves Caviar screened in Ottawa at the European Union Film Festival on November 30th.
It screens at Vancouver’s EUFF on December 4th at 8:30 pm.