'Mandela' a Fine and Fitting Tribute 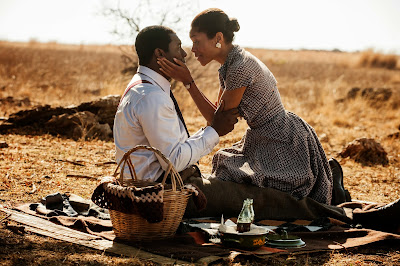 
It seems pointless to criticize the pace of Mandela: Long Walk to Freedom or the inevitable sense of bloat that occurs when a film encompasses several decades in the life of one man. What Mandela: Long Walk to Freedom does well seems to be all that matters after seeing it last night: the film captures Mandela’s humanist philosophy and kind spirit. British actor Idris Elba (Pacific Rim, HBO’s “The Wire”) gives a performance of dignity and grace as Mandela, playing the leader from his early years as a lawyer to the years of his retirement.

It’s a tough act to portray such a well-known and revered subject, especially since viewers will doubtlessly approach Mandela with twice as much reverence for its subject as they might have last week. It’s doubly difficult, too, when Mandela was recently portrayed in a spot-on performance by the great Morgan Freeman in 2009’s Invictus. Those are some big shoes to fill for any actor, but Elba rises to the challenge and gives a performance that honours its real-life counterpart and offers a fine dramatic interpretation in its own right. Elba has the voice and careful diction of Mandela down pat, just as well as he does the man’s composure and comportment.

If Elba gives a fine performance as Nelson Mandela, then audiences are doubly treated by the fiery supporting turn by Naomie Harris (Skyfall) as Mandela’s ex-wife, Winnie. Harris, too, holds her own in comparison to Jennifer Hudson’s take on the former Mrs. Mandela in the somewhat unfairly maligned Winnie. Winnie Mandela is a bit more fleshed out in this biographical rendering of the Mandelas’ life, though, and audiences are afforded a bit more room to judge Winnie’s madness and criminality in some of the film’s fine juxtapositions that draw out Nelson Mandela’s logical spirit, which was essential to finding peace and ending the institutionalized racism of apartheid.

Mandela: Long Walk to Freedom sees Winnie evolve from hot-blooded activist to violent radical during the years of Nelson Mandela’s imprisonment. Like Winnie, Mandela: Long Walk to Freedom covers Winnie Mandela’s own time spent in prison while her husband remained behind bars on Robben Island. Unlike her husband, though, Winnie is placed in solitary confinement, which might explain the frazzled madness within Harris’s spectacular performance when Winnie emerges from the shadows of her cell after sixteen months.

What Mandela: Long Walk to Freedom does with the two disparate character arcs of the Mandelas, though, is show how two people can adopt radically different perspectives and worldviews. While Winnie takes to arms and violence, countering the whites with wrath and hatred, Nelson adopts a philosophy of peace and forgiveness. The film conveys Mandela’s philosophy that the higher road was often the hardest one to take. One especially striking scene, for example, sees Mandela reproach his grandchildren for taunting two of the prison guards simply because they’re white. “That’s what they do to us,” Mandela instructs his descendants, “and if we treat them as they do us, then we’re no better than they are.” While Mandela: Long Walk to Freedom glosses over much of the context and subtext for the years dramatized onscreen, the film captures the lesson that a good leader must understand the underlying conflict and educate his progeny to learn from their anger, rather than simply react to anger with more anger.

The script by William Nicholson (Les Misérables) covers considerable terrain in the days of a ninety-five year old man who saw many milestones in his lifetime. This overview of Mandela’s early beginnings and the continuation of his fight from within the prison walls also offers enough unflattering depictions of the man (re: his womanizing) to avoid premature canonization. Some more context regarding the violence that saw blacks killing blacks amidst the apartheid struggle might have been appreciated, though, as Long Walk to Freedom doesn’t always explain the broader scope of the situation as well as it does some of the more intimate workings of Mandela’s personal life. His troubled marriage to Winnie receives far more screentime than his years in Presidential office do, but the film smartly uses the relationship between Nelson and Winnie to underscore the point that love comes naturally, yet one is taught to hate.

While the performances by Elba and Harris ensure that this biopic is a worthy dramatization, Mandela: Long Walk to Freedom might not be as strong an entry into Mandela moviedom as 2009’s Invictus. If Mandela: Long Walk to Freedom covers too much terrain, the film by Clint Eastwood manages to draw out the same spirit and philosophy of Mandela’s leadership by zeroing in on his handling of the 1995 Rugby World Cup to unite South Africa in a symbolic victory. Side by side, though, Invictus and Long Walk to Freedom are both necessary viewings to enlighten audiences on the legacy of a man without equal. The final scene of Mandela: Long Walk to Freedom will leave viewers touched by Mandela’s life and story as a beautiful aerial shot by DP Lol Crawley captures Mandela walking through the tall grass and climbing a hill in the soft light of the sunset as Elba explains in voiceover how one can best serve the world with love. It’s finale that eerily anticipates the legacy Mandela left behind.

Mandela: Long Walk to Freedom opens in Ottawa at The ByTowne Dec. 26.

Do you want to see Mandela: Long Walk to Freedom before it hits theatres? Enter to win tickets here!