Some Hustle to Escape 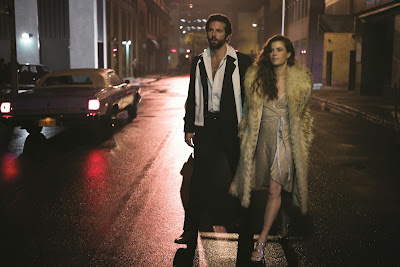 The hair, the clothes, the cleavage, the cast, the con! David O. Russell’s American Hustle has finally landed and it’s as wild a ride as one could have hoped. The Silver Linings Playbook director offers another solid ensemble piece that is easily one of the most enjoyable and entertaining films of the year.


Russell is on a roll after The Fighter and Silver Linings Playbook. American Hustle might not be as tight a film as Playbook is overall, but it’s still an infectiously groovy ride. The film boasts a cast and a director all working at the top of their game.

Christian Bale stars as a potbellied hustler named Irving who sports a laughably elaborate combover and works a shady con game by robbing the rich. His partner in crime, Sydney (Amy Adams), who hustles as her British alter ego Lady Edith, is an even smoother shark when it comes to snapping up easy marks. As Bale and Adams alternatively tell their grifter tale in the Goodfellas-ish voiceover that peppers the film, Irving and Sidney are such a good match (save for the fact that Irving’s married) that there is no score they can’t pull off with their love and skills combined. It’s inevitable, though, that anyone playing the long con will eventually be caught.

Enter Richie (Bradley Cooper). Richie is probably the biggest sucker to be had in American Hustle, as he’s marked by his silly man-perm that makes him look like someone’s mom who just got out of prison. Richie works for the FBI and busts Irving and Sydney’s confidence game, but the sly hustlers work the system and offer to help the feds catch bigger fish as they work their game into political circles and criminal networks to expose the players who help the two worlds overlap.

American Hustle is loosely inspired by the sensational ABSCAM scandal of the 1970s that caught a number of politicians greasing their palms and lining their pockets in the name of Uncle Sam. Everyone hustles in America. It’s how one gets by. But American Hustle has a riot with the national pastime and makes a great caper using the convoluted game that everyone plays to survive.

Hustling is the motive that underlies everything in Russell’s film. Whether it’s for love or for money, Irving and Sydney are always finding an angle with which they can wedge a situation to play out to their advantage. Even Irving’s wife, Rosalyn (played by Jennifer Lawrence, in her biggest bombshell of a performance yet), is a fast-talking player who knows how tits and ass can swing the odds in her favour. Like Sydney, Rosalyn hustles to survive, but she’s wholly ignorant of the consequences.

Everyone plays each other in this elaborately layered ensemble piece. The con is long and the twists offer some genuine surprises as the crackling screenplay by Russell and Eric Singer toys with the audience until the final reveal. There is nobody one can entirely trust in this film, especially since American Hustle offers so many perspectives in the narration that it seems as if each character is making a pass for the audience’s loyalty. American Hustle even uses the underlying love story between Irving and Sydney as a kind of betting chip to play the audience. It’s impossible to tell whether Irving loves Sydney as much as he says she does (since he stands by Rosalyn and their son) and it’s twice as difficult to read Sydney (since she’s playing with Richie as Lady Edith). The money transfer with Mayor Carmine Polito (Jeremy Renner, who looks about a decade too young for the part) almost feels like a McGuffin as the hustlers slide a briefcase under the table in a double-edged wager.

American Hustle situates the viewer at the centre of the con thanks to the ever-moving camera that graces a David O. Russell film. It’s like watching a game of Three Card Monte as the constant motion of the Steadicam moves about the players and observes all kinds of double deals and layers that put the hustlers in deep. The motion and energy keeps one on edge throughout the rapid-fire riot of American Hustle: we’re in a constant state of anticipation for either the burst of laughter or the burst of Scorsese-like violence to which the film seems to be building.

The film is marred only by its overlength as the energy of American Hustle starts to sputter as the film clocks far over the two-hour mark. Hustle feels at least a half-hour too long for a film that moves at such a clever and economical pace. American Hustle is nevertheless 137 minutes of solid escapism, though, as the caper, set to an electrifying soundtrack, builds to a great payoff.

American Hustle is so much fun, though, because each of the hustlers plays his or her role to the hilt. Christian Bale is a riot as corpulent con man, playing the role as large as Irving’s belly and as wild as his freaky hairdo. Bradley Cooper follows-up his impressive turn in Silver Linings Playbook with an even better performance as Richie: Richie’s not as manic a role as Pat in SLP, but he offers Cooper a wider range to play the fool. The FBI guy is an affable loser. 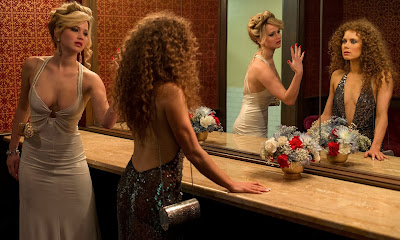 Especially good are Bale and Cooper’s female co-stars, Adams and Lawrence, with whom they collaborated in Russell’s The Fighter and Silver Linings Playbook, respectively. Adams is very strong as Sydney. Not only does she boast some of the most Oscar-worthy cleavage since Queen Latifah in Chicago, Adams plays the character deepest into the hustle with her hilariously phony British accent and calculated coolness. Adams gives the subtlest performance in a film with lots of big acting.

The biggest performance, though, comes from Jennifer Lawrence as the fast hussy Rosalyn. Lawrence is larger than life as the gaudy loudmouth. Whether she’s slinking seductively across the bed sheets, rocking out to “Live and Let Die” in rubber gloves, or making cracks about the “science oven,” she steals every scene of American Hustle. Russell gives the audience only one climactic showdown between the two women in Irving’s life and it’s a great collision of Adams’ restraint and Lawrence’s go-for-broke gusto. Each actress delivers exactly what the film calls for, thus showing how two equally skilled hustlers can match each other tit for tat in the hustle to survive.

Russell gets solid work from a cast of previous collaborators, including Silver Linings Playbook’s Robert De Niro, who appears in a small but memorable role as balding mobster. The cast gels perfectly in this Ocean’s Eleven-like caper. American Hustle is cinematic escapism at its finest, as the impeccably crafted ride whisks the audience through a maze of greedy turns and colourful characters. The atmosphere of the film is fantastic, too, as the stylish costumes of American Hustle make the fun twice as dazzling. The highlight of the film, though, might be the wild hairstyles sported by the hustlers. The outrageous ’dos of the cast offer more than just mere dressing, though. Bale’s brutal combover and Cooper’s funny perm offer instant laughs, but they’re also plot points and giveaways. Not an ounce of detail is gratuitous in this stylish caper.