The Mad Prophet of the Movie House 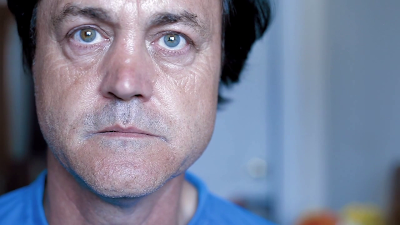 It starts like any other day for the unnamed husband, played by Robert Nolan, in the Canadian indie darling Mourning has Broken. He wakes up and feeds the cat, Mignon (an adorable scene-stealer), while his wife continues to sleep. It seems like the start of a good day as the man prepares a fancy steak for the hungry kitty, cooking it in butter and herbs like his grandma taught him, and creating an air of joie de vivre by chatting to his feline friend in Julia Child-ish faux-French flair.

But the day takes just about the worst turn it possibly can when the husband goes to rejoin his wife in bed. He complains about their ignorant neighbour who mows his lawn in the wee hours and remarks how well she can tune out the annoying buzz. It’s not that the wife is a sound sleeper, though, and he’s just being cranky. She is dead, having passed away in her sleep.

The husband is in a bit of a daze with grief. He tries to live the day and to carry on as if nothing happened. He spends the day ticking off the items on his wife’s “To Do” list for that day. The chores offer a kind of bucket list that allows them to spend the day together for one last time.

It’s not easy to keep appearances as if it were business as usual, though, when one carries so much grief. Mourning had Broken deftly reveals the breakdown of social decorum in today’s fast-paced world where everyone is too glued to technology or too tuned in to their own wants that they can’t respond to the needs of others. The husband collides with a parade of ignorant Torontonians who act brashly and cheekily without any sense of decency for the man on the other side of the conversation.

The husband tries to smile and be polite as, say, the girl at the tailor’s refuses to take back the wife’s unworn dress because the husband doesn’t have the receipt. Oblivious lovebirds clog the path in the park as they walk holding hands and pulling each other outwards because they’re both too distracted with texting and tweeting to observe the people around them. Drivers cause chaos and phony salespeople upsell to the point of madness.

The brotherly filmmaking team of Brett and Jason Butler help the audience pinpoint the moment at which the husband snaps. A montage of frenetic cuts keeps time with the signal light on the husband’s car as he waits at a red light with a pharmacy on one side and a funeral home on the other. The pace accelerates as the husband suffocates while he sits sandwiched in between life and death: all he wants to do is forget the loss of his wife, but the red light in front of him and the ticking light by his side reminds him of the insufferable period of time he’ll spend without her. It’s an agitating sequence to watch as the shots grow shorter and one loses one’s patience waiting for a change. It’s a situation we’ve all been in, but not under the same context.

The husband who was sweet and gentle with the cat simply cracks under the pressure of trying to maintain an air of kindness in a society that doesn’t return the favour. Nolan gives a terrific performance as the bereaved husband loses his composure. One can see the grief on his face and the exasperation the man feels over trying to keep up appearances. The actor takes the character on an impressive range, yet keeps the husband sympathetic even when he starts to reciprocate the bad behaviour and rationalizes that two wrongs make a right.

Mourning has Broken hits its peak when the husband reaches the point at which unsavory social decorum becomes unbearable. He’s at a movie theatre, trying to use a film (in this case, the husband is watching fellow indie i am a good person/ i am a bad person by director Ingrid Veninger, who is credited as an Executive Producer for Mourning has Broken) as an escape from his troubles. The scene is perhaps the ultimate in modern-day ignorance as a barrage of whispers and tiny lights destroy the film experience. The husband snaps like Howard Beale and goes on a lengthy oration. Nolan’s hearty rant lets Mourning has Broken achieve a kind of black comedy: the context of the situation is awful, but the mad prophet of the movie-house is giving the ignorant cogs of society get the tongue-lashing they deserve. It’s a humorous and captivating piece of satire that is instantly relatable, especially for die-hard movie buffs who have always wanted to say what the husband is saying. The gusto of Nolan’s delivery is enough to make one stand in the seat and yell, “I’m mad as hell, and I’m not going to take it anymore!”

Mourning has Broken is a moving and insightful character study that finds power in a small scale. Perhaps it’s a victor of circumstance, as Mourning has Broken was shot on the meager-est of budgets. It was one of a handful of projects kick-started by Executive Producer Ingrid Veninger’s 1K Wave Film Challenge (for which the filmmaker put up $5000 of her own cash and winnings to inspire fellow filmmakers that nothing is impossible) and shot in a mere five and a half days. The Butler Brother rise to the challenge, Mourning has Broken is an honest and authentic film that is relatable in its observation of human (dis)connection and its refreshingly real protagonist.

It’s a shrewd bit of direction to let the power of the film rest on the strength of such an engaging performance. Mourning has Broken is essentially a one man show for Nolan, albeit not in the literal sense of Robert Redford’s solo act of All is Lost, as each of the bit players the husband encounters basically serves as a catalyst to move the actor to another level of mania. Like the aforementioned Redford film, though, Mourning is Broken is a great example of the fine filmmaking one can achieve simply by taking the basic elements of cinema—an actor, a camera, and a good story—and using them in top form.