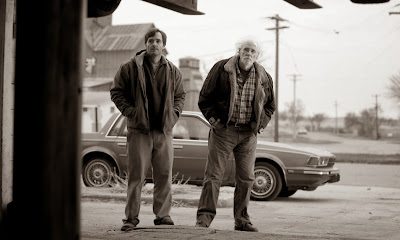 Nebraska is another fine slice of Americana from Alexander Payne. The director of The Descendants, Sideways, and About Schmidt returns with this finely-tuned character study of working-class America. Nebraska, Payne’s first feature for which he is not credited as a writer (that credit goes to first time feature film writer Bob Nelson), offers another of the director’s uncontrived and down-to-earth ensemble pieces. It’s as funny and as heartfelt as anything Payne has ever done.


Nebraska is an old-school effort that looks and feels as modest as its aged protagonist, Woody Grant (played by Cannes winner Bruce Dern). Woody, a man of few words, has received some exciting letter in the mail saying he has won a million dollars. A million bucks! Woody is so keen to claim his winnings that he sets off for Lincoln, Nebraska on foot from his home in sunny Montana. It seems that Woody isn’t all there.

Dern deftly plays a man approaching senility. Woody seems confused that walking across America isn’t the smartest thing for a septuagenarian to do; moreover, he just doesn’t get that the million dollar prize is a mere fantasy. His son, David (Will Forte), and wife, Kate (June Squibb), babble that the Publishers’ Clearing House-type ruse is only a marketing ploy to get poor suckers like Woody to buy some magazines. Squibb is a cantankerous hoot as Kate, as she drops zingers and unladylike remarks in a verbose performance. The woman never shuts up, so it’s no wonder that Woody wants to take the money and run.

David decides to do the nice thing, but probably not the right thing, and humour his dad by driving him across the American heartland so that Woody can claim his pot of fool’s gold. Woody never really seems to know what’s going on as he stumbles around, bumps his head, loses his teeth, and blabs about his great winnings to every Tom, Dick, and Harry from his past that he encounters along the way. All Woody sees are the dollar signs that shine in Dern’s eyes as the old man clings to his fantasy. It’s touching how David joins him, for the road trip will likely be the last great achievement that this aging man will ever have in his lifetime.

Nebraska tells of a man in futile pursuit of the American dream. He can lead a respectable life in retirement with a decent wife and two good sons, but that isn’t enough. He needs the big cash prize to define his success and some money to leave for his descendants, for it seems that a name and a family legacy aren’t enough. Woody’s mantra throughout the trip to Nebraska recites all the material things he’ll buy with his winnings that he can neither use nor possibly need: he wants a new truck even though he can’t legally drive and a new air compressor, well, just because.

As Woody and David make their way to Nebraska, they accumulate an ensemble of colourful family members who all want a share of the prize. Nelson’s script amusingly builds a cast of characters eager to sell out their family ties and friendly pasts for a quick buck. Almost everyone in Woody’s small hometown pins a monetary value on relationships in Nebraska, especially an old friend (Stacey Keach) and David’s pair of Tweedledee and Tweedledum cousins. There’s a morale in Woody’s hometown of Middle America that says, “Ante up” in lieu of “Congratulations!”

David, on the other hand, knows a fraud when he sees one and he doesn’t share his family’s zeal for silly lottery winnings. He’s more taken by the people he meets along the road to Nebraska. The folks from Woody’s past that he has never met nor heard about are what matters, as unspoken family histories become the prize in a greater story.

Forte gives a surprising dramatic turn as David. Woody might drive the plot of the film, but Forte is really the one tasked with carrying it as David becomes his father’s keeper and puts the folly of a financial dream into perspective. Dern is especially fine in a subtly hilarious performance as the troubled, confused Woody. They’re a fine pair to lead Nebraska into another of Payne’s odysseys into the lives of flawed, yet endearing Americans.

Nebraska is Payne’s subtlest film to date as the road trip to claim the winnings reveals an affectionately critical eye for the crumbling of the American Dream. The Dream that anyone can make it big in America with the mere draw of a ticket seems like a Silver Screen farce in the brilliant black-and-white composition Payne employs with cinematographer Phedon Papamichael. Nebraska is one of several films this year to find power in a grayscale America—other notables include Noah Baumbach’s B&W Brooklyn in Frances Ha and Joss Whedon’s art house funk in Much Ado About Nothing. Money as the be-all-and-end-all of a man’s success is outdated. Nebraska looks fondly at the things that matter: family and friends.

The film is an immensely relatable tale as Payne peppers the cast with folksy non-actors or familiar faces that one might recall, but can’t quite pinpoint where from. Some deadpan tableaus of old folks sitting in front of the television, having a visit without saying much to each other except for the odd “What’s that?” could be ripped from the family gathering of any viewer. It’s a quietly hilarious celebration of the mundane.

Nebraska is currently playing in Ottawa at the World Exchange.
Update: Nebraska screens at The ByTowne Feb 6-9 and at The Mayfair beginning Feb 28.