'In the Most Delightful Way!' 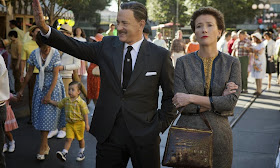 Fidelity might be the most well-trodden angle to approaching adaptation, but it’s the most consistently intriguing way to look at the journeys books take as they become films. Fidelity can be one of the most salacious approaches, too, thanks to the risqué connotation of the word. Writers can feel like cuckolds when moviemakers change their precious works, but such protests might be in vain. An author might not have any right to be unhappy when a screenwriter plays fast and loose with a book because, as André Bazin once said, “he sold it, and thus is guilty of an act of prostitution that deprives him of many of his privileges as the creator of the work.”

P.L. Travers (Emma Thompson) feels branded with the scarlet letter when she explores the offer to sell the rights to her beloved novel Mary Poppins. Mrs. Travers—never “Pamela,” “P.L.” or, heaven forbid, “Pam”—is marked with the Disney D in the utterly sexless adaptation pic Saving Mr. Banks, which dramatizes the rocky road of Mary Poppins’ evolution from cherished book to classic Disney film. Mrs. Travers is at the end of her financial rope when Saving Mr. Banks first whisks the audience to her nice English flat. She’s tapped out both creatively and financially, so her only choice is to meet with Walt Disney (Tom Hanks) and negotiate the screen rights in a deal she’s been refusing for twenty years.

Mrs. Travers might feel like a harlot because she’s cashing in on the story that seems to be the core of her identity. As the crotchety sourpuss tangoes with the Disney clan, namely, Mary Poppins’ screenwriter Don DaGradi (Bradley Whitford), the song writing team of the Sherman Brothers (Jason Schwartzman and B.J. Novak) and, especially, Walt himself, she holds on to the minutest details of the book as if any liberty taken with Mary Poppins and the Banks family is akin to blasphemy. “No, no, no,” prattles the stern battle-axe as she fights to keep every word of Mary Poppins true to the Travers’ version and not the Disney dumbing-down.

Saving Mr. Banks intercuts the story of Mary Poppins’ pre-production with flashback sequences that reveal the story behind the frumpy English authoress and, in turn, her nanny with the fancy umbrella. It turns out that Mrs. Travers, née Helen Goff, had a difficult upbringing in the Australian outback. Her dad, played by surprising Colin Farrell, was a boozy banker and her mum, played by Ruth Wilson (The Lone Ranger), bore too much of a burden to be much of a parent. Things in Mary Poppins that seem inconsequential to the Disney team thus have significant personal value to Travers, as the sporadic flashback episodes reveal why Mrs. Travers might cling to her text so dearly.

Movies about movies are often easy escapism for film buffs and Saving Mr. Banks is no exception. Mary Poppins is essentially a story of redemption through make believe, so Saving Mr. Banks screenwriters Kelly Marcel and Sue Smith have a lot of fun honouring the magic of movies by taking Travers on a transformative arc are she learns to suspend her disbelief and loosen her stiff upper lip. Saving Mr. Banks is a special treat for movie lovers fascinated by the art of adaptation. The battle between Travers and Disney is very much akin to that between the sods in the English department and the fun-loving kids in the Film House, as Travers’ reluctance to permit an adaptation of Mary Poppins lies in her snooty belief that film is fundamentally inferior to the literary arts. She thinks cartoons are silly and songs are dumb. A film is inherently void of substance, she insists, as she throws sheets of the Shermans’ now iconic music out the window to demonstrate its perceived lack of substance as the pages flutter to the ground. “No weight,” Thompson quips in her ferociously deadpan take on the stodgy Travers.

The fight between Travers and Disney is that at the core of fidelity criticism: is a film categorically inferior to book just because it deviates from its source? The question is still a relevant one as, say, critics quibble about the “Barbara ending” in August: Osage County while the film plays just fine if one hasn’t seen the stage drama. Travers assumes that the writer’s interpretation of Mary Poppins is the authoritative reading of the text, yet everyone else’s love for the book—Disney’s included—could stem from his or her own interpretation. Walt nevertheless sees her reluctance to give up Mary Poppins, since his own creation of Mickey Mouse taught him the kinship one feels with one’s characters and of the price one might pay for selling them.

Saving Mr. Banks couldn’t find a more affable pair of co-stars to embody the yin and yang that forms the core of the film’s debate. Emma Thompson shines in her turn as the delightfully frumpy author with daddy issues. She drops zingers with dryness and cordial timing to match Maggie Smith on Downton Abbey, but she also invests a childish heart and sense of wonder into Mrs. Travers as she breaks down the cranky author’s frigidness in the final act. A notable subplot featuring Paul Giamatti’s likable chauffer draws out Travers’ humanity, while Travers becomes an emotional wreck watching Mary Poppins at the premiere as she is overtaken by the Disney magic.

The image of Disney magic is served well in Tom Hanks’s squeaky-clean take on old Walt himself. Hanks is at his jolliest playing the Disney tycoon. He’s cartoonishly animated in this larger-than-life portrayal of Mr. Disney, batting his eyelashes and thrusting his arms with the pantomimes of vintage Mickey Mouse. The role, however, doesn’t afford the same kind of depth that Thompson brings to Travers. Saving Mr. Banks, a Disney film, understandably portrays its creator as a kind of mythic hero. The Walt Disney of Saving Mr. Banks gives audiences a spoonful of sugar to match the medicine of P.L. Travers. (In the most delightful way.)

Everything about the film is safe and family-friendly. Saving Mr. Banks is less a probing of the Disney mystique and more an addition to the magic of an already-magical film. Travers’ modelling of Mr. Banks on her father and Disney’s modelling of Mr. Banks on himself, for example, re-affirms the Disney charm of translating Travers’ work into a big screen adventure. The inconsistent flashback sequences grant the 1965 Julie Andrews/Dick Van Dyke film a layer one hadn’t seen before as Saving Mr. Banks reveals aspects of Travers’ life that worked their way into the film. She just needed Disney to articulate them with dancing penguins so she could cherish the father she eulogized in her book.

Likewise, Saving Mr. Banks does a spot-on job in paralleling both storylines with the original Mary Poppins film, so that one is consistently entranced by nostalgia each time a cue triggers one’s love for the original film. “How much does the girl playing young Helen look like the child of Mary Poppins!” one will marvel as Saving Mr. Banks offers a snippet of footage from the film before cutting to a captivating Emma Thompson as Travers stars at the moviescreen like Amélie and  blubbers for her lost childhood. Ditto the grim appearance of Six Feet Under’s Rachel Griffiths as the no-nonsense nanny with the fancy umbrella who chirps “snip-snap” when she wants something done. There’s an extraordinary attention to detail in Saving Mr. Banks in honouring the original Disney film and Travers’ story in one charming tale.

One could easily look at Saving Mr. Banks, take its innocuous charm and its high-key lighting, and write it off as Disney propaganda. To do so might not be entirely unfair, as Saving Mr. Banks admittedly simplifies much of the rumours and rockiness of the Mary Poppins affair in an audience-friendly ‘Yay Disney!’ crowd-pleaser. Saving Mr. Banks, timed just before the fiftieth anniversary of the beloved Disney film, seems just as destined to endure cynicism as it does blissful nostalgia.

On the other hand, a Disney film about a Disney film allows Saving Mr. Banks to include much of the actual production of Mary Poppins into the drama itself. This film isn’t Hitchcock, which could barely show a snippet of Psycho lore lest it be slapped with a lawsuit. There’s no copyright holder more powerful than Mickey Mouse, so Saving Mr. Banks needs to be a true Disney film for it to take viewers into The Happiest Place on EarthTM and show them enough of Mary Poppins to experience the film once again.

Saving Mr. Banks makes a decent effort, too, to allude to the stickier points of P.L. Travers and Walt Disney that might not sit comfortably with the company’s G-rated image. Travers’ alleged bisexuality, for example, surprisingly makes its way into the film when Walt’s remark that Travers is “no ordinary woman” is followed by a few subtle glances Thompson makes as Travers checks out the behind of a woman in the hallway or scopes out the females in the bar as she sips a lonely pot of tea. The same goes for Mr. Disney. He was rumoured to smoke like a chimney, yet Saving Mr. Banks shows him take not a single puff. The film does, however, give Walt one heck of a phlegmy smoker’s cough and a token line about how he never lets people see him smoke in order to uphold the company image. It’s as on-the-nose as the flashbacks are, but this is, after all, a film by the director of The Blind Side.

Director John Lee Hancock perhaps pulls off the most unexpected feat by showing that a film like Saving Mr. Banks can be completely Disneyfied without much disservice. It’s a very well done piece of classical Hollywood escapism, perfectly tailored and crafted—the score by Thomas Newman and the costumes by Daniel Orlandi are highlights—so that viewers can slip seamlessly into the world of one of the greatest stories ever put onto film. P.L. Travers scoffed at Dinsey's vision, but Saving Mr. Banks shows that there's nothing wrong with family-friendly escapism—so long as one remembers who is making it and why.

It might be safe and sugary, but one could again look to last year’s Hitchcock and recall the sense of violation that arose when the film looked less at the brilliance of Psycho and more at the Great Director’s sexual deviance whilst paralleling him with the man who inspired Norman Bates. Hitchcock felt less faithful to Hitchcock than the sweet-toothed Saving Mr. Banks does to Mr. Disney. P.L. Travers might be the victor here, for Emma Thompson’s resplendent performance ensures that her story has been adapted in the most delightful way.