Bright Nights Ahead for Ottawa Filmgoers 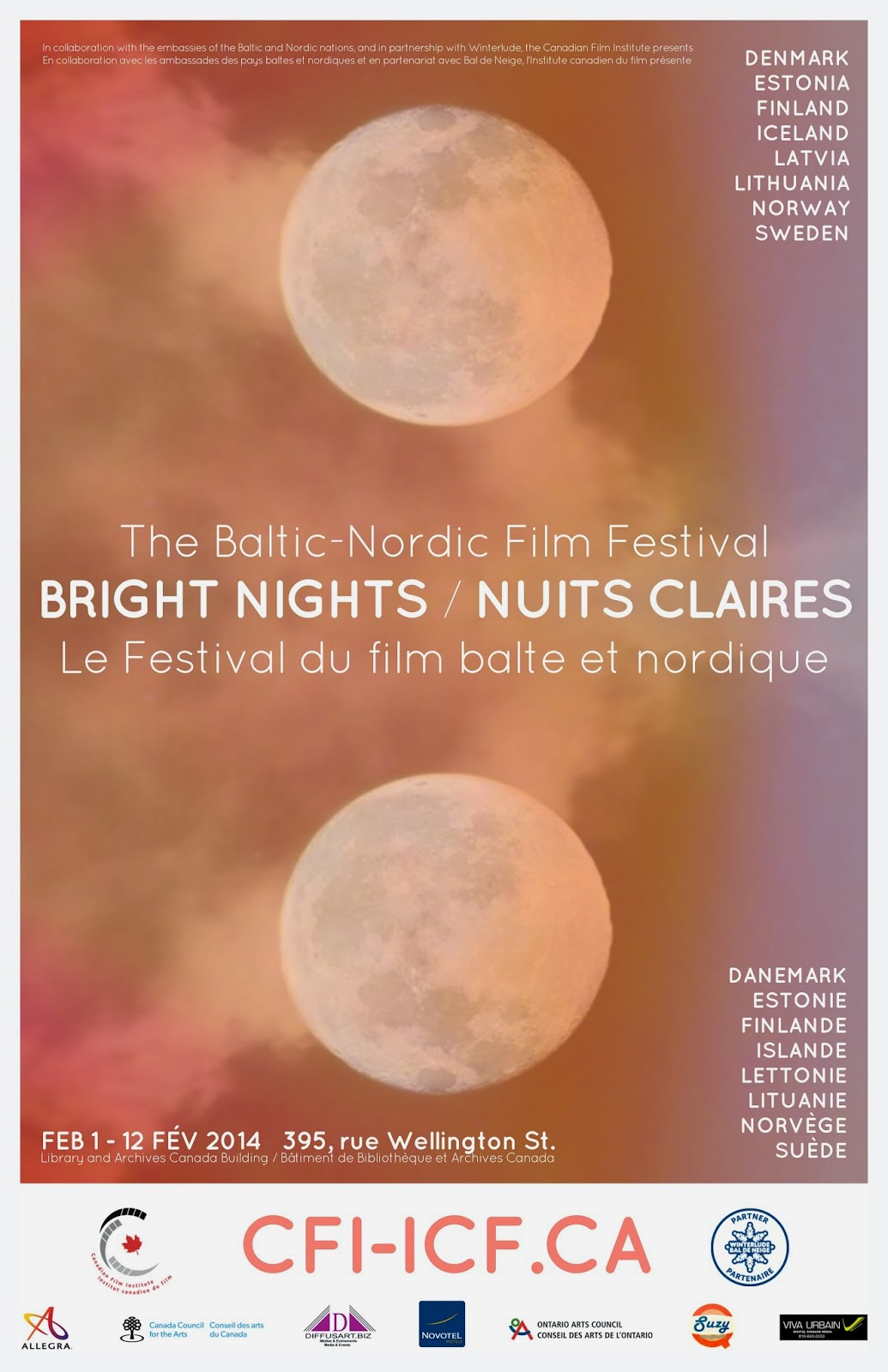 There are bright nights ahead for Ottawa moviegoers. If the Polar Vortex makes skating on the Rideau Canal a chilly endeavour during Winterlude, then the Canadian Film Institute’s Bright Nights Baltic-Nordic Film Festival offers just the ticket for folks looking to warm up and enjoy a movie during the city’s annual winter celebration. CFI Executive Director Tom McSorley playfully referenced the 1965 Canadian film Winter Kept Us Warm during the festival’s launch earlier today, saying the festival would do just that as a respite from the frosty temperatures. 2014 marks the fourth edition of the CFI’s Bright Nights Film Festival, which is held in collaboration with the Embassies of the Baltic-Nordic nations and in partnership with Winterlude. The film festival runs February 1st to 12th during the January 31st to February 17th celebration of Winterlude.


Celebrations for the festival began today at the media launch held at SAW Gallery. The cozy gathering was brightened by the buzz for the upcoming festival and the excitement for how strongly some of the countries participating in the festival made a showing at this year’s Academy Awards. (Denmark, for example, has three films competing in the races: The Hunt, The Act of Killing, and the short film Helium.) The launch was also made lively thanks to the artisan doughnuts provided by Suzy Q, which offered the easiest conversation starter for any food I’ve enjoyed at a presser. (I tried a tasty maple bacon doughnut.)

Talk of film and doughnuts, however, highlights how this year’s Bright Nights Baltic-Nordic Film Festival should be an especially promising celebration of film in the National Capital. Not only do the eight films continue the showcase of European cinema after the success of the recent European Union Film Festival, but the Baltic-Nordic Film Festival also keeps the spirit of cinephilia alive in the downtown core following the recent closure of the cinema at the World Exchange Plaza. This festival is a great opportunity for Ottawans to explore films outside the multiplex, especially since the festival complements other Winterlude festivities they might be enjoying downtown. The enthusiasm at the event was capped off by a screening of the festival’s energetic trailer (embedded below), which was made by CFI programmer Jerrett Zaroski and should inspire as much Shazamming as the trailer for the EUFF did.

This year’s festival opens with the Estonian film Blood Type, a documentary about Estonian soldiers in the Afghan War, which McSorley described as a “fascinating look at the psychology and philosophy of war and soldiers”. Estonia opens the festival, for the country is the head of the Baltic-Nordic, and the opening night will feature an appearance by Blood Type’s director, Leena Linna. Also screening at the festival are two other documentaries (Denmark’s Moonrider and Finland’s My Stuff) and two films that were selected to represent their countries in the Oscar Race for Best Foreign Language Film (Iceland’s The Deep and Latvia’s Mother, I Love You.) The festival concludes with The Last Sentence from legendary Swedish director Jan Troell. All eight films at Bright Nights are Ottawa premieres.

The line-up for this year’s Bright Nights Baltic-Nordic Film Festival is as follows:

Dir. Leena Linna | Estonia | 67 min.
Saturday, Februaruy1 at 7:00 pm
Synopsis: Blood Type is an intense, philosophical documentary about professional Estonian soldiers in the Afghan war. The film weaves together deeply personal revelations of these men with footage of their daily dangers to create an intimate portrait of the soldiers' day-to-day struggles. Linna’s film examines the life of a soldier named Andrei, who lost his leg in the Afghan war two years ago. Having returned to Estonia, Andrei wants nothing more than to reunite with his ‘brothers’ on the battlefield, despite his disability. A provocative film about the warrior mentality and spirit, as well as the consequences of war itself, Blood Type probes beneath the surface of this all too common geopolitical phenomenon.

Dir. Thomas Wangsmo | Norway | 88 min.
Saturday, February 1 at 9:00 pm
Synopsis: On a dark winter evening driving home with his family, Jan hits his neighbours' eight-year-old son. A couple of weeks after the accident Svein, the boy's father, starts growing suspicious of Jan's explanation. Meanwhile, Jan himself is plagued with guilt, and as Svein closes in on the truth, both men are trapped in a downward spiral of desperation that threatens to lead to their undoing.

Dir. Dovilė Gasiūnaitė | Lithuania | 95 min
Wednesday, February 5 at 7:00 pm
Synopsis: Narcissus (from Greek Narkissos) shares the root nark- with narcosis and narcotic. All these words have the same origin in the verb narkao - to intoxicate through a strong smell. In the modern interpretation of the ancient myth Teodore is a handsome and multiply gifted string quartet cello player who knows his own value. He draws people in, but ends up hurting them, yet he is impossible to resist. Teodore abandons his family, career, and friends in his quest for a true challenge. He has yet to find out that his greatest confrontation will be with himself.

Dir. Petri Luukkainen | Finland | 80 min.
Wednesday, Feb 5 at 9:00pm
Synopsis: Petri Luukkainen conducts an experiment with his own life. He packs all his things and puts them in storage. At first naked in an empty apartment, he only allows himself to retrieve one item per day.

Mother, I Love You

Jānis Nords, Latvia, 2013, 83 min.
Saturday, Feb. 8, 4:00 pm
Synopsis: 12-year-old Raimonds tries to cover up a bad note at school and starts a spiral of lies, which spins out of control. He has to venture into Riga’s thrilling night-life to save his saxophone, his friendship and his face in front of his mother. An exciting story about the healing power of truth.

Dir. Daniel Dencik | Denmark | 82 min.
Saturday, Feburary 8 at 7:00pm
Synopsis: Moon Rider is a coming-of-age story about the bike rider Rasmus Quaade. The film follows young Rasmus’ struggle to become a professional rider, a rough and winding road through hell and back. Shot on fragile Super8 and raw helmet-cam, it is a journey seen from the inside of a young man's head - it is a personal story entrusted to the spectator by Rasmus himself from his intimate diary… The film paints an honest and heartbreaking picture of the extreme and lonely life of a young championship rider.

Dir. Baltasar Kormákur | Iceland | 95 min.
Saturday, February 8 at 9:00 pm
Synopsis: Based on actual events, a fisherman tries to survive in the freezing ocean after his boat capsizes off the south coast of Iceland.

Dir. Jan Troell | Sweden | 126 min.
Wednesday, February 12 at 7:00 pm
Synopsis: Torgny Segerstedt was one of the leading journalists in Sweden in the 20th century. He fought a one man battle against Hitler and the Nazi regime until his death in 1945 and during these tumultuous times his private life was marked by a world in chaos, as he falls in love with his friend's wife while married himself. The Last Setence weaves together the story of a psychological love story with a portrayal of the political situation Sweden found itself in during the Second World War. A gripping, dramatic and poetic tale about a man, who could not be silenced.

All films for will screen in their original language with English subtitles.
Tickets are $12 for the general public and $8 for members, seniors, and students, and the festival offers a Bright Nights pass for all eight films at $40 for members and $50 for non-members.

All films screen in the auditorium at Library and Archives Canada, 395 Wellington St.