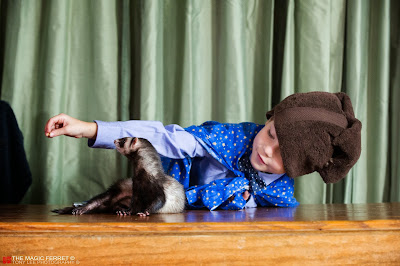 Everyone’s raved about Ulysses the cat and Uggie the dog, so when will ferrets get their due credit? They look like furry little bandits, which might explain why they’ve given the spotlight to cuddly cats and slobbery dogs. The most memorable film ferret folks will have probably seen wasn’t even referred to by its proper name: remember that scene in the Coen Brothers’ The Big Lebowski where the German nihilists invade The Dude’s home and throw a marmot in the bathtub? Said marmot is actually a ferret. The Dudes who created Ulysses with such care didn’t give the waterlogged ferret the same love. (California laws also prevent folks from keeping ferrets as pets.)

Canadian director Alison Parker, on the other hand, hails from a land where these furry critters are enjoyed as pets. She’s made it her mission to give ferrets their due. Parker directs her own pet ferret Falcor (he even has his own IMDb page) in his second dramatic short, the delightful The Magic Ferret, after starring in Parker’s Jake and Jasper: A Ferret Tale. Falcor appears as Booger the Magic Ferret and he’s the star attraction in the magic act of an imaginative boy named Sam, played by an impressive Jacob Tremblay, who handles the emotional moments of the film just as well as he does the film’s cutesy magic acts. The Magic Ferret is a lively feel-good movie about the power of the imagination.

Sam, an orphan under the care of kind Mrs. Rassenti, played by Beverley Elliott (a highlight of the film), uses his magic as The Great Sambini to charm and entrance prospective parents. The Magic Ferret lets Sam say “Abracadabra!” when Mr. and Mrs. Parker (Fred Ewaniuk of “Dan for Mayor” and “Corner Gas” fame and Lisa Durupt from HBO Canada’s “Less than Kind”) come to visit. The trick goes awry in a cloud of smelly smoke, so the disheartened Sam enlists Mrs. Rassenti and Booger again to cast a spell over his potential parentals.

Booger is an especially good performer even if he botches Sam’s first act. Falcor the Ferret is a cute little scene-stealer: Booger seems like an inquisitive critter as he bobs before the camera and looks just as curious as well are by the spell The Great Sambini is about to cast. This ferret really is enchanting!

The Magic Ferret conjures a flight of the imagination as Sam and Booger work their magic. Parker and cinematographer Shawn Seifert show the escapist thrill of Sam’s act by pulling the Parkers and the audience into a charming dreamlike world. As the composition changes from the ho-hum life of the orphanage to the thrill of a theatrical performance, The Magic Ferret  lets everyone be a kid again as they experience Sam's feat of make believe. Sam’s trick with Booger lets him escape his troubles, and shares the thrill of escapism with the audience in a feat of family-friendly magic.

The bouncy cover of “Magic” from Selena Gomez is a spot-on music choice for the film, as The Magic Ferret should easily lift the spirits of viewers as the film ends with a playful wink from Booger before the credits roll. The fun of The Magic Ferret continues right through the end credits as the film invites the audience to play a game of Spot the Ferret as Booger pops in and out of the words on the screen. It’s a cute little film that should please parents, young viewers, and ferret fans alike.