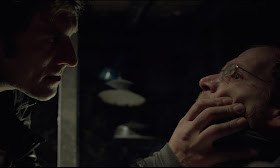 It’s a testament to Quentin Tarantino’s influence on the culture of cinephilia that Big Bad Wolves is garnering as much attention as it is. The film geek director dubbed this Israeli dark comedy the best film of 2013 during an appearance at the Busan International Film Festival last fall and Big Bad Wolves has ever since been a point of anticipation for cinephiles that have been reared on the school of Tarantino. Big Bad Wolves is another decent example of a piece of world cinema finding its way into the spotlight thanks to Tarantino’s encouragement, but one can’t help but wish that the director endorsed a better film. Big Bad Wolves is, likely many a film by Tarantino himself, stylish and ultra-violent. Big Bad Wolves, however, never really uses said violence to make a compelling point. This film by Aharon Keshales and Navot Papushado huffs and puffs, but it will hardly blow your movie house down.

Big Bad Wolves stars with a jolt of violence as a quartet of Israeli cops lead a suspect into an abandoned warehouse and strap him to a chair. The man, Dror (Rotem Keinan), is suspected of abducting and murdering several young girls. Another girl has gone missing, so the cops decide to question Dror the hard way to get speedy results.

Big Bad Wolves never gives the audience much reason to believe that Dror is actually a pedophile. The police, led by Micki (Lior Ashkanzi), never articulate the evidence on which they base their suspicion. Their baseless, senseless violence lets Dror walk and gets Micki bumped from the department.

The paranoia continues, though, when Micki decides to trail Dror on his own. His mission is paralleled by that of the victim’s father, Gidi (Tzahi Grad), who decides to inflict upon Dror the same terrible violence his daughter endured before she died. Micki and Gidi become unlikely allies and play a game of bad cop/bad cop to make Dror talk.

Big Bad Wolves sets its trio of unlikable perpetrators on an endless cycle of violence. Dror, as Gidi explains, allegedly drugged his victims, raped them, and then broke their hands and pulled out their fingernails before decapitating them with a rusty saw. Gidi lists an unappetizing menu before the torture begins and it doesn’t get any more satisfying with each course that’s dished out.

The premise of a victim’s father taking matters into his own hands is executed with greater pay-off in Podz’s grimmer, but more morally complex,  7 Day (Les 7 jours du talion) or, more recently Denis Villeneuve's Prisoners, as all three films shock the audience with brutal violence and put audiences in a vice as they twist sympathy for the killers and victims alike. If 7 Days and Prisoners are a haunting cases that being a victim gives no right for vigilante justice, then Big Bad Wolves blurs the line between victim and perpetrator altogether. The film’s ambiguity, however, never really pays off.

Directors Keshales and Papushado offer a string of unrelenting violence as Gidi and Micki—both fathers themselves—expel more efforts satisfying their bloodlust than solving their investigation. Big Bad Wolves cuts the tension by interrupting Gidi’s gleeful assault on Dror’s body with comical interjections: a phone call from his mother, for example, or a break to eat some soup. Each pause lets the anticipation of violence linger—this man doesn’t seem like such a big bad wolf now that he has such a girly ringtone—and it perverts the atmosphere with its incongruous tonal shifts. (Like, for example, the interlude in which the torture-master makes a white cake to the tune of Buddy Holly’s “Everyday”.) Big Bad Wolves amplifies the violence in turn through these darkly comedic pauses. The film is almost sadistic with its ability to make violence a punch line.

Grad is especially funny as Gidi, the most merciless and mocking man of the trio. Playing it straight and relishing the film’s deadpan approach for brutal violence, his performance gives the film just the right layer of frosting to match all the squeamishness and bloody fixings. Ashkanzi is compelling and his performance as Micki gives the film something close enough to a moral centre to compensate for the extremity of his actions. Keinan, on the other hand, is less convincing as Dror. It’s not necessarily a fault in casting, for several characters in Big Bad Wolves note that Dror looks perfectly harmless, but the actor doesn’t have the physical restraint needed to take the punches the film throw at him. Watch Dror’s hands that are supposed to have been smashed with a hammer and the illusion of the film deflates.

The mix of humour and brutal violence provides an opera of splat-n-chuckle mayhem for audiences that like their steaks bloody and delivered with a show. Big Bad Wolves feels indebted to the works of Tarantino (the influence of Reservoir Dogs is plainly clear) and other filmmakers like Guy Richie, Robert Rodriguez, and Eli Roth who have successfully pushed the envelope by offering stylish, graphic violence of the hard-R variety, yet made it consistently watchable by balancing the tone of the delivery. The editing by Avraham Pirchi delivers the blows of Big Bad Wolves with the right comedic timing, while the cinematography by Chilik Michaeli alternately bathes the film in sinister darkness and cheery brightness. Big Bad Wolves, however, never really goes beyond the level of stylish, superficial violence.

The film plays—or, more accurately, dabbles—in the greater context of paranoia and violence in which the big bad wolves find themselves. Gidi’s torture venue (a rented cottage) is surrounded by Arab villages. One neighbour rides around the cottage area on a horse like some figure out of spaghetti western, but nothing else in the film intersects with the violence enough to say much else beyond an obvious morale that violence simply begets violence. Big Bad Wolves ultimately muddles any message about the perversity of violence, though, by making the violence itself the main attraction. Every laugh and every beat is punctuated by brutal carnage. The derisively entertaining film is much a celebration of gratuitous violence as it is a satire of it.

Big Bad Wolves screens in Ottawa at The Mayfair until January 23rd.