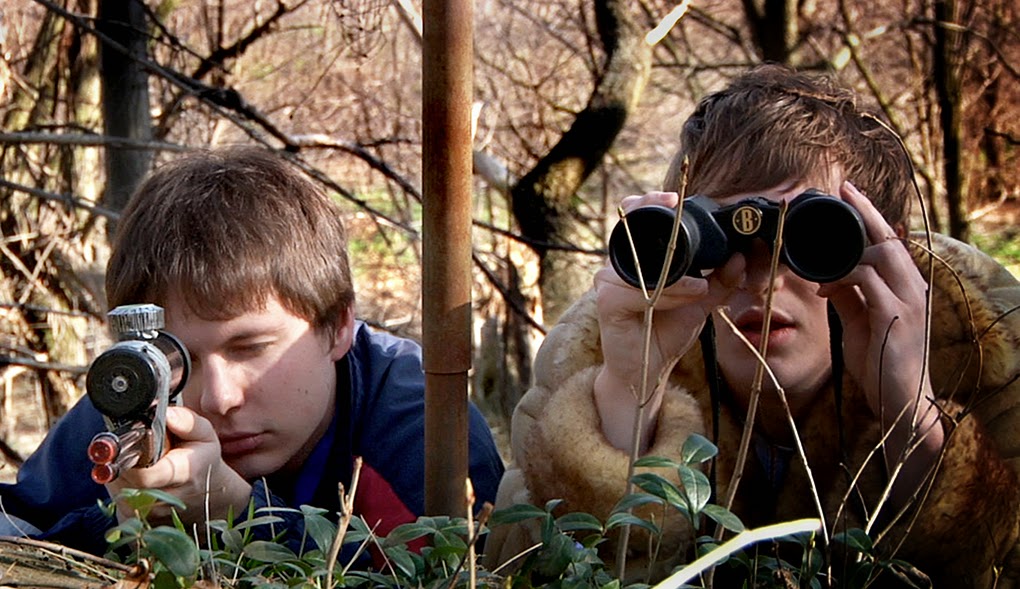 What are the most tired tales and conventions when it comes to teen-set cinema? I might have said bullying, school shootings, and found footage films, but then I saw The Dirties. The Dirties, Matt Johnson’s flat-out brilliant feature debut, shows that everything old can be new again in the conversational medium of cinema.


The Dirties is a film wholly in a dialogue with the world of movies. It’s a film geek’s dream, a product of a mind reared on an education of professors like Quentin Tarantino and other cinephile contemporaries. The Dirties, though, isn’t so much a catalogue of cinematic citations as it is a story of a teen that sees the world through the frame of a film image. Cinema is the mode for conversation in The Dirties and what this film has to say couldn’t be more original or more exciting. The Dirties feels like nothing that the cinema has ever seen before even though most of its action is drawn from other films.

The found footage angle for The Dirties comes into play immediately when an opening title card informs the audience that the subsequent footage has not been edited or altered out of respect for the victims. This ominous bit of foreshadowing let us know that the tale of The Dirties certainly won’t end well. The Dirties keeps the audience guessing, though, as the mode of presentation constantly re-contextualizes the conversation. Friends Matt (Matt Johnson) and Owen (Owen Williams) are in the midst of shooting a film called “The Dirties” as a high school assignment. “The Dirties”—the film within the film—is, like the film in which it appears: a mockumentary style drama about the gang of bullies called The Dirties who torment kids like Matt and Owen on a daily basis. The Dirties seems like a film within a film itself, though, as scenes of Matt and Owen making their Meta-movie are glimpsed through windows, odd angles, and blocked views of a hand-held camera trying to get a clearer view. The cinematography by Jared Raab adds an exciting, unique energy to The Dirties as it makes the archival/found footage aspect of the film something both mysterious and urgent.

Matt and Owen’s project partly reveals account of bullying first hand. Candid moments with hidden cameras—the film’s production team is never seen, although they’re frequently referred to—capture The Dirties picking on their peers for no good reason. Other snippets in the boys’ classes, for example, show the mundane elements of peer pressure and group bullying that happen on a daily basis under the noses of teachers, guardians, and adults. The Dirties realistically shows the snowball effect of bullying: kids in high school join the fun and pick on others in a kind of mob mentality. Maybe they just don’t want to be The Dirties’ next target.

Joining in, however, creates targets for “The Dirties.” Matt decides to let the project evolve into an Inglourious Basterds like fantasy in which the filmmakers decide to write history anew via the cinema. This is where the film gets really interesting.

Matt and Owen devise a school shooting and decide that they will open fire in the hallways, yet make it known that only The Dirties are the targets. (The fact that they’re also shooting the school with a camera is a nice subtle play on the film’s self-reflexivity.) The strange thing is that their teacher (Jay McCarrol) has already advised them that they must re-edit “The Dirties” and tone down the violence. They will therefore kill The Dirties in real life, but capture the whole thing on film. The realism of the action somehow desensitizes the boys (Matt especially) to their actions. Violence is (sort of) an act without consequence. It’s a style or a form of artistic expression.

The Dirties, though, goes far beyond your typical art-imitating life cliché in which magic bullet theories fly in all directions and say that violent images lead to violent acts in real life. Rather than use the found footage format to try and pass off the realism as a kind of half-assed authenticity to validate the low-budgeting filmmaking (as is the norm too often with this kind of film), The Dirties uses the aesthetic within the film’s larger mockumentary style. There’s no pretense for realism for a film so chock full of film geek references. It might look like an image ripped from life, but Matt and Owen spend so much time quoting popular cinema and making movies that one can never forget that one is watching a film.

That, however, is the point. There are so many layers to The Dirties that one never knows for sure where one film ends and the other begins. “The Dirties” seems to be about a film within a film, so the boys could be doing a commentary within a commentary as they document themselves either dramatizing a school shooting or shooting up the halls for real.

Johnson and Wilson give excellent performances as the pair of misfit movie geeks. Matt and Owen are always acting, performing their roles in “The Dirties” by pantomiming and mimicking famous lines and scenes from other movies. The actors, on one level, are simply having fun offering send-ups to popular culture—the “Bane voice”, for example, is one wholly convincing reference that makes The Dirties look like a Candid Camera excerpt of everyday high buffoonery. There’s something else going on with these performances, though, that is blazingly new. They have a clear aspect of self-awareness since Matt and Owen know that they’re simply making a movie; however, Matt has an especially theatrical authenticity (if such a thing exists) to his way of carrying about that shows how much film can be a way of making sense of the world both as an escape and as a reality.

The film’s indebtedness to film culture and cinephilia voices something urgent that Matt and Owen do not. By constantly reframing the film within the film by talking to the camera, offering direction, or revisiting a scene in Final Cut after it has seemingly played out in reality, Matt and Owen’s project is a startling thesis on the disparity between violence in film and violence in real life. Bullying in the cinema amounts to little more than a showdown between a protagonist and a villain, while bullying in real life brings real victims and consequences; alternatively, the man with the movie camera could be the real bad guy. The original cut of “The Dirties” seems cartoonishly violent while the revised mockumentary version feels sociopathic in its conception that bullies are remorseless unfeeling Banes that should be picked off one by one. The film is a darkly funny black comedy on one hand and an unnervingly realistic slice of life on the other.

The Dirties blurs the line between film and reality so deftly that film becomes a new reality. As, for example, Matt and Owen use film geek references as an escape from the hell of high school, their life preserver fantasies and re-enactments become fuel for social scorn. A sequence of Matt singing “Malkovich, Malkovich” in homage to Spike Jonze’s Being John Malkovich might not be the best choice for a student trying to avoid the bullies’ taunts, but a musical cue from Being John Malkovich then guides a subsequent scene in which Matt deals with his humiliation. His life is a movie.