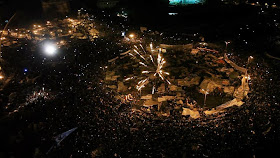 “As long as there is a camera, the revolution will continue,” says Ahmed Hassan, the chief revolutionary through whom the audience sees the citizen revolution in Jehane Noujaim’s documentary The Square. The Square, which received an Oscar nomination for Best Documentary Feature after nabbing the People’s Choice Award for Documentary at last year’s Toronto International Film Festival, is documentary filmmaking in top form. Ahmed champions the importance of the camera because he and his fellow revolutionaries including actor Khalid Abdalla of The Kite Runner fame, know that it is up to the citizens fighting for change to tell the story. The revolution sees the ousting of both Egyptian President Hosni Murubak and his successor Mohamed Morsi, but the citizens at the front lines keep a diary of the events as they unfold so that those responsible can be held accountable when order is restored. The Square is digital democracy at its finest.


The film’s activist stance is matched by its compelling, character-driven pull and its involving thrust into the front lines of the story. The film lets the citizens at the thick of the revolutionary occupation of Tahrir Square in Cairo, Egypt in 2011 tell the story from a perspective that was largely glossed over in media coverage of this notable chapter of contemporary history. The Square thus largely succeeds as a piece of cinematic democracy as it provides first-hand accounts of the violence and aggressive tactics that were enforced upon civilians to curb their protest.

The Square covers the events adequately within the frame of 108 minutes. (This engrossing film moves quickly.) Noujaim grants the story enough context by letting the revolutionaries speak to their cause, rather than by relying upon archival footage and the like to create a mere factual summary. The Square is more a story about creating history than it is an account of it.

Some images of The Square are appropriately blunt and harrowing. Noujaim, however, carefully balances the footage and honours both the fallen revolutionaries and those continuing the fight. Footage of peaceful protests is matched with images of riotous violence. News excerpts show Egyptian politicians legitimizing the violence and saying that the military simply responded with necessary force, but the eyewitnesses’ footage tells a different story. The Square is a product of how digital filmmaking has revolutionized documentary form, for it essentially allows any willing participant in the revolution at Tahrir Square to be cinematographer. The camera, in turn, is an agent of democracy and activism itself, for it gives the revolutionaries a voice with a global reach. The Square shows the revolutionaries countering narratives of the mythmaking media with first hand footage of the events in the square.

The intermingling of the personal and the political also allows The Square to explore the complexly interconnected relationship between religion and state in Egypt, as the account notes how the revolutionaries’ struggled clashed with that of the Muslim Brotherhood, especially when Morsi was elected into power following Murubak’s departure. The film includes Magdy Abomazen, a revolutionary and devotee of the Muslim Brotherhood, as one of its chief witnesses to history. Magdy, however, changes sides as the revolution progresses and takes on a religious element. The question of religion raises levels of sensitivity, yet The Square carefully elides confrontation with religious values themselves; rather, Noujaim observes how religion complicates and obfuscates matters as lines are drawn between allies and fundamentalism warps the revolution in the eye of the media. The participatory nature of The Square grants it objectivity as many contributors have their own voice and point of view from behind the camera.

The film is very much a worthy companion piece to last year’s exemplary activist doc We Are Wisconsin (one of my picks for the best films of 2012), which chronicled the occupation of the Capitol Building of Madison, Wisconsin in the face of Governor Scott Walker’s suggested reform. Like Wisconsin, The Square has the energy and conviction of a film created in the throes of history as it happens. It’s a collaborative call for democratic freedom and a collective fight for human rights. It’s a film of the moment made in the moment, and its relevance couldn’t be felt more clearly.

The Square is harrowing and convincing thanks not only to the authenticity of the images captured by the revolutionaries, but also for the conviction and perseverance that the subjects bring to their struggle. The film follows the revolutionaries through two years of revolution and it leaves the revolution not far from where it began. Little has changed, as Ahmed and his peers note that corruption and violence is more prevalent than ever and that the revolution simply replaced one crooked President with another.

There is, however, a note of optimism that rings throughout the film. It’s apparent in the evocative graffiti and street art that one glimpses throughout the film. The images appear with more colours and more passion, and more importantly, they appear in greater frequency as the revolution evolves. The art, matched with the fervent voices that narrate the story, show a spirit that cannot be broken. The Square shows that the revolution is ongoing and it invites more voices to join the fight.


The Square is now available on Netflix and in select theatres.