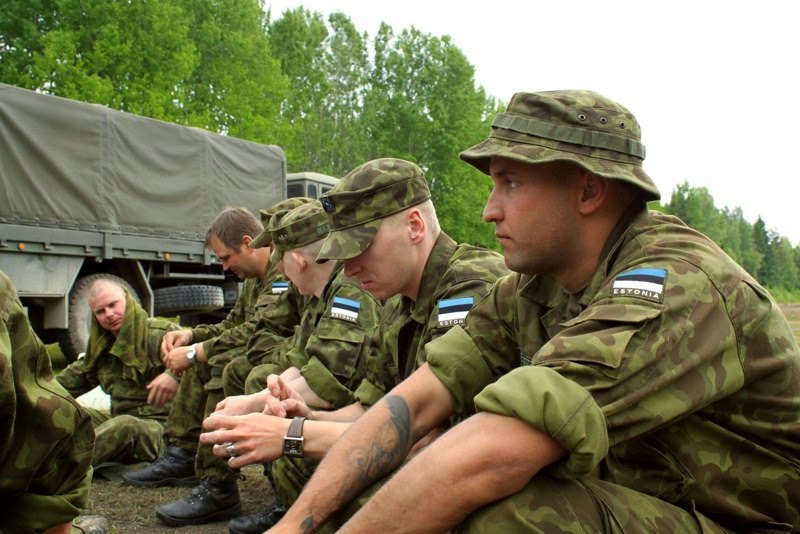 “The all-devouring passion of a soldier is the battle, the thrill of challenging fate, the triumph of becoming one's own destiny,” reads a quote from German writer/philosopher Ernst Jünger that serves as an epigraph for Leeni Linna’s documentary Blood Type (Veregrupp). Blood Type explores with remarkable objectivity the facets of a soldier’s psychology that Jünger notes. Blood Type, which opens the Canadian Film Institute’s fourth annual Bright Nights Baltic-Nordic Film Festival on Saturday, offers a portrait that Ottawa viewers might not expect from this corner of Europe during the Winterlude-set festival.


Blood Type takes viewers to the arid battlefields of Afghanistan as Linna follows the men of ESTCOY-13 (Estonian Company 13) to the front lines of war. Blood Type looks at neither the futility nor the valour of war and instead zeroes in on the men waging the war itself. The stories of the men of ESTCOY-13 build a sense of fraternity. These men are soldiers who have given considerably, but they’re also fathers, sons, and brothers, so their families and friends back home in Estonia have given as much in turn.

Blood Type avoids debating the case for the War in Afghanistan—the men of ESTCOY-13 never really say why they’re in the Middle East—and it instead meditates on the mentality of the men in the unit. Linna accompanies them into battle, observes them on the bases, and interviews them intimately to build a clear portrait of the “all-devouring passion” that Jünger says defines a soldier. The soldiers all vary in explaining why they fight, but there’s an acute awareness between the men that Blood Type captures while coagulating their stories.

One thread, for example, sees a soldier named Steve adapt to life with a prosthetic leg after an explosion robbed him of one of his limbs. Blood Type takes the audience to a rehab centre in the UK where the cameras, lensed by DP’s Mihkel Soe and Kullar Viimne, observe countless soldiers moving through the halls on crutches or in wheelchairs, while Steve and others undergo physiotherapy to regain the strength required to go back and fight. This sequence is neither sentimental nor elegiac as it looks at the lasting impact the war has had on these soldiers. Linna’s approach is intimate, yet objective and matter of fact.

Blood Type intertwines the struggle nicely with one thread that intersperses interviews with Jaan, one of the more experience men of ESTCOY-13, and those of his wife, Karman. Jaan clearly feels a strong connection with the men of his company, as he notes that, “the whole company is wounded when a single soldier is wounded.” Karman echoes the sentiment back home in Estonia, for she spends the duration of her husband’s assignment reading every news story with fear and anticipation. The distance between Jaan in Estonia and Karman in Afghanistan illustrates the challenges and personal costs that coincide with enlisting in the war. One particularly poignant scene sees Jaan chat with his wife and their young daughter via Skype, and the fuzzy, awkward communication underscores the psychological distance and isolation in which both a soldier and his family may live. Karman knows that her husband challenges fate with each trip into battle; however, while she wishes that every return home would be his last, she knows that the thrill of being the maker of one’s own destiny is part of what drives Jaan to return to Afghanistan.

The film connects the interviews with the soldiers using a provocative point-of-view device as the camera assesses the Afghan terrain from a soldier’s viewpoint. This motif begins rather ordinarily: a camera sits fixed upon the helmet or shoulders of a soldier as the men walk to their next location. The shot situates the viewer within the company. The theme builds the soldiers’ psychology, though, when the men enter an Afghan village and the camera observes the fight from a soldier’s vantage point. All puddles are checked for tip wires and IEDs; children asking for candies and chocolate are both a cute welcoming party and a potential threat (one soldier recounts an incident where kids approached them for candy and proceeded to throw rocks at their faces); countless villagers look at the camera with a sceptical eye. This sequence puts one on edge. Walking through the village and entering abandoned homes, one doesn’t feel entirely welcome. There’s a risk at every turn, as the camera peers around each corner before taking a cautious step.

The sequence that most fully invests the audience into the psychology of a soldier in battle, though, is a riveting centrepiece in which the soldiers are on the receiving end of gunfire. In the film’s most suspenseful and cinematic sequence, the point of view camera falls to the ground as the soldiers take fire. As the soldier from whose vantage point Blood Type engages with the incident sees a soldier, Jimmy, take a hit, one feels the horrifying rush being on the receiving end of gunfire. The disorienting camera creates a sense of chaos and confusion as the soldier calls out to his fallen peers while he takes cover and fires at the enemy in the distance. The limited range of this point of view camera restricts the field of vision so that the audience has no idea who is firing or from where they are firing. It’s terrifying, but an undeniable adrenaline rush.

A later sequence turns the film back on the way films depict war. A soldier watching Band of Brothers sees Ron Livingston describe war as “the last place for civilized men” as the Spielbergian music underscores the sentiment. A dramatic depiction as good as Band of Brothers, however, doesn’t feel accurate in the context of Blood Type. Linna’s account of the men in ESTCOY-13 shows that war, however costly or brutal, requires civilized, rational soldiers to get the job done with purpose.

The film might best be summed up in the words of the father of a soldier named Rene as the two enjoy a sauna back home in Estonia. (Saunas are a hallmark of civilization for the Estonian soldiers on the frontlines.) The father finds the war pointless, but he can’t argue with a man at war. “Either you’re crazy or that really is your calling,” he says. Modest, object, and reflective, Blood Type is a sincere account of the psychology of men at war.