BNFF Review: 'Into the Dark' 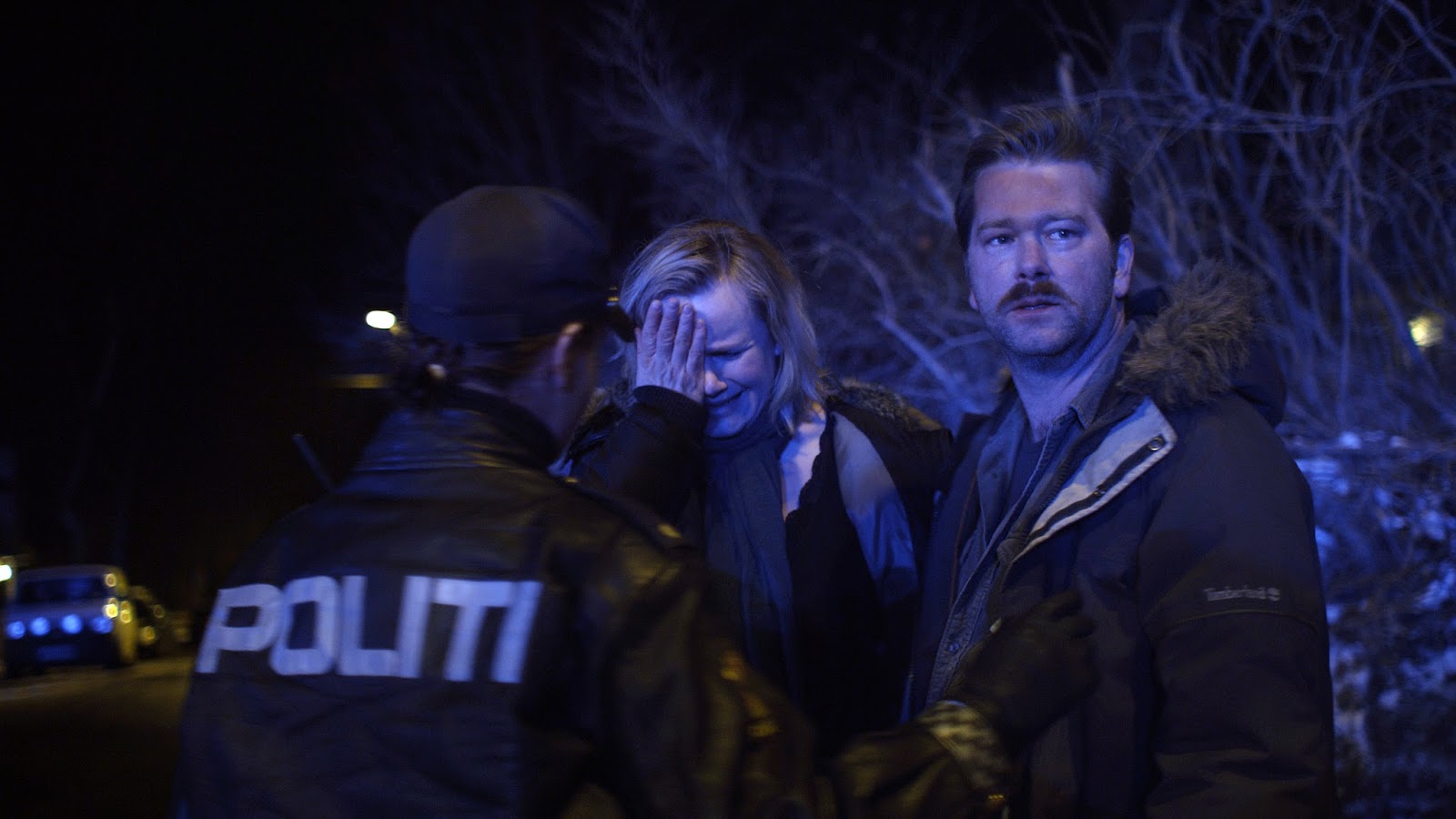 Into the Dark, the Norwegian offering at this year’s Bright Nights Baltic-Nordic Film Festival, is a stark and potent domestic drama about grief and guilt. This film by writer/director Thomas Wangsmo, a graduate of Montreal’s Concordia University making his feature film debut, begins almost imperceptibly as a slow burn thriller. A car accident in a snowy suburb outside Oslo sees Jan (Thorbjørn Harr) collide with Nicolai (Fredrik Frafjord), the son of his neighbours Svein (Fridtjov Såheim) and Sigrun (Laila Goody), as the boy passes through an intersection Jan approaches while driving home that night. As Nicolai lies on the ground with his crumpled bicycle and his parents anxiously await the oncoming ambulance, Jan’s wife, Anita (Ellen Dorrit Petersen), pulls him as side and murmurs, “Don’t tell them about the …” She trails off just as the authorities arrive on the scene.


Anita’s mysterious warning is all but forgotten as Into the Dark follows both families in the aftermath of the accident. Nicolai lies in a coma and his parents are paralyzed with grief. Jan, on the other hand, is torn apart by guilt. As Into the Dark crosscuts from one family to the other, it’s clear that the neighbourly relationship will never be the same.

Into the Dark captures the empty residential area with a cold, austere vision. Mixing dark interiors when the despondent grey emptiness of the streets, Wangsmo strips the neighbourhood of any sense of community or kinship. It feels like a typical suburban area one could wander into in any city and find street upon street of houses filled with people who quietly keep to themselves. Wangsmo casts the ordinary neighbourhood in a new light soon after the accident when Jan decides to go for a jog. A dazzling crane shot by cinematographer Patrik Säfström follows Jan throughout the snow-laden neighbourhood (where nary a neighbour is to be seen) as he blows of steam and marinates in his guilt. The run ends with Jan revisiting the scene of the accident where he picks up Nicolai’s discarded bicycle. He brings it home and stuffs it in the garage as a reminder of his crime.

Both Harr and Såheim offer equally convincing and sensitive performances as the two men converge for the inevitable confrontation to ferret out the truth behind the accident. Svein begins as the more sympathetic character for the audience, as he’s the father of the injured boy and the man in search of reparation and answers. Svein becomes increasingly less rational in his actions as the situation becomes messier, and Såheim isn’t afraid to let the character spiral beyond the audience’s care. (One wrong turn does not deserve another.) Jan, on the other hand, is calm and cool when the film begins, but Harr makes the toll of the character’s guilt visibly clear as he tries to find the best outcome possible both for Svein’s family and for his own. Into the Dark finds a nice symmetry with the performances and leaves one equally conflicted, yet drawn to each party as the disaster culminates with an unexpected climax.

Less compelling, though, is Into the Dark’s dismissal of both female characters into the corner. Petersen and Goody receive little to do as Anita and Sigrun remain peripheral characters to the drama widening the rift between their families. One is cold and dismissive, the other bereaved and demure, but neither receives the arc afforded to her husband. It’s a domestic drama where men are the agents of action and women are along for the ride.

Into the Dark nevertheless builds a realistic and compelling study of how lives can be torn apart in an instant. The decision Jan makes—one that many drivers have probably done more times that they can count—is seemingly inconsequential, as it distracted him for a mere two seconds, or so he rationalizes when Svein confronts him. It’s these fleeting incidents of happenstance and chance, however that make even the coldest, most banal little suburb the place for believable character drive-drama.

Into the Dark screened at the Canadian Film Institute’s Bright Nights Baltic-Nordic Film Festival on Feb. 1.
The rest of the Bright Nights line-up may be seen here. (Check back for more reviews!)