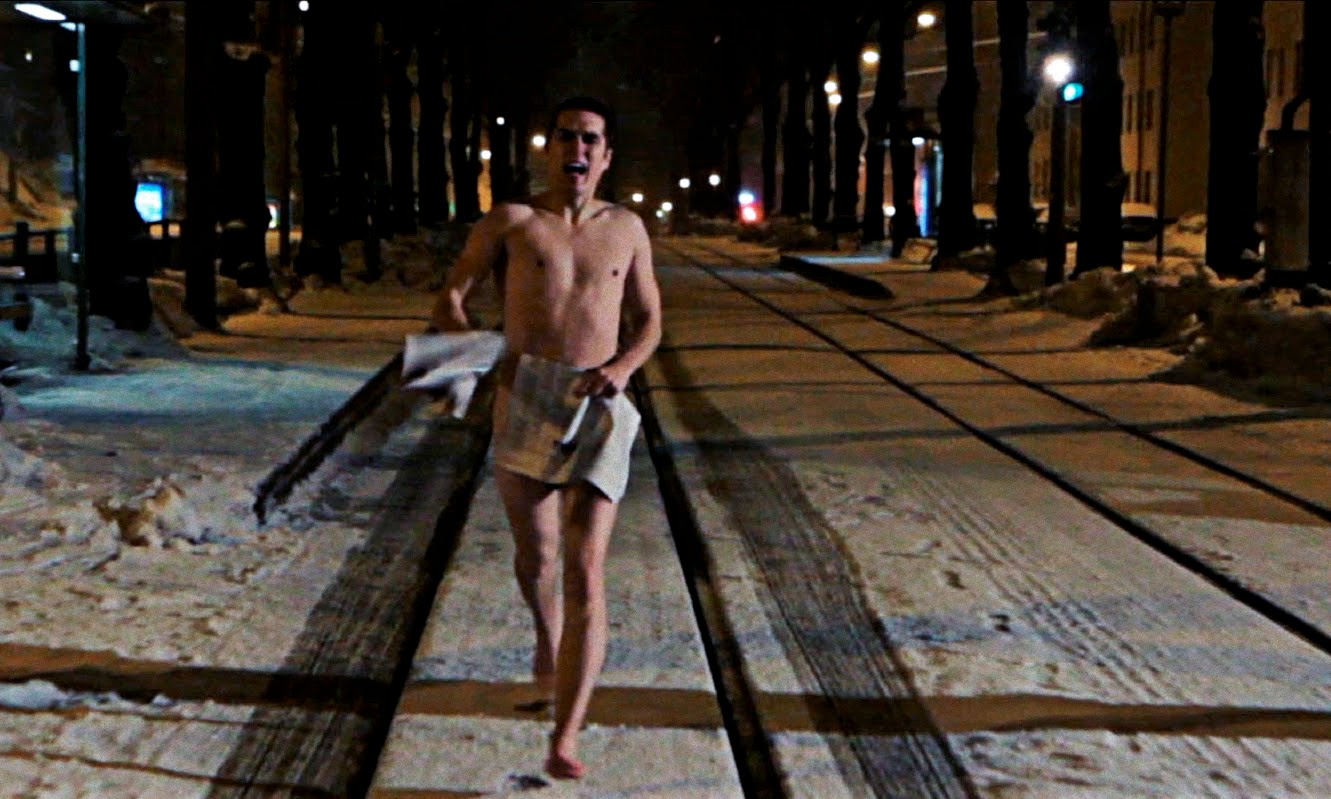 “Things won’t make a home. It has to come from somewhere else,” says Petri’s grandma more than once during their visits that appear throughout Petri Luukkainen’s documentary My Stuff. My Stuff, which screens in Ottawa Wednesday night at the Canadian Film Institute’s Bright Nights Baltic-Nordic Film Festival, sees the young filmmaker go on a Morgan Spurlock-y quest of self-examination. Petri visits his grandmother frequently to seek her age-old wisdom and non-judgemental candor while undergoing an odd system of soul-searching that forms the study of My Stuff. Petri has decided to purge himself of all his material possessions and reclaim one item from storage per day for all three hundred and sixty five days of the year. It’s as extreme and interesting a challenge as it sounds.

Petri’s challenge comes as a response to the emotional vacuum in which he finds himself following a break-up and other personal struggles. His life was filled with things, he says to the camera, but it felt empty. He therefore strips his apartment down past its bare necessities—even the refrigerator, bed, and blinds are removed—to give himself a fresh start. He has not even a single pair of underwear as he streaks buck-naked from his apartment to the storage locker to retrieve his first reward for the first day of filmmaking. Undies, surprisingly enough, aren’t pulled from the locker until, wait for it… the seventeenth day!

Petri’s minimalist challenge is often a surprising one. A viewer might be taken aback by seeing how easily a person gets on without household items that seem essential. Petri’s refrigerator, for example, is easily replaced by a windowsill that can preserve foodstuff in the air of the cold Finnish winter. On the other hand, a few nights of restless sleeping make the return of Petri’s futon a joyous affair. The challenge in My Stuff, unsurprisingly for a premise prompted by a break-up, is often a poignant reminder of the things we take for granted.

An everyday comfort for one person becomes a luxury for another as Petri evolves through a journey of “have and have not”. My Stuff is at its most surprising when Petri’s challenge reveals the social restrictions a person faces in the absence of material things. Petri’s first week in the challenge is one of seclusion, as his nudity obviously prevents him from strutting out and joining his pals at the pub. He doesn’t leave his house except to get an item a day, but even the heavy overcoat he grabs as his first prize, which also doubles as a sleeping bag, pillow and towel, isn’t enough by conventional standards. Going to work is equally challenging, for it takes a few days to amass enough gear to put on a professional appearance.

Another rule of the challenge is that Petri can’t buy anything during the year. He can make do only with the items at his disposal. My Stuff thus shows how much a person can be restricted by a lack of access to resources, as his own transportation throughout the city, as are he means of work, hygiene, and health. Things—objects—rule mobility and personal growth. Petri never addresses directly the elements of social determinism connoted in the materialist bent of contemporary culture—especially western culture—but one can observe from his own seclusion and restlessness how much people are slaves to stuff.

My Stuff also finds a middle ground in the collection of material things by noting a midpoint where Petri’s picks from the storage locker go from necessities to niceties. “I need about a hundred things,” he says, although the remaining days of the challenge also reveal how a person might not “need” something like a painting or a record album, but how such things do afford some mental balance and relief. My Stuff speaks to people of Petri’s generation who have been reared on a culture of consumerism, but now find themselves in a changing social landscape where there seems to be a tension between a society that places an increasing value on stuff—for example, it’s no longer enough to have a computer: one also needs a laptop, a tablet, an iPod, and a smart phone—and the increasingly reality that young adults are expected to be on top of consumer culture in a dwindling economy that offers them fewer jobs and opportunities that actually afford the means of providing such stuff. There is a freedom felt in My Stuff when Petri putters about his apartment to the film’s jazzy score. He isn’t weighed down by all his needless baggage, but he also finds a learning curve that teaches viewers the practical element of needing enough to get by.

“What you own isn’t a measure of your happiness,” notes Petri’s sensible grandma during another of their visits. She observes Petri’s arc throughout the journey, as his attempt to fill his emptiness with things hardly brings him to his desired happy place. Budding personal relationships, or the times spent with friends and family, are far more valuable, as Petri’s storyline with his grandmother, which is arguably the film’s greatest strength, puts him on a parallel challenge of decluttering her life when her things are no longer needed.

Having fewer things in one’s life is also a social affair. This element of the challenge essentially forms the crux of Petri’s argument in My Stuff. Without undies, pants, or credit cards, Petri relies on his friends and family to pitch in and participate in the project. Sharing stuff is a social affair just as much as it is a practical one: borrowing tools and whatnot allows for interaction, while overloading with things can make a person a desk fixture, rather than a social butterfly unencumbered by baggage. This smart, humorous documentary is a relatable lesson on the need to purge oneself from the ideology of materialism and see that the true hallmarks of success aren’t the stuff we can just store away. A ticket to this fun, jazzy, and insightful doc should be the one bit of “stuff” you enjoy all day.

My Stuff screens at the Bright Nights Baltic-Nordic Film Wednesday, Feb 5 at 9:00pm at Library and Archives Canada.
Click here for the full festival line-up and please visit www.cfi-icf.ca for more information.