Catching Up on Oscar Nominees with 'Cutie and the Boxer' and 'Jackass: Bad Grandpa'

I watched two more Oscar nominees last night in an effort to tick off every name on my ballot (although I draw the line at another Hobbit movie). The films couldn’t have made for a more random bill: Cutie and the Boxer and Jackass Presents: Bad Grandpa. The latter film marks the last straw in my aim to be an Oscar completist.


Cutie and the Boxer
(USA, 82 min.)
Written and directed by Zachary Heinzerling

Cutie and the Boxer is a cute and enjoyable Oscar nominee for Best Documentary Feature. It’s the touching and often funny story of Ushio and Noriko Shinohara, a husband and wife pair of Japanese-American artists living in New York City. Cutie and the Boxer begins as if the audience is in store for a glimpse into the artistic process of Ushio (“The Boxer”), for the first act of the film concentrates primarily on his work and story.

A pop artist who gained some fame, but sold little work, decades ago, Ushio is the more famous and celebrated artist of the pair. His work, as Cutie and the Boxer shows him create a piece in its entirety, usually consists of a large wall-length canvas that he attacks with the brushes of his two fists. Ushio ties some towels to a pair of boxing gloves, dips them in paint, and moves along the canvas, hitting it with a rat-a-tat-tat until a line of eye-level blotches drips down the canvas.

Ushio might seem like an eccentric genius when the film begins, but his work feels increasingly derivative as the film progresses. There’s little insight into his artistic process. There isn’t any study of technique because the technique per se is minimal. None of his paintings are filled with story and meaning: they’re interesting works that capture a sense of fury and motion on the canvas, yet every one essentially looks the same even though the colours of the paints and canvasses change throughout the years. The work is done so quickly and furiously—most of his paintings takes about two minutes to create—so the portrait of his creative process ultimately shows the emptiness and the superficiality of his pseudo pop art. Any attempt to explain or intellectualize it sounds like bullshit. Ushio’s work is aesthetically pleasing, but one can see why the couple struggles.

Cutie and the Boxer, however, finds a better window into the creative process in Noriko. Noriko is embarking on her greatest and possibly most personal work with a series of cartoon-like portraits about her alter ego Cutie and her struggle to find her own artistic voice living in the shadow of her celebrated, alcoholic, and much older husband Bullie. Cutie and the Boxer takes imaginative flights with Cutie as she ventures into 1970s New York after arriving from Japan. These striking animated sequences suggest that the film ultimately favours Noriko’s half of the story, for Ushio’s work is always viewed at a distance through the low-res portrait of the camera. Ushio’s art exists in the present tense while Noriko’s is a fusion of past, present, and future. The two prepare for a joint exhibition and while Ushio struggles to contain an ugly mess of colours splattered and punched around a wayward canvas, Noriko fills four wall to wall panels with her pony-tailed heroine and her push-and-pull love for Bullie. One work is met with polite appreciation while the other sees a buzz of excitement.

The two stories show how one artist can make a career out of consistency while another lays low and remains unsung until her life and work culminate into a peak project. Cutie and the Boxer is an intimate and amusing glimpse into the creative process as Heinzerling chronicles two wildly different approaches to aesthetics and inspiration. These two artists couldn’t be less alike, yet they’re a yin and yang harmony that feeds the other’s creative process and gives each partner balance. The film doesn’t tread below the surface as often as it could, as it often remains slight and respectful, but Cutie and the Boxer nevertheless shows how opposites attract. 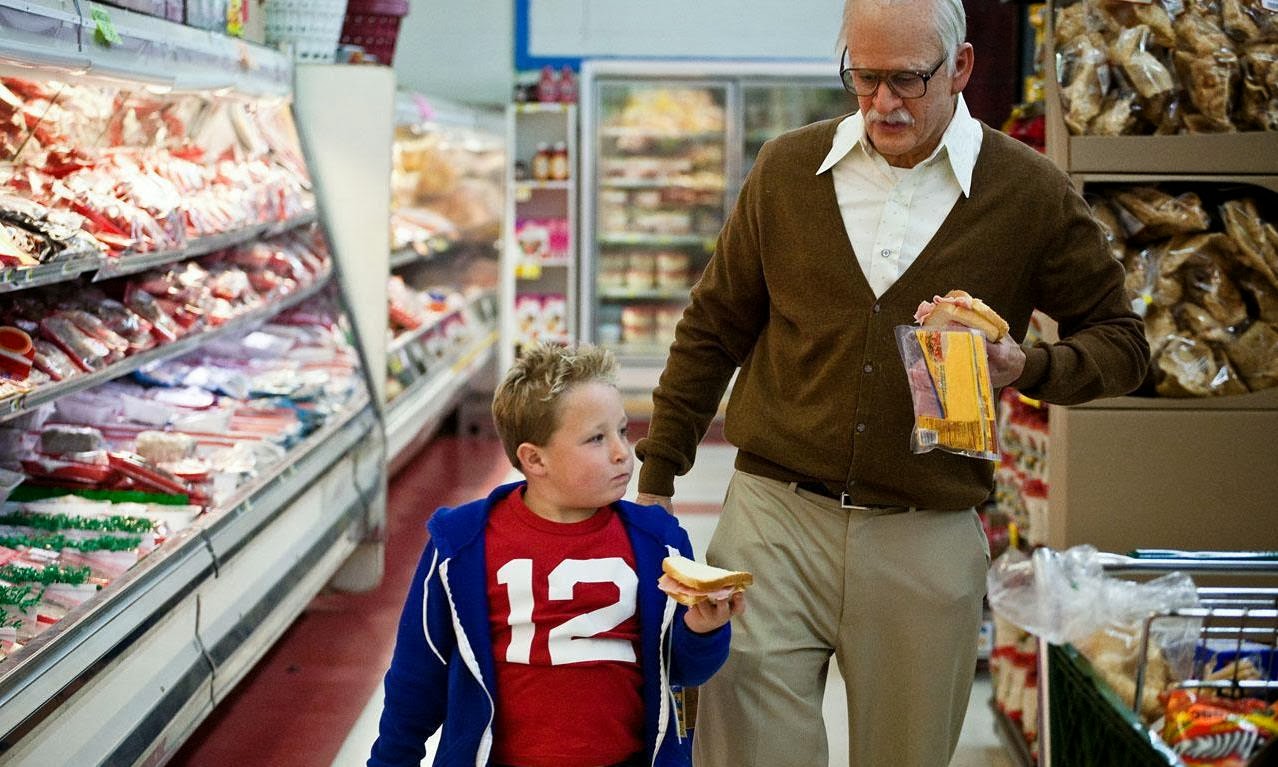 Even an Oscar nomination can’t prevent Jackass from being the lowest point in popular culture. The unfunny crew beats the dead horse of its one-note premise yet again as Johnny Knoxville undergoes a full makeover to transform into an 86-year-old dirty old man and wreak havoc on the unsuspecting masses. Enough is enough with this self-serving excuse for entertainment.

Bad Grandpa is more of the same as Knoxville and company suggest that a camera and a punch line give them the right to have fun at the expense of others. Bad Grandpa is Jackass in its most exploitative form, as it continues to put (allegedly) unsuspecting people as the butt of a joke. This time, though, they nearly give a woman a heart attack (we’re supposed to laugh at her when Knoxville makes her the agent of a folding bed catastrophe); they ask a pair of movers to participate in the potentially traumatic disposal of a corpse; andthey  intrude upon a bunch of randy women at a strip club as Knoxville uses the geriatric to fulfill some kind of screwed up Mandingo fantasy. This is a sexist, racist, and childish waste of time and money. It’s offensive and it just isn’t funny.

Bad Grandpa, moreover, shows how the Jackass team never aspires to any higher meaning beyond its self-involved juvenile behaviour. There’s no point to the hijinks. There is nothing to say about American culture or the working class, often African American, people whom the bad grandpa preys upon for low blows. Even the worst episode of “Candid Camera” or “America’s Funniest Home Videos” has greater entertainment value and potential for social commentary (by which I mean none) than Bad Grandpa does.

Oh, yes, and the makeup is decent, but the dangling, saggy, prosthetic old-man balls aren’t any funnier and more convincing than the fake nuts on Hugh Jackman’s neck in Movie 43.