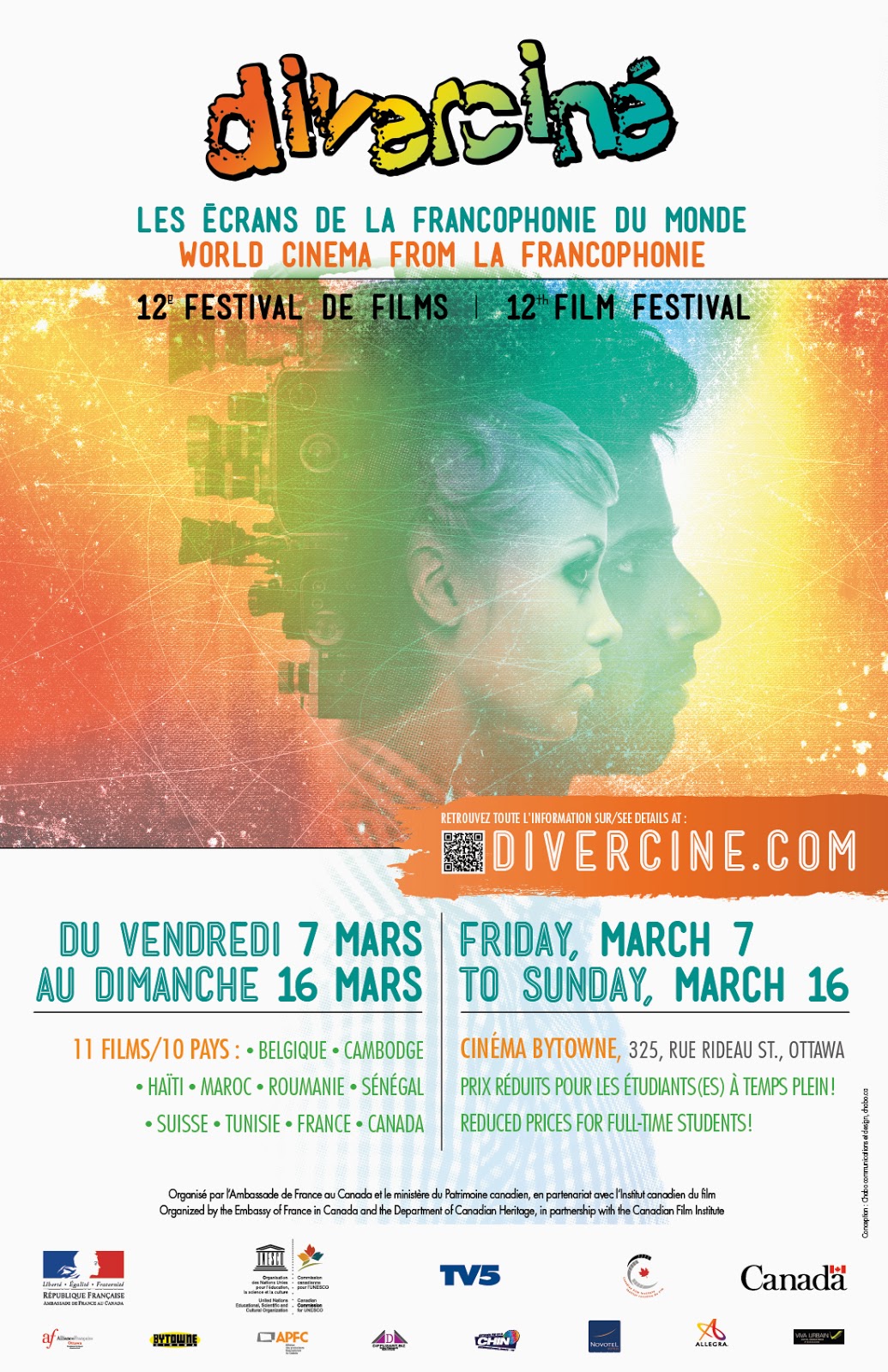 
It was an exciting morning in the capital, for I went to the launch of the 12th annual DiverCiné, which runs in Ottawa March 7-16. My French, as readers may see from the paragraph above, isn’t the best. Therefore, as I settled in for the announcements, I found myself in a funny episode like the one featuring Carol (Margo Martindale) in the “14e Arrondissement” segment by Alexander Payne in Paris, je t’aime (see above). Carol and I aren’t the best at French, although her accent’s much better than mine is, but we are both in good spirits to enjoy la cinéma de la Francophonie chez DiverCiné!
Anglophone film buffs like me take for granted the pleasure of seeing a film in one’s own language. In bilingual Ottawa, though, Francophone cinephiles often rely on the few independent theatres and film festivals in the city to see films en français. Luckily, though, DiverCiné brings to the National Capital a dozen days of Francophone world cinema. DiverCiné, which is organized by the Embassy of France in Canada and the Department of Canadian Heritage in partnership with the Canadian Film Institute and The ByTowne Cinema, two of Ottawa’s greatest supporters of Francophone cinema, offers a diverse selection of films from Francophone nations across the globe. This year’s DiverCiné marks the festival’s third year in collaboration with The ByTowne.
Opening remarks by Erika Denis from the French Embassy, Cultural Services, and Tom McSorley, Executive Director of the CFI, noted that the twelfth DiverCiné offers a truly diverse program that spotlights Canadian films and international films alike. The diversity of this year’s DiverCiné, which appropriately gets its name from la diversité cinématographique, extends to the assortment of dramatic, animated, documentary, and short films included in the festival. The line-up also includes an Oscar nominee, a Canadian Screen Awards frontrunner, and a handful of favorites from festivals around the world. DiverCiné 2014 also includes a panel discussion that invites festivalgoers to debate the “mission” of contemporary cinema with directors and special guests. The efficient presser ended with the launch of the festival’s official trailer, made by CFI programmer Jerrett Zaroski, which highlights the exciting range of films in the DiverCiné line-up this year.

Programming highlights for DiverCiné – World Cinema from La Francophonie include:

Synopsis: Summer in Tangiers. After the death of their father, a family of women gets together for 3 days in the family home to grieve and remember together, as is the Muslim custom. Goodbye to beaches and bikinis, it is now the time to wear djellabas, to gather everyone together and to deck the house out in funeral attire. The house is full of activity. Things reach a crescendo when Sofia, the youngest daughter, returns home. An actor who only plays terrorist roles in American television series, she arrives from New York after several years absence. Her return becomes the means to settle scores with her sisters and to overturn the order established by the defunct patriarch. Between laughter and tears, a collective hysteria allows all of the women to discover their true selves.
Notes: DiverCiné’s opening night film boasts an international all-star cast that includes Morjana Alaoui (Martyrs), Nadine Loubaki (Where Do We Go Now?), Hiam Abbas (The Visitor), Lubna Azabal (Incendies), and Omar Sharif. This sophomore feature by Laïla Marrakchi was a hit at last year’s Toronto International Film Festival.

Synopsis: Gaby (Gabriel Arcand) has a farm where he raises lambs, “la Ferme Gagnon and Sons”. But he doesn’t have any sons, just the two daughters he has raised like princesses, who live far away in the big city. One day, the older daughter asks for money to save her house, which she fears will be lost in the midst of an impending separation. Gaby has an extreme sense of paternal duty and he decides to help his little girl by selling the farm. He sells everything - the house, his herd, the ancestral land - and moves into a small apartment in the village down the road.
Notes: A festival favourite at Cannes and Toronto, Le démantèlement is nominated for five Canadian Screen Awards including Best Picture, Best Director, and Best Actor.

Synopsis: Hidden Beauties is the poignant tale of two young Tunisian women striving to achieve the same level of emancipation enjoyed by the male population of their country – even as their fellow citizens fight for freedom. Surrounded by the turmoil of revolution, Zaineb and Aisha are inspired to change the course of their own lives. In a male-dominated society, that is easier said than done, but they are unrelenting in their pursuit of equality. Brahim, Zaineb’s fiancé, wants his future wife to put on the Islamic veil; and Hamza, Zaineb’s brother and Aisha’s love interest, disapproves of the women’s lifestyle and choices. Aisha, in turn, assumes full responsibility of looking after her family after the death of her parents. Under pressure to remove her veil from her boss at work, she struggles to balance her beliefs with the need for income. As one woman resists putting on the veil and another resists taking it off, the two friends stand together in their fight. Their course resonates as a metaphor for all the uncertainties in the country’s political future.

Synopsis: The story of one man’s family’s experience of the Pol Pot dictatorship in Cambodia, the film is a brilliantly original evocation (with archival footage and clay models) of that which is gone, that which is absent. Says director Rithy Panh, “For many years, I have been looking for the missing picture: a photograph taken between 1975 and 1979 by the Khmer Rouge when they ruled over Cambodia...On its own, of course, an image cannot prove mass murder, but it gives us cause for thought, prompts us to meditate, to record History. I searched for it vainly in the archives, in old papers, in the country villages of Cambodia. Today I know: this image must be missing. I was not really looking for it; would it not be obscene and insignificant? So I created it. What I give you today is neither the picture nor the search for a unique image, but the picture of a quest: the quest that cinema allows.” Stunning.
Notes: After winning the top prize in the Un Certain Regard section at the 2013 Cannes Film Festival, The Missing Picture is nominated for Best Foreign Language Film at this year’s Academy Awards.

Synopsis: This is the story of a voyage of initiation in which three young Inuit go in search of a promised land, hoping to save their clan from famine. It is also the story of a fight to the finish between two shamans, the young Markussi and the aged Killiq, who feels that his power is threatened.
-Notes: If last year’s family screening of Ernest and Célestine was a festival highlight, then The Legend of Sarila is a must-see at DiverCiné. Fans of Canadian cinema will also want to see this landmark production, as The Legend of Sarila is Canada’s first feature-length 3D animated stereoscopic film. (Read the review here.)