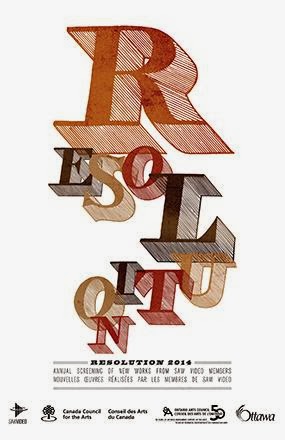 Just a head’s up for local film fans that Ottawa’s SAW Video will be holding Resolution 2014 screening tomorrow at the ByTowne. Resolution is an annual showcase of new members’ work. Resolution 2014 offers a mix of drama and documentary, narrative and experimental cinema, and both live action and animated films. Tickets are just $5 and the event includes a post-screening reception and Q&A at Shopify (126 York St.). I'm already booked for (covers mouth) Vampire Academy, but please head on over to The ByTowne for 6:45pm at support local film!

From SAW: SAW Video’s members are a vital part of Ottawa/Gatineau’s media arts community and the driving force of our centre. Join us at the ByTowne Cinema as we celebrate their talent with the 2014 edition of RESOLUTION, our annual screening of new members’ work. This eclectic event showcases Ottawa’s vibrant filmmaking scene with something for everyone, including drama, documentary, animation and experimental video art.


Please visit for SAW’s website for film synopses and for more information on the screening.