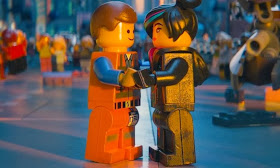 Tie-in merchandise is usually just one building block of the Hollywood machine, but the fantastically entertaining The Lego Movie shows that an entire feature-length film can be built upon glorified product placement. The Lego Movie builds a case brick by brick that the product that shares its name and trademark is indeed the best darn toy ever made. Every piece of the film is a Lego block that creates an entire world of fanciful escapism. Kids will marvel at the all wonders they can build with Lego, while the parents accompanying them will note how Lego is one toy that will never grow old. If The Lego Movie is just a 100-minute ad for the iconic Danish toy, then it’s the most brilliant marketing ploy since 99 cents.


It seems too dismissive, though, to chalk up The Lego Movie as simply another example of Hollywood’s endless bastardization of the cinema. Filmmaking, after all, is a business just as much as it is an art. The Lego Movie makes no attempt to hide its pride in its product—heck, the entire film is made out of Lego—and the thrill of the film actually lies in watching the sheer inventiveness it takes to create a feature film out of nothing other than some interlocking blocks.

One can hardly begin to unravel the convoluted plot, but the Lego men and women are doomed by an evil ruler named President Business (Will Ferrell), who has an evil plan to unleash a superweapon called the Kragle upon Legoland. A wily old wizard named Viruvius (a hilarious show-stealing Morgan Freeman) prophesizes that a person called the Special will find, as he calls it, the “Piece of Resistance” that will thwart the plan. The Special is a hard man to find in Legoland, which seems like a surprisingly homogenous mass even though it’s engineered out of billions of tiny little bricks. President Business (and his evil alter-ego Lord Business) have turned Legoland into a brainwash mass of happy-go-lucky people content to push the status quo as they drink overpriced coffees, watch mindless sitcoms, and enjoy the daily commute like slugs driving back and forth from Barrhaven. It’s all set to the tune of the hilariously ironic anthem “Everything is Awesome,” performed by Canadian sister duo Tegan and Sara with The Lonely Island, which could easily be a number one hit on the radio stations of parents everywhere.

Content with the toe-tapping funk of “Everything is Awesome” and knowing every word is the hero of The Lego Movie, an ultra-ordinary Lego man named Emmett (Will Arnett). Emmett sports the bland smiley face of the classic Lego man, so he seems like nothing unique among all the hip special edition characters of Legoland. Emmett is content to follow the instructions of every Lego set to the tune of “Everything is Awesome” like most kids do when they open their first box of Lego. Following the instructions becomes boring after a while, though, and Emmett discovers the thrill of living outside the box, so to speak, as he finds himself on a quest to thwart Lord Business and the evil Bad Cop (Liam Neeson) with the help of a spunky rebel named Lucy (Elizabeth Banks) and the guidance of wise old Viruvius.

The design of The Lego Movie becomes more extravagant and imaginative as Emmett is called upon to harness the power of a Master Builder and think of creative wars to thwart the destructive design of Lord Business. It’s a genius move by writer/directors Phil Lord and Christopher Miller to shift the magic away from the product itself and set the crux of the film on the creativity and freedom of expression that lies in such a unique toy. A latter-act turn even shows Lego as a timeless, ageless product thanks to its ability to be shared and enjoyed between generations. It’s a toy that never goes out of fashion, since it offers endless permutations for the creative wonders of the mind.

The result is a dazzling and hugely entertaining conceptual feature in the vein of Wreck-It Ralph as The Lego Movie builds a film around the world and legacy of its tool for entertainment. Wreck-It Ralph offers an animation scheme modeled upon the history of video game characters with old pixelated characters juxtaposed with the sharply rendered 3-D whiz kids of the newfangled games, and The Lego Movie similarly trucks out all the pieces that have built the toy into a lasting joy. The Lego Movie is a creative wonder to behold, since the thrill of seeing extravagant set pieces built with tiny bricks is a joke that never loses steam throughout the hour and forty minutes of the film’s running time. The film even highlights the special edition Legos that have kept the toy fresh throughout the years, as The Lego Movie moves between settings, genres, and worlds, and offers old favourites like Lego Batman to turn the film into a laugh-a-minute riot. The special edition pieces even offer numerous in-jokes to the adults of the room, offering pop-culture references and double entendres, and they’re bound to bring out the kid in everyone as The Lego Movie makes older viewers nostalgic for past playtimes.

The Lego Movie’s trademarked escapism offers the best toy-turned-movie since Clue. Take that statement with a dose of irony since the only competition for The Lego Movie might be the 2012 blunder Battleship. Less ironic, though, is the legitimate fact that The Lego Movie marks Liam Neeson’s best film in years. (He also did Battleship.) It might take a greater investigation than solving the mystery of who killed Mr. Body to discover why The Lego Movie works as well as it does (it will be equally difficult to solve the riddle of Neeson’s career trajectory), but watching The Lego Movie is even more fun than one could ever imagine.

Clue probably had an easier time adapting itself for the screen, since the board game features the aforementioned whodunit premise. Lego, however, is just a pile of interlocking blocks. There’s a flimsy piece of instructions in each box, but that’s it.

It’s no small feat, then, that the creative powers behind The Lego Movie had a flash of genius akin to a pair of tots who dumped out their buckets of Lego blocks onto the floor and built a city from scratch. Phil Lord and Christopher Miller mash the pieces of Lego together in a playful potpourri and show that the best Lego creation is one that builders make by themselves. The sheer brilliance of The Lego Movie is that is brings the inanimate to life, as all good animation should, and offers something fresh and new by re-imagining a classic toy in the most unexpected way. It’s a most random concoction, but The Lego Movie is just so far-out crazy that it works.

The Lego Movie is now playing in wide release.


What did you think of The Lego Movie?