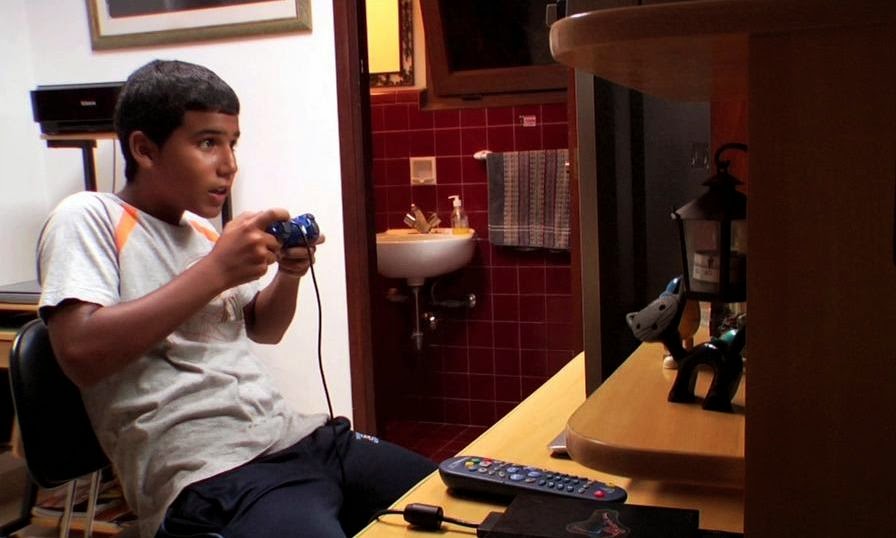 Is it any coincidence that the back-to-back Cuban selections at the 2013 and 2014 Latin American Film Festivals are family-friendly films? Probably not, but this year’s Habanastation is sure to please any fans of the Cuban musical And Nevertheless… that screened at the festival last year. Habanastation might not have the novelty or flair for originality that makes And Nevertheless… such a charming film, yet this broad Cuban offering is fun and inviting. It’s a refreshing piece of world cinema for a Friday night.


Habanastation comes to LAFF with a host of laurels that includes some festival wins and the status as Cuba’s official submission for Best Foreign Language Film in the 2011 Oscar race (the year A Separation won). It’s a notable entry for the festival, if only for its utter irresistibility. It’s a nice little joy of a film to watch.

Habanstation presents two classmates from different walks of life. Mayito (Ernesto Escalona) hails from a wealthy family (his dad’s a popular jazz musician) and he’s never been lacking for comforts. Director Ian Padrón shows the audience the comfortable living this young boy enjoys by inviting the audience to sit with Mayito and his family as they share a meal. Glasses of wine are poured while Mayito’s father, Pepe (Luis Alberto García) cuts a greasy chicken. Mayito even asks for dessert and has the gall to chirp the old PlayStation in the den, unaware that his father has just purchased a new PlayStation3 for his son to enjoy. It’s a home of luxury.

Carlos (Andy Fornanis), on the other hand, lives in a shack in a rundown corner of Havana called La Tinta, which earns its name for the mucky (re: polluted) creek that runs through the slum. Carlos earns his keep living with his grandmother (his dad’s in jail) and he’s never enjoyed a PlayStation. He collects bottles for coins during his free time and he dreams of amassing enough pesos to buy a kite. Just a little kite, though, for the big one is too expensive.

Mayito gets a taste of Carlos’s lifestyle when he is separated from his class during the march at Havana Square for the May 1st festivities. He boards the wrong bus and decides to jump off in a dodgy part of town, and Carlos just happens to save him from some local goons. Mayito spends the day learning about life on the other side of the fence as Carlos shows him a lifestyle where kids cannot play video games with the flick of a switch and where luxuries are earned through hard work and communal goodwill, rather than as an allowance doled out from one’s parents.

It’s no coincidence, however, that this life lesson just happens to occur on the first of May. It’s the day that the students celebrate the legacy of Cuban communism with the class teacher, Claudia (Claudia Alvariño) leading the kids on a march from Revolution Square to Lenin Park. She even leads the class on a little song the day before that goes, “Pioneers of Communism. / We will be like Che.” Habanastation therefore puts Mayito on a little quest of communist goodwill, as he navigates an unfamiliar maze of Havana—not unlike the levels of a video game—and overcomes obstacles that gradually open his eyes to the reality of the world. The film even bounces the young boy’s adventure to the video game-y beat of an electronic score.

Padrón subtly reveals the sizable inequalities that exist in the communist state, however, with the stark contrast in mise-en-scène between the homes of the two boys. One boy lives a life of comfort while the other boy lives in poverty. There’s a rich/poor gap regardless of whatever philosophy the school teaches, and it really isn’t evident to the boys until they get a taste of each other’s lifestyle. Habanstation nevertheless provides a mostly flattering, and ultimately hopeful, depiction of Cuba by whisking the audience through a host of iconic locations as Claudia navigates the hustle bustle of the streets in pursuit of Mayito. The lesson learned, likewise, is one of common good and shared wealth.

Escalona and Fornanis leads carry the film competently while Alvariño makes a strong impression in a supporting role, as does the likable García and the anxious Blanca Rosa Blanco as Mayito’s parents. The young leads take the film on an energetic coming of age story driven by light-hearted humour and flecks of adventure and romance. This youthful film is pleasing in its simplicity. There’s not a lot to Habanastation, but, in the good spirit of communism, there’s a little something for everyone.

Habanastation screens in Ottawa at the Latin American Film Festival on Friday, March 28 at 7:00 pm at Library and Archives Canada.

Please note that actor Luis Alberto García will attend the screening of Habanastation and that the screening will be preceded by a 30-minute performance by acclaimed and internationally-renowned Cuban singer-songwriter Gerardo Alfonso.
(A reception will follow the screening, if one needs another incentive!)