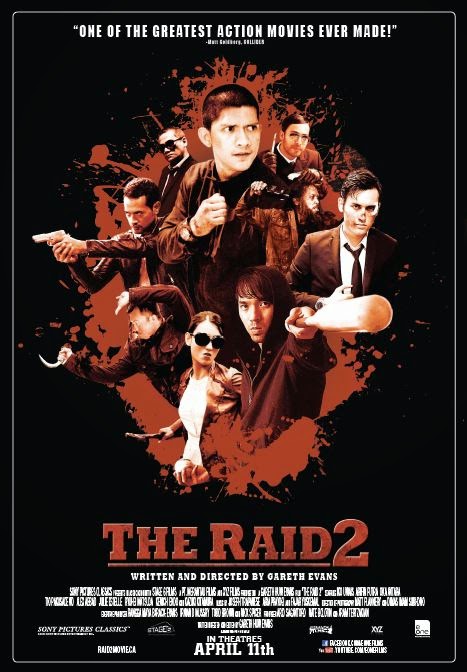 (Sung to the tune of “Mary Had a Little Lamb”)

Everyone’s favourite ode to violence is back! After the mayhem of The Raid: Redemption comes The Raid 2. They’ve upped the body count and sweetened the pot, so if you want tickets to see a sneak peek of The Raid 2 in select cities before it is released in theatres April 11 from eOne Films, answer the trivia below to enter!


Synopsis: Written and directed by Gareth Evans, The Raid 2 picks up right where the first film left off and follows Rama (Iko Uwais) as he goes undercover and infiltrates the ranks of a ruthless Jakarta crime syndicate in order to protect his family and uncover the corruption in his own police force.

Thanks to our friends at eOne Films, Cinemablographer has ten (10) double passes for sneak peeks of The Raid 2 an Ottawa, Edmonton, and Vancouver at the following locations:

The Raid 2 is a follow-up to the sleeper hit The Raid: Redemption. In what programme did the original Raid win the People’s Choice Award at the 2011 Toronto International Film Festival?

Send your answer to contests@cinemablographer.com with the subject “The Raid 2 – [City].”
(Limit one email entry per person please.)
Bonus entries go to anyone who shares this contest on Twitter and Facebook!

The Raid 2 opens in theatres April 11 from eOne Films.