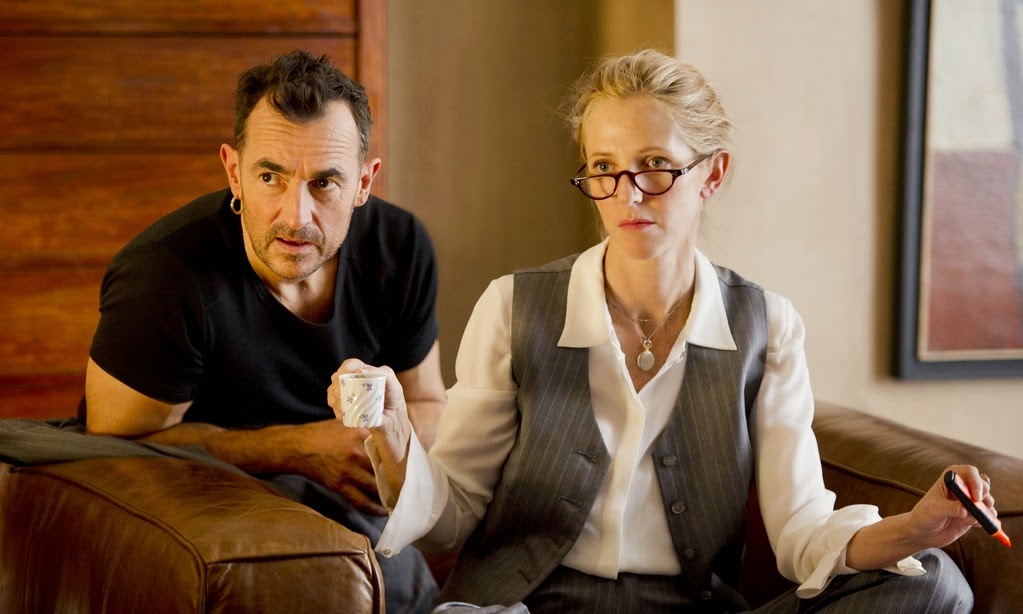 All rise! The court is now in session. The case before us today is Albert Dupontel’s motion picture 9 Month Stretch. It is charged that in March of 2014 that this film did commit the heinous act of unfunny sexism before a public audience. The defense presented its case by revisiting all 82 minutes of footage pertaining to said charge and it made closing arguments in the press notes. The time has come to deliver a verdict.


9 Month Stretch, the record shows, stars Sandrine Kiberlain as Ariane Felder, an uptight moraliser and an ambitious judge with no aptitude for love, marriage, or children. This self-proclaimed celibate career woman is a squeamish stock-type based on the notion that women can’t play dual roles. Ariane gets a chance to be a mommy, though, when her co-workers get her roaring drunk on New Year’s Eve. She turns into the life of the booze-fuelled party and discovers the consequence of her poor life choices when she learns that she is pregnant six months later. Judge Ariane, despite an aptitude for examining the evidence, discerns not an inch that she is preggers. What a terrible sentence for this career woman on the rise!

Judge Ariane’s partner-in-crime during her night of drunken debauchery turns out to be a man on trial. The alleged baby daddy, Robert Nolan (played by Albert Dupontel), supposedly offed a geezer whilst burgling his house and proceeded to dismember him with a power grinder before eating the old man’s eyes in a Hannibal Lecter-ish bit of foodie cannibalism. Ariane is a judge and Robert is on trial. This premise can only lead to one solution.

A host of sitcommy tomfoolery ensues as this respected and intelligent woman behaves like an all-out boob to resolve the baby daddy issue. What exactly Shrill Crazy Woman (née Judge Ariane) hopes to accomplish by tampering with the evidence and hosting the allegedly eye-ball-eating sperm donor in her apartment remains a mystery. No woman in the workplace has seemed like such a scatterbrained ninny since Kim Bauer was kidnapped multiple times from CTU. Ariane is a hormonal mess as played by Sandrine Kiberlain—who won the César (France’s Oscar equivalent) for Best Actress(!)—who doesn’t do her sex any good by amplifying the hysteria up the wazoo while Ariane tries to remedy her foetal misfortune in unfunny ways. Writer/director/star Albert Dupontel lets the plot fly off the rails almost immediately, and the cringe-worthy missteps just keep piling up until the shit hits the fan in the film’s courtroom finale.

Other aggravating factors against the case are a host of disposable gags involving speech impediments and falling objects. A host of cameos by stars should know better also appear, as familiar faces like Yolande Moreau, Gaspar Noé, and Terry Gilliam pop up for novelty (but no comedic effect), while Jean Dujardin nearly offers an amusing play on the silent shtick of The Artist by appearing as a translator for the hearing impaired. The man is a marvel at creating comically grandiose pantomimes, but improvising exaggerated sign language probably isn’t the most politically correct role in which to do it.

The most unfortunate bit of circumstance that could hang 9 Month Stretch might simply be its timing. The film comes at a time when debates surrounding the need to improve roles for women in film (both onscreen and off) are stronger than ever. Roles for women are scant, while filmmakers like Lena Dunham are calling upon the industry to change its tune.

There might be a few legitimate laughs in 9 Month Stretch to offer some mitigating circumstances, mostly in Dupontel’s oafish father-to-be, and the whimsical Amélie-isms in the film’s visuals are far more stimulating than the film itself, but they’re all wholly negated by the film’s problematic and unfunny portrayal of its female protagonist. Ditto a claim for satire, which the defense outlines in its release.

9 Month Stretch! The high court of Cinemablographer finds you guilty on the charge of unfunny sexism. As punishment, you are hereby sentenced to a public shaming.

9 Month Stretch screens in Ottawa at The ByTowne on November 14 and at the Outaouais Film Festival March 14, 16, and 17. It returns to the ByTowne on May 16.