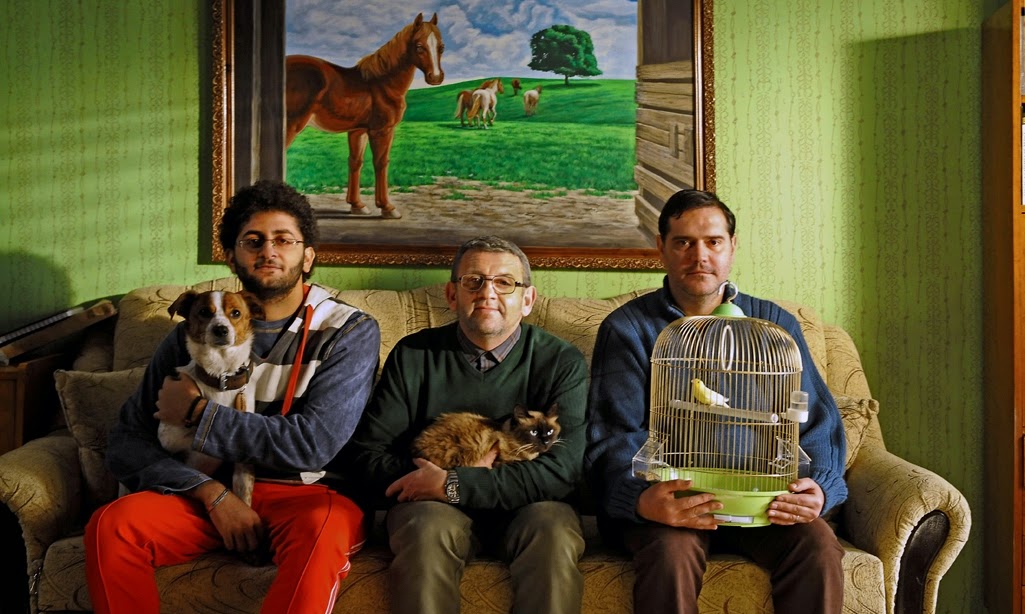 When I’m an Old Communist Hag screened in Ottawa at the European Union Film Festival last November, it felt as if local film buffs were being treated to a one-time glimpse at the hidden funny bone of Romanian cinema. Romania’s DiverCiné selection Domestic, however, suggests that the Romanians have gone two for two when it comes to making comedy. Yes, that ever-popular national cinema so frequently populated with long takes, traumatic abortions, exorcisms, and lesbian nuns (sometimes all in the same film!), actually does comedy pretty darn well. Who knew? Perhaps it’s a question of what kind of film generally gets exposure on the festival circuit, but Wednesday’s screening of Domestic is one that fans riding the Wave won’t want to miss.


The black comedy of Domestic might be of the love-it-or-leave-it variety, yet there’s no denying the droll and subtle ingenuity of this film by writer/director Adrian Sitaru. It’s an extremely simple film—two acts and a framing device—that tells of three families living in one modest apartment. The family members are all pet people, and the threads of a plot Sitaru strings through the film introduce some quirky animals that inject a dose of surrealism to the banality of the domestic setting.

A dog, for example, wreaks havoc on a building, yet finds a friend in Toni (Sergiu Costache), who seems like the protagonist of the film given the dynamic point-of-view long take that introduces the building and its inhabitants from his perspective. A funny bunny in another of the building’s units introduces a droll debate whether animals are pets or meat. Michael Moore, eat your heart out.

The peculiar simplicity of Domestic, however, draws the fine line between people and animals. The animals of Domestic certainly have a personality with their googly eyes and their chipper spirits, but the humour and emotion that erupts sparingly throughout the film is distinctly human. Sitaru underscores the difference between man and beast with the quaint binary halves of the film’s structure. The first half, which is entitled “Domestic Death,” gives the full lesson between two cuts.

The building’s superintendent, Lazhar (Adrian Titieni), brings home a chicken for dinner. It’s a live one, not one of those fancy rotisserie ones from the deli, and his inquisitive daughter, Mara (Ariadna Titieni) asks what’s to be done with the hen. Lazhar, his wife (Clara Voda), and Mara squabble back and forth in a hilarious bit of domestic clucking that Sitaru captures within one static long take that lasts for over ten minutes. It’s hilarious to watch life play itself out with such realistic absurdity. The back-and-forth between the parents—neither of whom wants to kill the hen—is interrupted by the chirps of their daughter, who oscillates between enthusiastic blood lust and bashful guardianship of the hen. The young girl, in these ten minutes, goes from seeing the hen as something fun and cuddly to seeing it as something that must be butchered simply as a fact of the food chain.

Domestic, however, explodes the humour of the situation by seeing Mara put a violent end to the debate over who should kill the chicken as she finishes the bird with a splash of Michael Haneke-grade violence. The splatter of blood that colours the bathroom (she kills the hen in the tub) marks the effectiveness of the long take in capturing this funny domestic episode. While the direction of Domestic could lead one to liken the film to a play, Sitaru consistently offers a comical interplay between foreground and background. Life plays itself out with seeming normalcy at the front of the frame, but it becomes increasingly absurd as the one’s focal point moves back in the frame. Silly squabbles between the parents continue as the chicken’s blood drips from the backsplash, as do visits from the neighbours from whom this horrific interruption of domestic nicety must be hidden.

More long takes pepper the next section, as do more anecdotes about the bond between people and their pets, which can be just as strong as the bond between two humans. A wayward cat, a missing child, and a hilariously tacky horse painting all come together for an amusing, yet relatable, bit of quirky chaos. Death continues to loom large over the film’s second act, “Domestic Life,” which returns the film to the opening funeral scene with which it began. The film reframes the viewers’ perspective on the strange fleetingness of life by taking a person that seems so vibrant and full of life in one lengthy take can be struck down by death’s kiss in the cut between two shots. The funeral scene, though, assumes an air of the uncanny as it becomes a dream-place for Toni, although it’s hard to tell where life ends and fantasy begins.

Sitaru uses the minimalist aesthetic to great effect, for the funereal framing device underscores the tangible realism of the surrounding scenes of domesticity. There’s a great slice of life effect to Domestic that gives the sense of being a fly on the wall in the units of this small Romanian apartment. A layered soundtrack gives Domestic the air of an Altman film as the camera trolls through the building with uninterrupted vision and picks up snippets of dialogue from various residents. There’s a sense of being in the room and a thrill of being a part of the crowd or, better yet, of playing the role of a distant observer looking through a secret window. Domestic is strangely familiar, but it’s strange enough to provide an escape.

Domestic screens in Ottawa at The ByTowne on Wednesday, March 12 at 9:10 pm.

What did you think of Domestic?