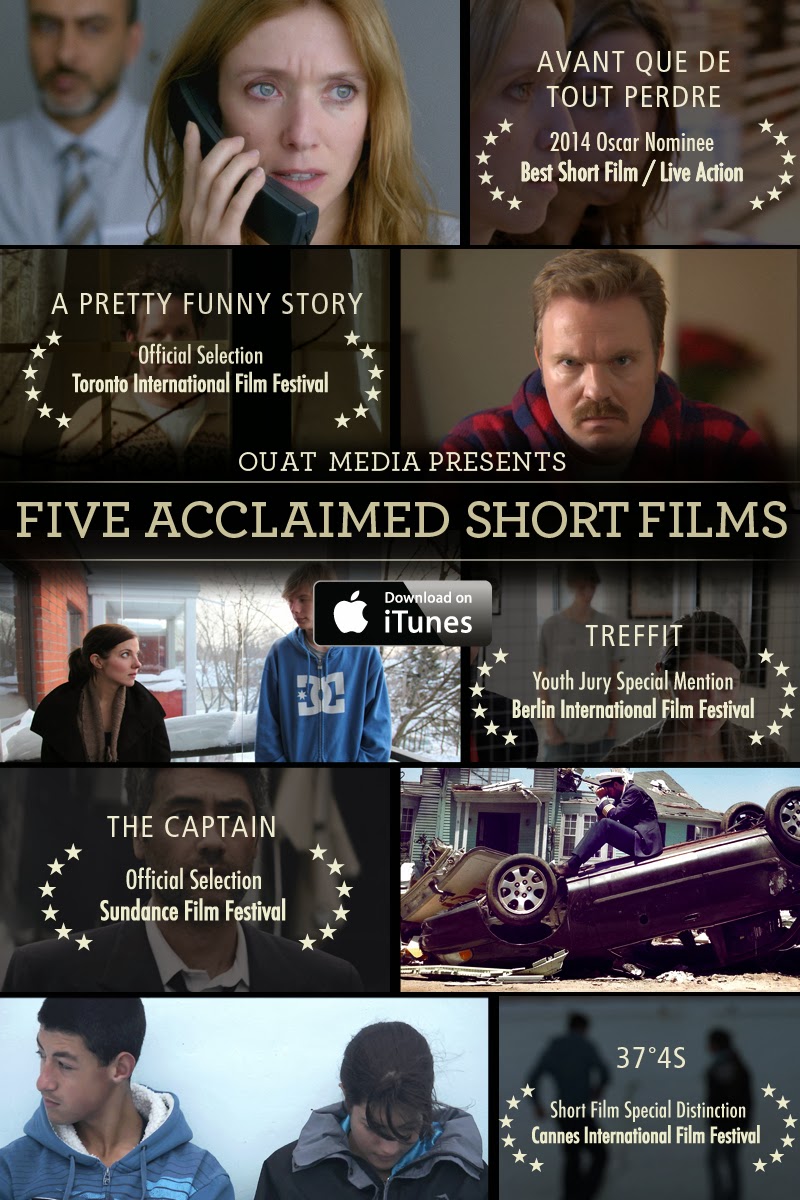 If recent award season completism gave you a newfound appreciation for short films, there’s a new package of shorts worth viewing. “Five Acclaimed Short Films” offers a quintet of international shorts that are worth raving about. This package takes viewers on a trip around the globe and features a handful of festival favourites that offer everything from scathing comedy to searing drama.

Up first in the selection is A Pretty Funny Story (Canada, 19 min.), which screened at the 2012 Toronto International Film Festival and won the Canal + Award for Best International Short Film at the 2013 Clermont Ferrand International Film Festival. A Pretty Funny Story comes from up-and-coming filmmaker Evan Morgan and readers might recall the name thanks to Morgan’s breakout hit The Dirties, for which he served as co-writer/producer/editor. This short offering gives another sample from the impressive body of work of this emerging talent. A Pretty Funny Story, like The Dirties, is black comedy at its finest. It begins as a familiar domestic farce when Rick (Justin Skye Conley) spies his neighbour (Jimi Shlag) doing an awkward funny dance in front of the window. Rick calls his wife (Erin Hicock) to join him for a giggle, but their unneighbourly voyeurism gets the better of them when the neighbour realizes his jig is the butt of a joke.

Nothing is more fun than spying on the neighbours—especially in cold, snowed-in Canada—but teasing turns to terror as drastic reprisals ensue and Rick, Brenda, and their son Michael (Ezra Sherman) find themselves victims of a wickedly funny revenge plot. Rick, placed in the absurdly hilarious peril of holding a juicy anecdote in one hand and his son’s fate in the other, must watch his words carefully lest he trigger the wrath of the cartoonishly evil neighbour. Morgan’s hand at dark, twisted comedy takes the domestic drama of A Pretty Funny Story to unexpected places as the banality of family life gets a hairline fracture of absurdity. A Pretty Funny Story becomes increasingly preposterous while the family plays nice with the neighbour, yet the laughs rise until the film’s riotously bonkers finale. This laugh-out-loud funny short gets the programme off to a great start.

The line-up changes gears to offer the dramatic short 37º4 S (France, 12 min.) and whisks viewers from the suburban malaise of humdrum Canada to the picturesque island of Tristan da Cunha. Tristan da Cunha, located in the middle of the Atlantic Ocean, has a population of only 270 people; however, as the narrator, Nick (Riaan Ripetto), explains, the island will be short one of its most valuable residents when his long-time lover reveals that she is moving to London. Shot in a sweepingly contemplative fashion by writer/director Adriano Valerio, 37º4 S follows Nick as he reflects upon his relationship and takes in the sights of the island that has defined his relationship with Anne. The striking cinematography by Valerio and Loran Bonnardot is stark yet arresting as it captures the arresting scenery of the island with a tinge of elegiac dreaminess.

The fog that lingers over the mountains and blends with the island’s grey sky shrouds Nick’s tale in a melancholy atmosphere while the crashing waves at the seaside convey anger and misery. 37º4 S evokes comparison to Andrea Arnold’s windswept Wuthering Heights and its sumptuous cinematography by Robbie Ryan as Valerio’s camera follows Nick around the island and takes in the sights of the evocative landscape. The immediacy of the handheld camerawork is freeing while the natural elements of the island beautifully shape Nick’s state of mind. It’s a sombre story, but Valerio’s camera brings it to life with an electrifying sense of freedom: 37º4 S is a moving ode to lost love.
The centrepiece of this selection of international shorts, though, is easily the riveting Just Before Losing Everything / Avant que de tout perdre (France, 29 min.), which I reviewed as part of the Oscar Live Shorts programme and dubbed “nothing short of a masterpiece.” This flawless film by Xavier Legrand should have taken home the gold on Oscar night, and it’s an excellent film regardless. Legrand thrusts the viewers into a delicate family drama as a mother (a phenomenal Léa Drucker) tries to extricate herself and her children from an abusive environment. Taut and paced with precise meticulousness, Just Before Losing Everyone wastes not a second of its near-thirty-minute running time after hooking the viewer with the opening frame. The film deftly illustrates a realistic scenario of domestic violence through its dexterous screenplay that navigates both the awkwardness and the intangible elusiveness with which people confront abuse. It’s a film that improves upon repeat viewings even though it’s perfect the first time around.

Domestic troubles of a different kind appear in the light-hearted comedy The Date (Finland, 7 min.), which provides welcome relief after the mesmerizing breathlessness of Just Before Losing Everything. The Date is a playful dance of innuendo and double-entendre, so it’s a remarkable follow-up to Just Before Losing Everything as one watches back-to-back films strike dramatic and comedic notes, respectively, by approaching their subjects with such subtlety. Tino (Oskari Joutsen) puts the prowess of his family’s feline stud Diablo to the test when he agrees to let Mirka (Anna Paavilainen), a young female friend of the family, bring her female kitty to breed. Tino’s manliness is up for scrutiny, too, as he serves Mirka and her mother coffee and cookies (with neatly folded napkins) and coaxes Mirka’s fears about their cats’ coupling. Mirka’s cat, see, is having her first time, so Tino explains above all the growling and hissing coming from the other room how Diablo will be kind and gentle. (That’s how he developed his way with the ladies!) Writer/director Jenni Toivoniemi balances this amusingly awkward scenario with both heart and humour. The Date is just as sweet as it is funny, and the lo-fi minimalism of the affair adds to the quirky character… catcalls and all.

The final film of the programme is the shortest, but The Captain (Australia, 5 min.) is powerful for its malleable brevity. Directors Nash Edgerton (who made the terrific Aussie thriller The Square) & Spencer Susser (Hesher) introduce a startling (an impressively realized) crash site where a lone survivor stumbles around the ruins of an airplane. The film offers neither context nor words to explain the wreckage through which the survivor sifts. This effective film is an impressive feat of production design and visual effects, and an even greater coup for economical storytelling. The quick finale of The Captain has an effective openness that invites viewers to create the rest of the story and explain for themselves the story of the lone survivor.

The “Five Acclaimed Short Films” package is available on iTunes from Ouat Media.