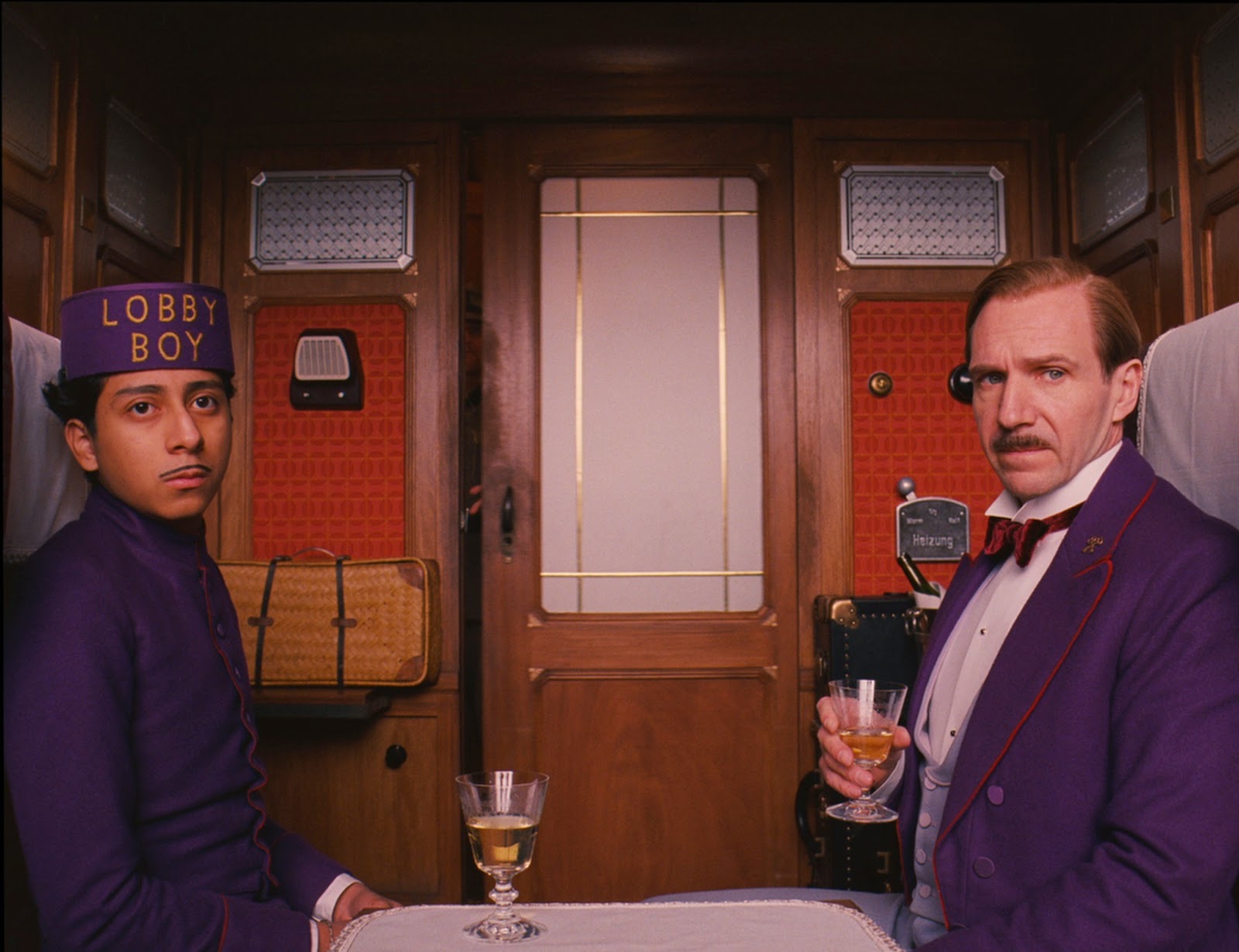 It’s rare to see a line-up at the movies in Ottawa unless one is hitting up the ByTowne on a Friday night, catching the latest dose of midnight madness at the Mayfair, or seeing the hot ticket of the European Union Film Festival. Line-ups at Ottawa multiplexes, on the other hand, appear mostly in the bizarre subculture of contest people who frequent the freebie screenings that happen in town on Wednesdays and Thursdays. (Unsubtle plug.) A great heap of delight, however, greeted the city of the cinematic vacuum as hordes of moviegoers left the urban core perchance to RSVP on a cordial invitation to celebrate the release of Wes Anderson’s The Great Budapest Hotel this weekend.


Perhaps the prospect of seeing Tilda Swinton in gobs of make-up mislead misled some folks to assume that The Best Exotic Budapest Hotel is a sequel to that Judi Dench/Maggie Smith movie, but Anderson’s film clearly has significant word of mouth if one also considers that Budapest didn’t even garner a review in Friday’s Ottawa Citizen. The Grand Budapest Hotel marks the first legitimate line-up I’ve seen at an Ottawa multiplex in years that wasn’t for a free advance screening. Believe it or not, people will actually pay to see a good movie.

Pardon these twists in perspective and shifts in tense, but reviewing The Grand Budapest Hotel demands an element of storytelling since Anderson’s madcap film is wholly indebted to the magical thrill of embellishing a tale of the past with rhetorical trills and token insights. Budapest offers a story (or story within a story [within a story]) as an young girl reads a copy of “The Grand Budapest Hotel” while the book’s author (Tom Wilkinson) relates a story about how his younger self (Jude Law) encountered the story of the Hotel, which he learns from the hotel owner (F. Murray Abraham), who tells him a story about his younger self (Tony Revolori) and his adventures with the hotel’s previous concierge (Ralph Fiennes). The Grand Budapest Hotel is a nutty caper as only Anderson could envision it, for it has a storybook playfulness and an idiosyncratic intricacy that seems wildly convoluted on paper but is truly delicious in its fully discombobulating cinematic form. Budapest is a zany hoot.

Every role of the multigenerational and multi-layered tapestry is cast to perfection beginning with a brilliant lead performance by Fiennes as The Grand Budapest Hotel’s chief concierge Mr. Gustave H. It’s rare to see Fiennes play against type and deliver a performance that is so riotously funny. The actor’s body of work offers no equal to his comic turn in Budapest, save perhaps for his scene-stealing performance in 2008’s The Duchess, but the usually sober Fiennes reaches hilarious heights by playing the role with the utmost seriousness. Gustave, a prim dandy, lets Fiennes play the straight man while Anderson’s directorial energy fills the rest of Budapest’s 4:3 frames with quirky energy that explodes the comedic potential of the performance to hysterical lengths. It’s simply a brilliant feat of casting that caters perfectly both to and against one’s expectations. 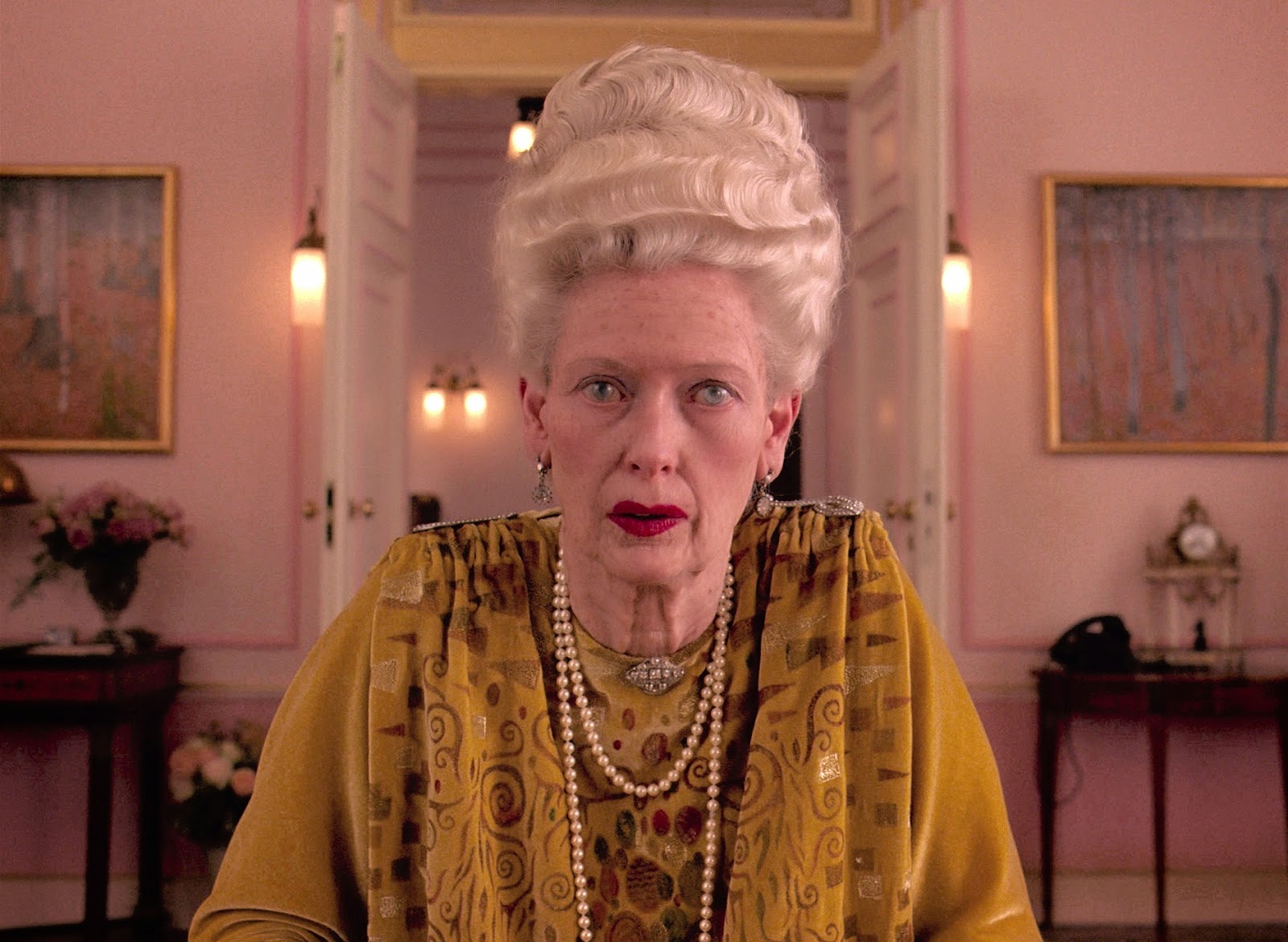 The farcical episodic plot of The Grand Budapest Hotel sees Gustave take the rap for bumping off one of the Budapest Hotel’s most famous guests, the Dowager Countess Madame Céline Villeneuve Desgoffe (played by a scene-stealing Tilda Swinton in an outstanding make-up job). Gustave has a reputation for providing attentive room service to his elderly (and richly endowed) patrons, so the untimely (and suspicious death) of Madame D. puts Gustave and Zero on a bizarre investigation as they follow the clues to solve a whacky whodunit set amidst a Fascist-era political backdrop that puts the fictional European setting of Zubrowka into perilous turmoil.

Fiennes’s co-lead Tony Revolori makes a welcome debut in his awkwardly amusing turn as the young Zero. His hand-drawn pencil mustache accents the character with a twist of quirky charm to make Zero’s demure presence endearing. Gustave and Zero meet a colourful cast of characters played by a roster of Anderson regulars along the way—highlights include Willem Dafoe as a vampiric goon and Jeff Goldblum as a cat-loving lawyer—and each kernel of the peanut gallery sends The Grand Budapest Hotel into another loony direction. Especially likeable are Law and Abraham as two of the film’s central storytelling figures: Law is an affable ear for the audience while Abraham boasts a jovial charisma to stretch the film through its decades of playful history.

Anderson’s execution of The Grand Budapest Hotel, however, has just the right element of morbid whimsy and just the right heft of refined pseudo-theatricality to grant him the title of Budapest’s master storyteller. The director’s signature style is the real star of the film, for The Grand Budapest Hotel culminates Anderson’s use of a singular setting as a guiding force of a film to new heights. The Budapest Hotel itself is the dominant character in the film, as Anderson’s use of place and space consistently integrates the facets of the hotel’s design into the offbeat movement throughout the frame. Moreover, the director’s compositions with cinematographer Robert D. Yeoman figure the hotel as a stage for action by devising tableaux shots that foreground the physicality of the hotel and by inflecting the set with theatrical lighting. The interplay between 1.37 Academy ratio in the 1930s storyline and 1.85 widescreen in the Law/Abraham thread also allows The Grand Budapest Hotel to offer distinct plays on spatial relations as the ponce of the Gustave-era hotel bursts out of the frame while the modern Budapest Hotel is a cavernously tacky space of warped perspective.

The Grand Budapest Hotel is a feat of production design (Adam Stockhausen and the team of art directors/set decorators will be remembered at the end of the year if there’s any justice) for Anderson and his team transform a vast, turn-of-the-century department store into an ornately grandiose setting that brims with life and character. Anderson’s situation of The Grand Budapest Hotel’s fictional Alpine setting of Zubrowka in the UNESCO World Heritage town of Görlitz at intersection of Germany, Poland, and the Czech Republic gives the film a unique fusion of timelessness and East-meet-West culture. The Grand Budapest Hotel spans decades and the production design of the hotel devolves with the passage of time. Gustave runs a prim and stately hotel in the 1930s, but the Budapest crumbles into a gaudy mess of fluorescent lighting and “Mad Men” era furniture come the day of Zero Mustafa’s leadership. Each era of the hotel is adorned with an immaculate attention to detail as the decorations, props, and trimmings are tailored perfectly to accent the character of the era. Ditto the impeccable costumes by Milena Canonero (Marie Antoinette), which play with the elasticity of time and memory while outfitting each character in a distinctly Andersonian garb of peculiar duds.

The film culminates with a wild energy as the busy picture bounces along to a sprightly tempo of stop-motion quirkiness and screwball farce. The editing by Barney Pilling drives the film at a whacky pace while the ecstatically involving score by Alexandre Desplat infuses The Grand Budapest Hotel with a unique character. Desplat has truly outdone himself with Budapest.

What did you think of The Grand Budapest Hotel?